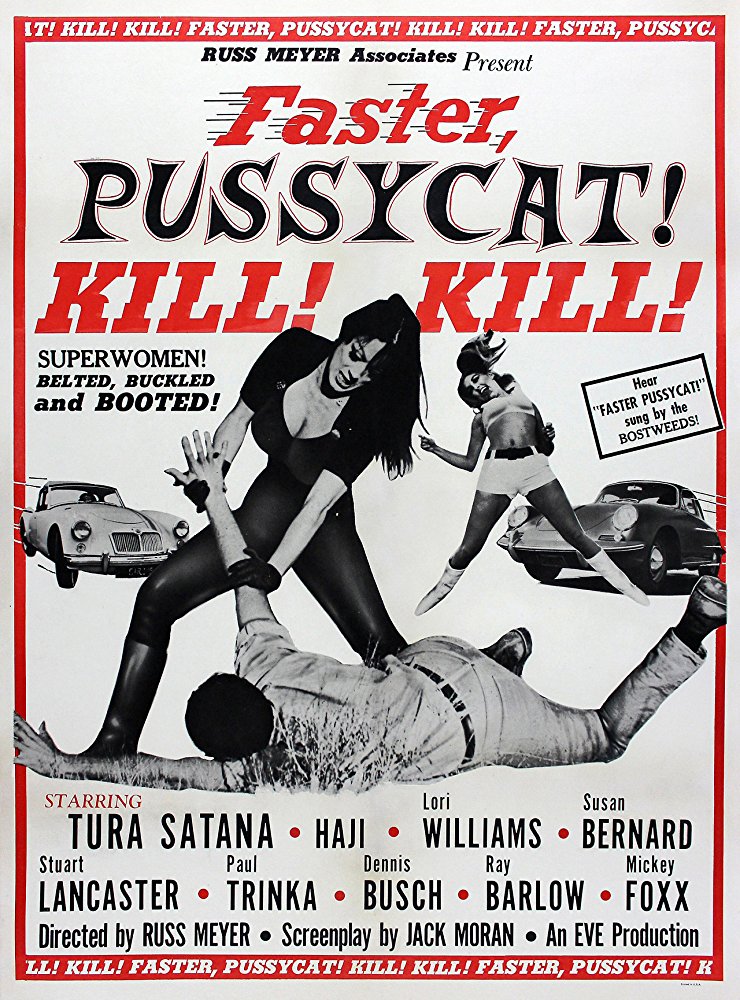 Doing this Cinematic Century project has really given me an appreciation for the strange ebbs and flows of cinema. Some years we’re given an absolute deluge of fantastic films that I would love to write about, creating a battle royale for which one is going to get the honor of me rambling about it. And, other years get pretty lean, full of films that are decent enough, but none that really feel like they need to be discussed in this amount of weird depth. 1965 is kind of one of those later years. Because, looking at a list of films released I’ve come across a strange pattern. There’s a lot of entries in series I enjoy, but that happen to be some of my least favorite additions. Such as Thunderball. I’ve talked about James Bond to an absurd degree on this site, even talking about From Russia With Love just a few weeks ago. But Thunderball? It’s one of my least favorite Bond films, making it clear that I don’t need to talk about it this week. Likewise, I absolutely love Sergio Leonne’s Dollar’s trilogy, but For a Few Dollar More is easily my least favorite of the three. We also had two giant epics of the era, neither of which I’ve seen, and neither of which I’m particularly interested in. I’ve gained a lot of appreciation for musicals, but nothing about the Sound of Music interests me, and what little I’ve seen of it confirms that I don’t need to put myself through its grueling run-time. Just not my cup of tea. Likewise, I’m sure people love Doctor Zhivago for good reason, but it just doesn’t really appeal to me. And, speaking of things I’m relatively ashamed I don’t enjoy, Alphaville! I have no idea why French New-Wave cinema doesn’t do a damned thing for me, but every film from that movement I’ve sampled has bounced right off of me, not connecting in the slightest. And I was hopeful that a weird dystopic noir would be the one to finally crack me. But it wasn’t. Luckily though, one the exact opposite side of the spectrum of “taste” lies a film that I unabashedly love. A film that helped create the “cult” movie culture that exists today, and one that has become a perennial guilty pleasure. Russ Meyer’s Faster, Pussycat! Kill! Kill! Let’s get sleazy folks.

Now, in case you aren’t familiar with the oeuvre of Russ Meyer, or only know him as a Seinfeld reference, let’s dig into one of the  strangest filmmakers of all time. Meyer, who got his start making films as a camerman in World War II, took his job incredibly seriously, and was involved in almost every level of the craft. He wrote, directed, produced, shot, and edited most of his films, taking complete control over them and running an incredibly regimented and tight ship. Which, seems to go against the fact that the film Meyers made were some of the sleaziest and most titillating films available at the time. When you look at Meyers’ filmography you usually see it associated with the term “sexsploitation,” a subgenre of the exploitation genre that specifically tried to make films revolving around sex, nudity, and all manner of depravity. And Meyer was one of the kings of the genre, tossing out a stable of sleazy and campy films that predominately played in drive-ins and grindhouse theaters across the country. And, his highest peak has to be Faster, Pussycat! Kill! Kill! It’s without a doubt his most famous, most iconic, and best film, and it’s really the only one that’s worth seeing, unless you’re an aficionado of sleaze. It’s an utterly fascinating film, and was oddly enough one of Meyers’ only financial failures. At least when it first came out. People at the time hated this film. But, as happens so many times in these Cinematic Century posts, it has only grown in stature in the ensuing years. Hell, there are some people who consider it an oddly feminist film nowadays, which is a little mind-blowing. But, putting all of that aside, this is still an insane film that remains unlike anything I’ve ever seen. So, Ladies and Gentlemen. Welcome to Violence.

Faster, Pussycat! Kill! Kill! follows three women named Varla, Billie, and Rosie. They begin the film dancing at a go-go club before racing out into the California desert in their matching sport cars. The three women are planning to go on a hedonistic rampage, doing absolutely whatever they want, social norms be damned. And, while having fun racing around the desert, playing chicken, they come across an all-American couple having some fun in the desert. Tommy and Linda, the young couple, are out in the desert so that Tommy can run time-trials on his car while Linda mans the stopwatch, and they end up encountering the three women, confused at what they’re doing. Varla starts insulting Tommy, and ends up challenging him to an actual race. Tommy agrees, and after Varla swiftly defeats him, his wounded pride causes the two to get involved in a fist-fight while Linda looks on in horror. And, at the end of the fight, Varla ends up breaking Tommy’s neck, killing him. Linda faints in terror, and the three women decide to flee the scene, and bring Linda with them so she can’t become a witness. The women race off into the afternoon, and end up stopping for gas in a small town, where they learn about something that piques their interest.

Outside that small town lives an angry, handicapped, Old Man who won a massive settlement from the railroad after crippling himself. He lives in a compound with his two sons, and is reported to be a total miser, hording all of that settlement money. So, Varla and the gals decide that they should go find this Old Man, steal his money, and go start their new lives. Plus, they can use the still passed out Linda as an excuse, claiming that she’s a politician’s daughter that they’re rescuing, and need help. They then drive out into the desert once more, and come across the Old Man’s home. But, they pretty quickly realize they’re in over their heads. The Old Man is mean, misogynistic, and completely paranoid, and does not approve of these liberated women coming onto his land. Varla doesn’t want to give up though, and the women end up having an awkward lunch with the Old Man and his two sons. Varla becomes interested in the elder son, an intellectual man named Kirk, while Billie starts lusting after the younger son, who they just call the Vegetable due to his mental deficiencies and hulking frame. Varla attempts to seduce Kirk while Billie plies everyone with alcohol, hoping to find the secret location of the Old Man’s money.

However, everything starts to fall apart when Linda attempts to escape. Varla was busy making out with Kirk, Rosie was lamenting the fact that she’s secretly in love with Varla, and Billie was passed out drunk, so Linda is able to flee into the desert, causing everyone to give chase. They all end up meeting up in the desert, and Kirk finally starts to lose it, announcing that he’s leaving his father’s control and taking his brother with him. The Old Man pitches a fit, and everyone starts heading back to the home, while Varla starts to hatch a plan. She’s decided that this whole thing has gotten too dramatic, and tells the other girls that they need to just kill everyone and flee. Billie can’t abide that much murder, and decides to leave the other two girls, going her own path, earning her a knife in the back from Varla. And, with that murder, things really start to pop off. Varla ends up getting into her car and hitting the Old Man with it, killing him and finding that he kept all of his money inside his wheelchair, while Rosie goes to deal with the Vegetable. Unfortunately, he becomes incredibly distraught when he finds Billie’s corpse, and ends up killing Rosie with the blade. Varla hits him with the car too, but only manages to stun him, before heading out to find Kirk and Linda. They manage to avoid Varla’s car, causing Varla to hop out and start fighting Kirk. The two get into a tense fight, but the day is saved when Linda gets behind the wheel of the car and uses it to run Varla over, killing her. Linda and Kirk then head back to the house, trying to figure out what in the world just happened to them.

They just don’t make movies like this anymore. We don’t get this sort of super low-budget, sleazy, drive-in theater-grade movie in 2018, and as a result it can be a kind of strange experience to watch Faster, Pussycat! Kill! Kill!  Especially if you haven’t seen many movies that come from a similar vein. Because this film isn’t exactly striving to be high art. It’s full of spotty acting, pure titillation, and rambling plotting. All of which can, and should, be pretty big red flags when it comes to making a movie. And yet, I wholeheartedly think that this movie works. It wasn’t trying to be a masterpiece, it was designed to be entertaining, and it accomplishes that beautifully. It’s quick paced, action-packed, and most importantly, fun. Like most movies of this caliber, the film was completely written off when it came out as pure trash, just a little piece of misogynistic fluff designed for people who are more busy making out at the drive-in than actually watching it. And there’s certainly a lot of films that were made with that mentality, and that have been forgotten to the sands of time. And yet, Russ Meyer clearly was passionate about this film. Maybe he was just “obsessed with breasts,” or maybe he was actually trying to tell a story that people would enjoy. Over the years the film has been reevaluated and more readily accepted. I don’t quite know what the current standing of the film is, and I have to presume that it’s incredibly un-woke. But there’s still just something about it that I find utterly fascinating.

The movie is just pure, fully realized id. It’s dumb as all hell, but it delivers exactly that it promises. It’s full of violence, car chases, and of course sex appeal. And not just in the form of scantily clad women! There’s plenty of beefcake shots of the muscle-bound dumb brother, making it seem like Meyer just wasn’t obsessed with the female form, but the human form. The plot of the film is fun, but rather flimsy. And that kind of seems to be a feature of this film, not a bug. It needed the slightest bit of a plot to hang the various set-pieces on, letting the film be what Meyer actually wanted it to be. Just pure insanity. It’s just a bunch of terrible people acting terribly. And, in a move that is actually surprisingly enlightened for a sexploitation flick from the sixties, it’s willing to show that terribleness in all of the characters. We’re shown a group of women who have their own independent lives, who get to drive around the country doing what they want, drinking and fighting as they please. They’re badass outlaws, and they’re also powerful women. It’s from an incredibly “male gaze” point of view, but it’s still kind of shocking to see a movie from 1965 that is this willing to show women as strong figures who can hold their own in a battle with male criminals. It’s baby steps at least.