Hello everyone, and welcome back to yet another installment of Bat Signal, my ongoing attempt to read every single issue of Detective Comics, in random order, and with basically no context. And we’re going back to the earliest days of the Dynamic Duo this week folks, back to the time period where Batman was a very different character than we’re used to. More violent, more goofy, and more willing to use some truly unremarkable antagonists. Plus, an incredibly strange version of Alfred before they worked all the kinks out. And, in that weird state of flux we find today’s issue, a decent little tale of robbery, violence, and the importance of zip-line safety. Let’s jump in!

The issue begins with a bang, quite literally. We see a group of thugs firing volleys of machine-gun fire into what appears to be the hanging corpse of Batman. As you can probably guess, this isn’t exactly what’s happening, because it’s actually a dummy of Batman that has been strung up for target practice. These gunmen are working for a new thief in Gotham City who goes by the name, the Robber Baron. And, yes, he dresses like a Baron. And, as if that wasn’t enough, he has built a giant stone tower atop the hideout he and his gang use. The Robber Baron and his crew have been quite successful at their heists, and it’s all thanks to a giant grappling hook cannon that’s installed on top of their tower, which they use to fire zip-lines to various buildings in Gotham, scurry across, and steal the belongings of the people in the penthouses of the buildings. Seems like a gimmick that can’t last very long, but it does seem to be going well.

And, as you might have guessed, this little crime spree eventually catches the attention of Batman and Robin. So, one day while the fat and bumbling Alfred is reading about the case in the paper, he heads down to the Batcave to see what the Dynamic Duo is up to. Batman and Robin have found several clues, including the presence of brass shavings and strange marks on the ledges of the buildings. They’ve decided that these marks imply the use of a giant grappling cannon, and have thus used common sense to narrow down the only place the cannon could be, based on the trajectory of the various buildings that have been hit. They figure out the general area of the Robber Baron’s hideout, and Bruce and Dick decide to go for a drive to look for more clues. Luckily, when they get to the area they find a brass works with a giant medieval tower atop it. So, that seemsp retty clear.

Bruce and Dick then head back to the Batcave, suit up, and take the Batplane back to the tower they found. The pair hop down onto it, and immediately find the grappling hook cannon, thus proving their hunch. So, the Dynamic Duo head down into the tower, and come across the dummy that the henchmen had been using as target practice. They’re pretty creeped out by this, but as they’re gawking at it they hear the Robber Baron and the henchmen return. Batman hides behind the dummy, and when the men come into the room he starts practicing his ventriloquism, freaking the men out and buying him the time to attack them. Batman and Robing fight the Robber Baron and his henchmen for a while, but they eventually flee back to the top of the tower, planning on using the grappling hook to escape to a nearby bridge. Batman immediately senses their true plan, but Robin doesn’t really think things through, and starts zip-lining after them, which doesn’t turn out very well.

Yeah, the crooks cut the line while Robin was half-way across it, causing him to plummet down to the icy depths of the river below. Which causes Batman to absolutely lose his mind. He gets into the Batplane and flies over to the bridge while the Robber Baron and his men are busy trying to scramble down, and he starts beating the crap out of them. Batman easily dispatches the two henchmen, but as he begins to charge the Robber Baron he’s surprised by a sudden bullet to the chest. The force of the bullet knocks Batman off the bridge, following everyone else down to the water. And, when the Robber Baron and his men get in a little boat they come across Batman’s semi-conscious body they decide to take it with them, as part of their next plan.

Meanwhile, Alfred has grown quite worried that Batman and Robin haven’t made their way home. And, because he’s apparently taking detective lessons himself, he decides to use what he’s learned to track down the Robber Baron. He follows the clues to the riverfront where the base is located, and is immediately caught by the Robber Baron and his men. They assume he’s nosing around their business, and take Alfred captive, bringing him and Batman to their base. Which is where we learn that they plan on putting Batman, and Alfred for some reason, onto a zip-line to police headquarters, their hung bodies serving as a message that they aren’t to be trifled with. But, as they prepare to murder two men, Robin shows up. He didn’t actually die after falling off the bridge, obviously, and after watching the men kidnap Batman he got into the Batplane and has been trailing them. His appearance throws the villains off guard, and Robin’s able to free Batman and Alfred, and together they’re able to defeat the criminals, and bring them to justice.

This entire project has been quite fascinating, watching the various permutations and evolutions of the characters of Batman and Robin over the years, which is made so much more stark by the insanely scatter-brained manner I’m going about it. And one of the more bizarre periods of the Caped Crusader’s career has to be these early stories. Because while they pretty quickly got a hang on most of the tropes that would come to make up a Batman story for the next century, there are elements of these early issue that just seem so out of place. The biggest and most noticeable one is probably Alfred, who was a completely different character in these stories. But, I’ve already talked about the very issue that Alfred abruptly changes from this goofy comic-relief character to the one we know and love. Other than that though, I’m fascinated by how goofy Batman was. Yeah, there was plenty of grim murder in this story, like the idea of the villains sending Batman’s hung corpse to the police. But we also got to see Batman tricking villains with ventriloquism. They really couldn’t quite land on a tone during this era of the comics, and that makes them all the more strange. Which helps, because otherwise this would be a pretty run of the mill story. But it get bonus points for weirdness.

“The Robber Baron” was written by Don Cameron, penciled by Jack Burnley,  and inked and lettered by George Roussos, 1943. 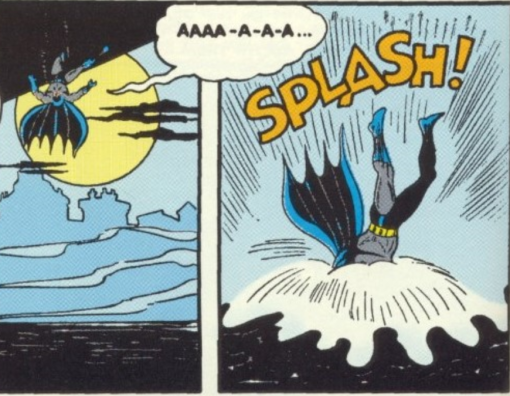