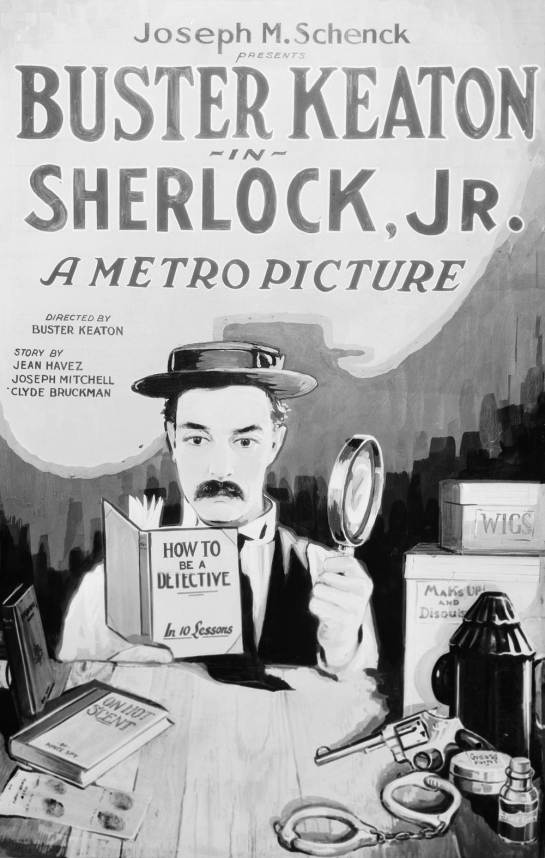 We have another week of the Cinematic Century, and another classic silent comedy. Actually we have a couple more comedies in the upcoming weeks, giving ourselves a nice little marathon. And, to make things even better, we have the first film from Buster Keaton to be featured on this project. As I’ve said in previous installments of Cinematic Century, there are three primary stars that are associated with silent comedy, and Buster Keaton is the last one for me to discuss. Charlie Chaplin is still my favorite of the trio, but Buster Keaton is right behind him. Harold Lloyd can still be pretty fun, especially in last week’s Safety Last!, but it’s Chaplin and Keaton who I come back to time and time again. And today’s film, Sherlock Jr, is one of my favorite films of the silent era. Which made it pretty obvious that this would be the film I’d be discussing for 1924. Because, really, there weren’t a whole lot of other options. There were a few other Keaton shorts, some Harold Lloyd flicks, and of course von Stroheim’s Greed, which I’ve actually never seen. Kind of a big blindspot. But, regardless of that, Sherlock Jr is not a film that I’m discussing as a last resort. Because this film is a great time, and it was a joy to revisit. It’d been too long since I’d seen Sherlock Jr, and it’s kind of mindblowing to see how well this film holds up, and how innovative and impressive it was.

And while this film certainly tells an interesting story, I’m also kind of equally fascinated by the backstory of the movie. I usually like to do a tad of research, finding out some of the production stories for these movies I’m featuring, and I think Sherlock Jr may be the most interesting one I’ve found yet. Apparently when Buster Keaton was looking for a director for this project, he decided to give a shot to veteran Vaudeville and silent actor Roscoe “Fatty” Arbuckle. Now, this was several years after Fatty Arbuckle’s career was destroyed after some rape allegations, which I don’t believe we’ll ever know the truth about. But, Keaton wanted to give Arbuckle another shot in Hollywood, and ended up regretting it. Arbuckle was apparently a nightmare to work with, and ended up getting fired half–way through production. And, beyond on-set drama, the film was plagued with accidents, even leading Keaton to break his own neck while performing one of the stunts, since he insisted on doing everything himself, seemingly without concern of the danger. But, it all the drama and pain was worth it to Keaton, who apparently based the whole film off a mental image he had of himself walking into a movie screen. And you know what? It was probably all worth it, because this is a hell of a film.

Sherlock Jr is the story of a young unnamed man played by Buster Keaton. The man is a projectionist at a local movie theater, but in his spare time he’s taking lessons in detection, hoping to quit his job and make a good living as a the world’s greatest detective. He’s in love with a young woman, and is trying to do everything he can to win her affections, and convince her father that he’ll make a good husband. He even changes the price of a box of chocolate on it’s receipt to make it looks like he was able to spend four dollars on her rather than just one. The girl does seem to be in love with the Projectionist, but he has a rival in the form of a local conman that the film calls the Sheik. Both the Projectionist and the Sheik end up at the Girl’s house at the same time one day, and while the Girl is distracted with the Projectionist, the Sheik is able to steal a gold pocketwatch from the Girl’s father, and pawn it before anyone can notice.

However, when the Father does notice his watch missing, he starts making a large fuss, and seeing an opportunity to ingratiate himself with his potential father-in-law, the Projectionist offers to use his detective skills to find the watch. The Sheik panics a bit, and manages to slip the receipt from the pawn shop into the Projectionist’s pocket, so that when his investigation ends he himself is implicated. And, to make matters worse, the Sheik got four dollars for the watch, and the Projectionist had just been bragging about having four dollars to spend on chocolate. So the Projectionist is blamed for the theft, and is kicked out of he house. He storms off to his job, hoping to distract himself from the shambles of his social life. And, while working in the projection booth he ends up falling asleep, and finds himself leaving his body. The Projectionist then begins paying attention to the film he’s showing, which has a similar plot to what’s going on in his own life, with a villainous man stealing a beautiful woman’s pearl-necklace.

The Projectionist then  finds that he’s able to walk into the film, which has magically been recast with the people from his life, and join their story. But, here he’s Sherlock Jr, the greatest detective in the world. He begins investigating for the missing necklace, while the Villain and his Butler begin trying to kill the detective. They try to poison him, hit him with an ax, and use an exploding billiard ball. All of which Sherlock Jr survives. He then begins investigating the Villain, and eventually ends up finding his secret hideout, where he’s preparing to sell the pearl necklace to some other criminals. Sherlock Jr is able to escape from the villains though, while also learning that the Girl has been kidnapped and taken to a hideout. So, with the help of his partner Gillette, Sherlock Jr is able to take a wild and dangerous motorcycle ride out to the hideout, where he’s able to save the Girl. They have a high-speed chase out of the hideout, and eventually find their way to relative safety. Which is when the Projectionist wakes up from his dream, and finds the Girl waiting for him. While he was dreaming she ended up finding the truth of the watch, and had the Sheik caught. So now the Projectionist is in the clear, and he’s free to be in love with the Girl, his dreams having come true.

Sherlock Jr remains one of the most interesting and inventive of all the silent comedies. I really do love Buster Keaton, and while his films usually don’t have quite the emotional resonance that a Charlie Chaplin film would, he makes up for that with some of the most impressive stunts of the silent era, and a very different brand of comedy that Chaplin. Keaton was a much more wry, and sarcastic comedian than Chaplin, choosing to remain straight-faced rather than have over-the-top reactions to all of the absurdities surrounding him. And Keaton’s flair for dramatic stunts really couldn’t be beaten. He would pull off more impressive feats in other films, but Sherlock Jr is certainly no slouch. Keaton races around on the handlebars of a motorcycle while narrowly avoiding catastrophe, he leaps through a window and comes out in different clothes, he pulls off a baffling stunt where he seems to jump throw a person, and even drives a car around in a lake.

But all of the stunts and gags from this film end up playing second fiddle to the true work of genius that this film contains. The idea of Keaton hopping into a different movie. Keaton has said that the entire movie exists just because of this concept. He had the idea of walking from one film into another, and built a whole film around that idea. Which is great, because it’s a fantastic idea. There may have been films that tackled ideas such as this earlier, but for me this is the earliest example I’ve ever seen of a film about the power of film. The Receptionist is a man whose life is falling apart, and he finds solace in a film. We get a fantastic little scene of Keaton interacting with several blasts of stock footage before fully throwing himself into a dream world where everything goes his way, he’s the person he wants to be, and he saves the day while getting the girl in the end. It’s pure fantasy fulfillment, and as luck would have it, when he wakes up things end up working out in real life too. Because sometimes dreams come true. Sometimes our daydreams, our wildest fantasies, and the stories we tell ourselves end up becoming our reality.