One of the biggest sins that a Simpsons episode can commit is being boring. I’ve seen episodes that are pretty crappy, but that have a bizarre undercurrent to them that help make them enjoyable. And I’ve been seeing a lot of boring episodes lately. But not today. Today we have Mayans, Dennis Leary, a live action Everybody Poops movie, and the Shellbyville bird sanctuary. Things get nutty today folks, so let’s dive in.

The episode starts off with Principal Skinner and Agnes having a lovely drive together while Agnes berates and belittles Seymour. However, things are brought to a stop when they run out of gas on the highway. This leaves Skinner with no choice but to grab a gas can from the trunk and start running across the highway, carefully and barely dodging the speeding cars. It’s a pretty embarrassing sight for poor Seymour.

And lucky for him, Milhouse happens to be standing on an overpass, witnessing the whole thing. So, doing his solemn duty, he whips out his cell phone and starts calling all the kids in class to come watch. And, slowly but surely, the rest of the kids arrive on the overpass to mock Skinner as he tries not to die. Well, not all the kids. There’s one notable exception. Bart. He isn’t there because he’s too busy having a tea party with Lisa, and since he doesn’t have a cell phone he isn’t able to get the news.

After Skinner presumably accomplishes his task some of the kids head over to Bart’s house to make fun of the fact that he missed out. They show him some pictures of Skinner, and he gets pissed. So Bart storms into the house and demands that Homer and Marge get him a cell phone. And they refuse. They try to explain to Bart that they can’t afford to get him a cell phone, and Bart calmly accepts this. Nah, just kidding, he storms off and starts wandering around the town brooding.

But while Bart is storming around he happens to walk by the Springfield Country Club and gets hit in the head with a golf ball. This is a bridge too far for Bart, so he storms onto the golf course to complain. He comes across Dr. Hibbert and gives him the ball, ready to start complaining, when Hibbert gives him some money. Turns out golf balls are expensive, and the golfers are willing to pay Bart for finding them their balls so that they don’t have to buy more. 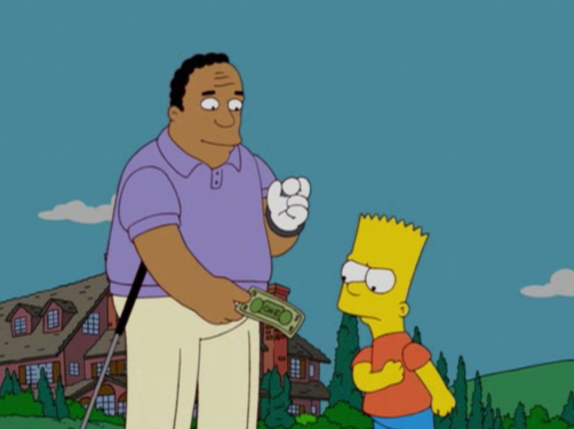 So Bart has a job! He begins wandering around the golf course, stealing golf balls from people and fighting off crocodiles to get as many as possible. And he starts making some decent money. Almost enough to afford his own cell phone. But it all comes crashing down when Willie shows up and steals all of the balls, since this is apparently his scam and he doesn’t want anyone cutting in on his turf. So that sucks.

However, while Bart is lamenting the loss of his job, something ridiculous happens. There’s a celebrity golf tournament going on, and we see that Dennis Leary is competing. Krusty starts heckling him, getting him to furious that he starts throwing things, including his cell phone. And that phone happens to land right next to Bart. So, obviously, Bart decides to steal this phone and make it his own, hoping that they don’t cancel the service.

Bart then heads out into the city, and goes to Milhouse’s house to show off. And Milhouse is pretty impressed that Bart finally has a cell phone, and the two can begin texting each other. But things hit a snag when Bart gets a call from Brian Grazer and decides to answer it. Bart catches on pretty quickly, and pretends to be Dennis Leary, agreeing to star as a constipated gorilla in a live-action adaptation of Everybody Poops. And when this goes off without a hitch, Bart realizes he has a new prank to pull.

A week later we cut to the deserts of Tunisia where a confused and angry Dennis Leary is having to dress like a gorilla and talk about poop, not quite sure why this is happening. And Bart isn’t done, because he also starts using Leary’s phone to prank call bars from all around the world. And while this is going on Leary finally figures out what’s going on, and he calls his phone to threaten Bart and Milhouse.

Bart and Milhouse find these threats hilarious, and keep egging Leary on, which earns them the attention of Marge. She hears them goofing off, and comes in to investigate, and finds the phone. She snatches it from the boys, and ends up talking to Dennis Leary, who fills her in on the situation. But, shockingly, he doesn’t want the phone given back. He’s apparently fine with Bart having it, but he tells Marge that she should turn on the GPS locater so she can keep tabs on him all the time, since it seems like he doesn’t have enough supervision in his life.

Marge is down with this plan, and gives Bart back the cell phone the next day. Bart is flabbergasted by this, and heads off to live his life, oblivious to Marge’s ulterior motives. She and Homer turn on the GPS program, and start tracing Bart around town, following his every move. And thus begins the end of Bart’s shenanigans. Marge shows up everywhere Bart is, ruining his bad behavior. And it’s starting to drive Bart absolutely crazy.

But Marge and Homer love it. And they start to get sloppy with their stalking, letting Lisa stumble upon what they’re doing. And she’s disgusted. She can’t believe the invasion of Bart’s privacy, and goes to tell him what’s going on that night. Bart is horrified, but comes up with a great bit of revenge. He takes the GPS chip out of his phone, ties it to the leg of a bird, and lets it fly off, confusing Homer and Marge.

And it works. Back at the house Homer and Marge see Bart suddenly speed away from the school, faster than they would think possible, until he gets to the Shelbyville Bird Sanctuary. So Homer and Marge grab Lisa and Maggie, and drive off to Shelbyville to catch Bart. And Bart is thrilled. He heads home and finds the family gone, and gets ready to have some time to himself, figuring that it’ll take the family a while to figure out what’s going on.

And he was right, because three days later the family are still chasing the damn bird as it travels south, not figuring out what’s going on. Which means Bart has some time to himself. He invites Milhouse and Nelson over to brag about how great the situation is. They agree, but then head home when it gets dark. Which is when we learn that things aren’t going as great for Bart as he’s letting on. Because he’s terrified to be home alone at night. Like a sane person.

Meanwhile, the family is still heading south, unwittingly following the bird. Well, that is until the bird happens to land on the hood of the car, and Lisa figures out what’s going on. She decides to Google the bird, and finds that it’s heading to Machu Pichu for the winter, a place that she’s always wanted to go to. So Lisa decides to keep the bird secret, and continues to let the family drive to Peru so that she can go on a fun vacation.

The family finally arrive at Machu Pichu, baffled at how Bart has accomplished this. Everyone starts to feel terrible, and Marge is horrified that her son is still missing. She decides to sit down on a stone chair, and instantly passes out and has a vision. She meets a mystical Peruvian who teaches her that while kids need some supervision, they also have to be allowed to be on their own sometimes. So, with this lesson imparted the family head home, after figuring out the bird trick, and find Bart waiting for them. He tries to play it off like he was fine, but admits that he was terrified being alone, and is happy to see them. 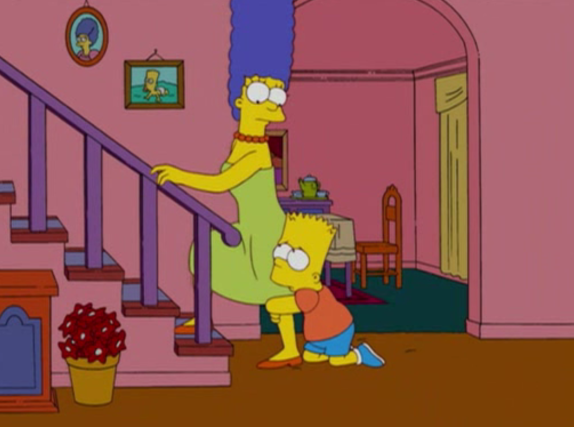 This episode is so incredibly strange, but I kind of find myself enjoying it. The idea of Marge becoming a helicopter parent and watching Bart’s every move and invading all of his privacy is a topic that has the potential to be great, or terrible done. And I think this one handled it pretty well. Especially with that last little lesson she learns in Machu Pichu, because otherwise the episode off as a little sketchy. Dennis Leary’s advice that you should be stalking your child at all times is super weird to me, and one that I don’t like at all. But luckily they saved themselves thanks to a magical Peruvian. And, to make things better, this episode is insane. There are so many bizarre choices to this episode that probably shouldn’t have worked, but did for me. It’s wacky and weird, and has a semi-decent message, and that’s something I appreciate in my later-day Simpsons episodes.

“Lost Verizon” was written by John Frink and directed by Raymond S Persi, 2008.

Tagged as: 2008, Lifetime of Simpsons, Lost Verizon, Season 20, the Simpsons