Well, we’ve made it through another week. We’ve begun the Twentieth Season, we’ve seen what may be the episode I’ve disliked the most of all time, and some generally fine episodes. So there’s no reason to not end the week with another episode that’s just largely okay. Thrilling!

The episode begins with Homer taking Bart and Lisa shopping with him at the Kwik-E-Mart, and hating it. The kids are acting like shits, and Homer is getting incredibly irritated. Apu notices this and tries to calm Homer down with the last lotto scratchy ticket on the roll, and Homer is intrigued. He comes over to grab the ticket, but has to stop when he sees Bart climbing up onto the aisles and preparing to jump off, and he has to race off to stop that.

Homer catches Bart, and in the meantime Lenny has arrived and bought that lotto scratcher. And to make matters worse, he wins $50,000 from it. And, needless to say, Homer is not pleased about this. So Homer storms home with the kids and complains to Marge. Marge tries to talk Homer down at first, saying that Bart’s behavior isn’t too bad, until she learns about the $50,000 and suddenly she’s on Homer’s side.

But that wasn’t enough for Homer, so he heads over to Moe’s to start complaining there too. This was a bad call though, because Lenny is in there, being treated like a hero for winning all that money. But they do have good reason for treating him so well, because Lenny announces that he’s going to blow basically all of his winnings on a huge party for all of his friends, and that they’re all invited. So that’s pretty rad.

We then cut to the night of the big party, and Homer, Marge, and the kids are getting dressed up for it. But we have to be reminded that this is an episode about Bart being an asshole, so he’s got to do something extra horrible, like spraying cat pee on Marge’s dress so she has to wear an alternate. But once that’s taken care of we see that family head to the prestigious Woosterfield Hotel while Homer and Marge complain about how Bart’s behavior might not just be a phase, and something serious they have to confront.

But not yet, because now it’s time for Lenny’s super weird party! He’s apparently rented out a huge ballroom in the Woosterfield and invited basically everyone in town to sit around and watch Lenny sing and talk about how he likes everyone. It’s kind of alarming behavior, maybe something that you would expect to be followed by Lenny announcing he has a terminal disease or something, but whatever, he’s paying for the party.

However, Bart is super bored by Lenny’s weird party, and starts wandering around, stumbling upon a room full of gift-bags that Lenny has bought for everyone. He opens one and finds that they’re full of robotic vacuums, and he gets an idea. Bart opens every single box, turns all of the Roomba’s on, and lets them loose from the room to wreck havoc on the party. The Roomba’s begin swarming the party, attacking everyone and ruining the night.

The police are inevitably called in to deal with the Roomba attacks, and after some minor investigation Chief Wiggum finds Bart in the gift bag room operating the Roomba’s. Everyone is obviously pissed at Bart, and Marge tries to punish him. But Bart just ignores the punishment and continues to be an ass, before walking off to go to the bathroom. And while he’s in the bathroom he finds something completely insane. There’s a boy inside who looks exactly like him.
Bart starts speaking to the boy, and learns that he’s Simon Woosterfield, heir to the Woosterfield fortune. Simon is sick of life as a rich boy, and says that he’s jealous of Bart’s life with loving parents. So Bart decides to screw Simon over, and offers to pull a Prince and the Pauper. Simon surprisingly agrees, and the two boys switch clothes while filling each other in on who their new family members are before separating. 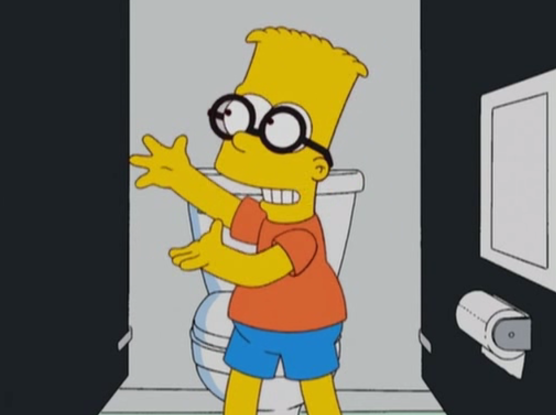 Simon heads outside and gets picked up by the Simpsons, only to find them furious at him, and Bart gets picked up by Simon’s butler and taken to his new home. And Bart certainly gets the best outcome, because Simon lives in a massive mansion in Springfield Heights, the nice part of town. He gets lead to his bedroom, which is full of all kinds of ridiculous things, like a racecar bed that is functional and a “poster” that’s actually just Joe Montana standing still for hours on end.

Meanwhile, Simon is less than thrilled. The Simpsons are obviously not what he was expecting, and he finds their lack of manners and violent outbursts to be disgusting. He even has an outburst during dinner, yelling at Homer for his gross behavior, which starts to raise some red flags for Lisa. And bad things are happening for everyone, because back at Woosterfield Mansion Bart learns that Simon has two half-siblings, and they’re both horrible and hate him.

That night Bart and Simon call each other, tying to fill each other in on what’s going on. They both talk about how hard their new lives are, and agree that this experiment may have been a failure. However, when they hang up Marge shows up to tuck Simon in, and shower him with love, and he realizes that this may be worthwhile after all. Bart meanwhile gets tricked into going into the Woosterfield family mausoleum by his half-siblings, and is locked inside. Whoops.

Bart is saved though by a pretty unlikely person. Mr. Burns. There’s some sort of rich-people party going on at the Woosterfield Mansion, and Burns and Smithers let Bart out of the mausoleum and chat with him. Turns out the Woosterfield’s are worth more than Burns, so he treats Bart well and talks to him about how horrible siblings in rich families can be. He basically admits to Bart that he murdered all of his own siblings to become sole heir, and that that’s probably what these half-siblings are going to do.

Bart starts to panic, realizing that Simon knew his half-siblings were out to kill him and wanted to trick Bart into getting killed instead, so he gets ready to flee. This is ruined though when the half-siblings show up and announce that the family are going to Aspen for a “ski trip” which was one of the suggestions Mr. Burns made about ways they could kill him. So that’s a red flag, but Bart won’t admit who he really is, and has to go to Aspen.

Meanwhile, Simon is getting used to life as Bart, and is spending a lovely evening listing to all of Grandpa’s ramblings. And this is the final straw for Lisa, who confronts Simon and demands to know who he actually is. Simon tells Lisa the truth, including the fact that the siblings are probably trying to kill him, and Lisa forces him to admit the truth. So Simon tells Homer and Marge, and the family race off to Aspen to save Bart.

Simon and the Simpsons arrive in Aspen just in time to witness Bart almost die. The siblings push Bart down a black diamond ski trail, hoping that he’ll crash and die. Homer springs into action though and grabs Bart, causing the two to roll down the mountain and become a giant snowball. There’s some slapstick goofiness with the snowball, but they eventually get down to the bottom, mostly fine, and Simon is returned to the Woosterfields and Bart comes home with the family. 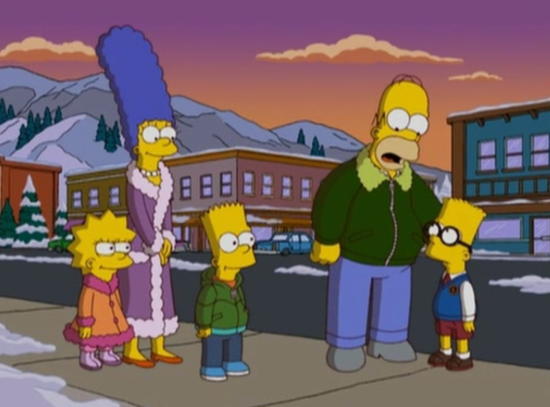 I’m kind of shocked that it took this long for them to try and do a Prince and the Pauper episode of the Simpsons, and I guess that this is a serviceable story. My main complaint about the episode is the same one that I have with most episodes that revolve around Bart being an asshole, and that’s the fact that they make Bart so goddamn horrible. Bart is a monster in this episode, until he starts almost getting killed by his fake half-siblings, and that plot is so overdone. We’ve seen way too many episodes about Bart being too bad, and Homer and Marge debating whether or not this is just a phase. We’ve seen it all before, dozens of times, and it’s wearing thin. The episode is bolstered by the insane plot twist that Simon was the one conning Bart, and that he was fully aware that Bart may have been assassinated, but it wasn’t really enough to make an episode that worked.

Take Away: Don’t make weird agreements to switch places with your doppelganger. You’re always getting screwed over.

“Double, Double, Boy in Trouble” was written by Bill Odenkirk and directed by Michael Polcino, 2008.

Tagged as: 2008, Double Double Boy in Trouble, Lifetime of Simpsons, Season 20, the Simpsons