That Time the Avengers Were Beaten by Feminism

It sure is a wonderful thing when I come across an old Marvel comic and know immediately in my heart that it’s going to work out wonderfully for Marvel Madness. Occasionally I have to kind of seek stories out, especially if I’m trying to find a story that fits some sort of theme, like when I do ones that relate to holidays. But it’s a hell of a joy when I’m just reading through one of the several runs that I’m simultaneously reading and I find a story that I just know will work on here. And today’s story is just such a case. A random issue of the Avengers that serves as the introduction as one of my favorite characters, features some weird creator cameos, has a Halloween parade and the Masters of Evil, and also is a reminder that the female Avengers are more than capable, and able to best their male counterparts. Parts of this issue can come off as a little dated, especially in regards to its opinions on the tenants of feminism, but I like to see it as more positive than that, actually becoming a pretty solid example to the power of women, despite what the creators may have personally thought. So let’s check out that time that the Lady Liberators bested the Avengers.

The issue begins with Janet Pym, the Wasp, flitting through the night on her way to Avenger’s Mansion. She just seems to be popping in, with no particular goal in mind, until she hears the sounds of people talking in the meeting room and decides to stop in and see what’s going on. And she’s shocked to find that the people sitting around the table are the Scarlet Witch, the Black Widow, Medusa of the Inhumans, and the mysterious Valkyrie. Janet is more than a little confused why Wanda and three non-Avengers are at the table, and things just get more confusing when Wanda announces that it’s no longer Avengers’s Mansion, it’s the headquarters of the Liberators. This is raising some red flags  for Janet, but Widow and Scarlet Witch convince her to give Valkyrie a shot. Janet submits and returns to normal size, and lets Valkyrie explain her origin. She’s apparently a brilliant chemist, but who gets no respect or attention from her male peers. One night she was staying up, working on a new formula when some sort of accident occurred, and she was doused in a weird mixture that gave her superhuman abilities. She then vowed to become the Valkyrie, a warrior hellbent on defeating the patriarchy and setting up a matriarchy. And her plan to do that involves getting these Liberators to help her defeat the Avengers. The women in the room are a little wary about this, until Valkyrie starts pointing out how all of them are constantly belittled by their male teammates. Janet is always overshadowed by Hank Pym, Scarlet Witch is treated like a child by her brother Quicksilver, Medusa has to follow every order of Black Bolt, and Black Widow has constantly been refused entry in the Avengers for no reason. And this sales pitch works beautifully. The women decide that they need to show the male Avengers whose boss, and agree to join Valkyrie’s Liberators.

The Liberators then run off to the rooftop of Avenger’s Mansion to get onto Valkyrie’s mode of conveyance. She’s created a chariot dragged by flying horses, which she claims she’s bred. The other Liberators just kind of accept that, and they fly off to find the Avengers. And where are the Avengers? Why they’re in beautiful Rutland, Vermont to participate in an annual Halloween parade as the guests of honor! Vision, Black Panther, Quicksilver, and Clint Barton as Goliath arrive at the home of the mayor of Rutland, ready to stand on a float and entertain the people of Rutland. The Avengers mingle for a while at the party, getting to meet the author of this issue, Roy Thomas, and his wife Jeanie. Now, this is something that used to happen a lot in old Marvel comics, and I always find it hilarious. Sometime I’ll have to talk about the Fantastic Four story where Dr. Doom makes Stan Lee and Steve Ditko help him defeat the Four. Anyway, the party ends and the Avengers follow the rest of the costume-clad citizens of Rutland out to the Main Street where the parade is about to begin. Little do they know, things are about to pop off.

And not just from the Liberators, because there’s another faction visiting Rutland. The Masters of Evil. Well, that’s what they’re calling themselves at least, I usually need a Zemo in charge. But the folks we have today are Klaw, the Melter, Radioactive Man, and Whirlwind. They’re in Rutland because a local scientist has created a device that can enter parallel realities. And it just so happens that that scientist is also on a float, with the device that powers his machine. So the Masters of Evil lay in way, and once the Avenger’s float passes by they rush the scientist. This was a poor plan though, because as soon as the Master’s of Evil spring into action the Avengers notice, and get ready for a fight. Good luck Rutland, Virginia!

The Avengers and the Masters of Evil begin fighting at this point, and shockingly the Masters start doing well. The Melter is able to use his blasts to harm Vision, keeping him entombed in some melted cement, Klaw causes a building to collapse onto Black Panther, Quicksilver isn’t able to keep up with Whirlwind’s rapid movements, and the Radioactive Man blasts Goliath with everything he had, knocking him out. So things aren’t looking good for the Avengers. And they’re about to get worse, because the Liberators have arrived, and everyone but Valkyrie are ready and raring to start attacking their male oppressors. But when they see the Masters of Evil about to defeat the Avengers, they get pissed, because a team that’s not them is about to defeat the Avengers and take their glory. Wasp volunteers to go do some recon and figure out what’s going on, and Valkyrie calls her a wench, demanding that she go as fast as she can. Hmm, that’s kind of an odd thing for their feminist team leader to say…

Anyway, Wasp sees what’s going on and sends out the call for the Liberators to come help her save the Avengers. Wasp is able to blast Melter in the eyes, making him stop blasting Vision long enough for the android to get a hold of himself and escape the cement. Next up Black Widow starts fighting with Klaw, defeating him and letting Black Panter escape the fallen building. Medusa is up next, using her prehensile hair to snatch Whirlwind from behind, holding him down so he can’t escape. And Scarlet Witch finishes things off, using her hex powers to cause a tree to drop down on Radioactive Man, knocking him out. So the Liberators have saved the Avengers, and the men start thanking them, not realizing that things have just begun. The Liberators start telling the Avengers what’s going on, telling them that they’re sick of being treated like second-class citizens and are going to defeat and usurp them. The men are a little confused, not believing that their female friends and teammates would behave like this, when Valkyrie comes out of the shadows, ready to get violent. And she does.

Yeah, I’m not going to lie, I would wear a t-shirt with Valkyrie on it saying “Up against the wall male chauvinist pigs!” So, Valkyrie’s energy blast from her halberd was powerful enough, and shocking enough, to knock out the already weakened Avengers, scoring a win for the Liberators. But that doesn’t seem to be enough for Valkyrie, who then announces that the Liberators are going to head to the local university and get something that will help them. The Liberators are a little confused about this, but go along, heading to the university and meeting with that professor that the Masters of Evil wanted to attack. He shows them his device, which can open up portals to other realities, and something suddenly changes in Valkyrie. She admits that this was her ultimate goal, and she didn’t actually care about the Avengers. But why does she care so much about this device? Well, that’s because she’s not actually a new heroine named Valkyrie, she’s actually the Asgardian Enchantress, one of the Avenger’s oldest foes.

Yeah, Enchantress has pulled the wool over the Liberators eyes, and has manipulated them into helping her get rid of the Avengers and access this device. But why does she need it? Well, apparently after her and the Executioner’s latest shenanigans Odin banished the two of them from Asgard, and weakened her magic. The two wanders around magic realms for a while, until Executioner dumped her for Aphrodite when they found there way into Olympus. So now Enchantress hates men and wants this device to return to Asgard so she can strengthen her magic and use it to punish all men. And once she’s done monologuing she begins summoning up all of her remaining strength to destroy the Avengers and the Liberators with a powerful spell. However, Scarlet Witch saves the day by surrounding Valkyrie in a field of hex magic, causing Enchantress’ spell to ricochet back at her, and seemingly destroy her. Turns out Scarlet Witch realized there was something fishy about Valkyrie when she called Wasp a “wench” and had been waiting for a moment to reveal her true nature. so the Liberators have saved the day! And this of course leads Clint Barton to start being a total asshole, because up until ten years ago or so Clint Barton was the absolute worst.

This story is a whole lot of fun. I love these weird little one-shot stories from the older days of the Avengers, back before they required long-lasting multiple-issue arcs. Back when they could just go have a silly little adventure in Rutland, Vermont beating up the Masters of Evil. Plus we get to see the delightful introduction of Valkyrie, a character who I’ve really come to love over the years. True, this isn’t really the Valkyrie that I know and love, but it’s a start. Things get complicated with Valkyrie, what with the reveal that Enchantress had based this disguise off a real person who ends up getting returned to life in the Defenders, but it’s really hard to get a hang on all of that nonsense. What does matter is that Valkyrie is a badass hero who’s primary goal is to show the patriarchy that she’s just as capable as men. And that’s more or less what this whole issue is about. There are times where I kind of feel like Roy Thomas didn’t actually believe any of the feminist beliefs that the Liberators were spouting, and that he was making fun of the feminism movement more than anything, but I don’t really care what he intended, because what actually happened was an issue where some of the most competent and capable heroes in Marvel Comics got together and saved the day. They may have been manipulated by the Enchantress for her own purposes, but Black Widow, Wasp, Scarlet Witch, and Medusa still were able to defeat the Masters of Evil on their own, saving the day. More often than not the female heroes in these older Avengers books were just side-characters, there to be kidnapped or be talked down to by the male heroes, and regardless of author intention, this issue showed them taking the reigns and proving that they’re just as good as their male counterparts, if not better. And that’s something that I love to see.

Avengers #83 was written by Roy Thomas, penciled by John Buscema, inked by Tom Palmer, and lettered by Herb Cooper, 1970. 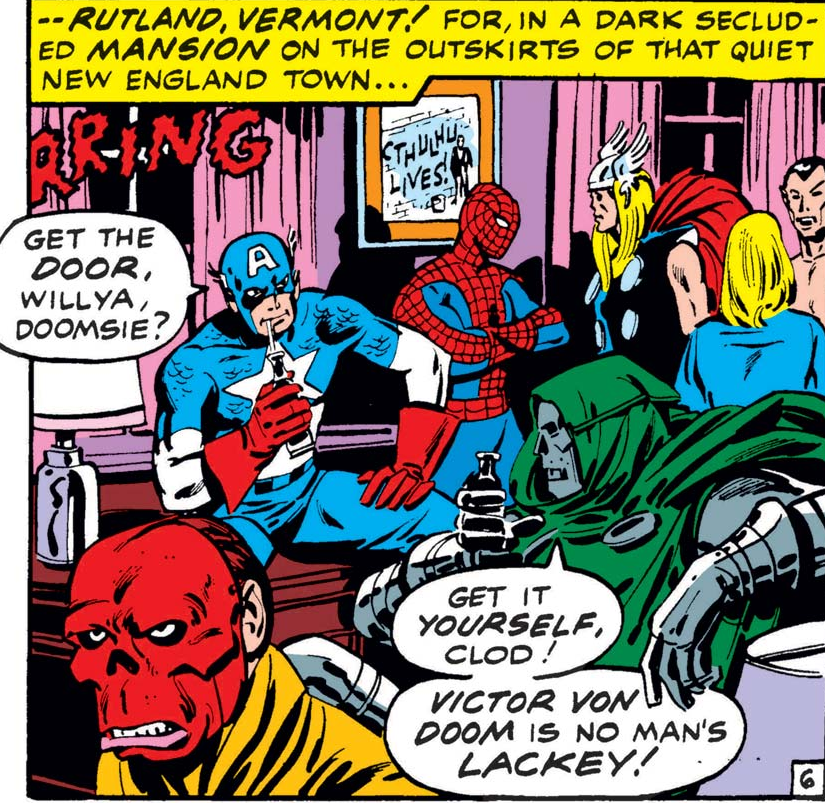