That Time the Defenders Saved Rutland, Vermont From Cultists

Now that we’re firmly in October, I think it’s time to start focusing on spooky things here on Puzzled Pagan Presents. I have several fun things to discuss this year, and I’m starting things off with a fun little Marvel story. And, as an added bonus, I’d like to let you know that I’ve found a new yearly tradition. You may remember that a couple months ago I tackled an issue of the Avengers where the team was manipulated by the Valkyrie into going to the town or Rutland, Vermont where they saved the day while participating in a weird Halloween parade that featured several writers at Marvel. And, if you haven’t here’s a link.  And, as shocking as it seems, it turns out that that wasn’t the only time that the mighty heroes of the Marvel universe have found their way into Rutland, Vermont on Halloween. Apparently there was a mayor of Rutland who was a huge fan of Marvel, and who held a Halloween parade each year. Several writers at Marvel loved the parade, and decided to slip it into their books each year. So, yes, today’s little romp featuring the Defenders is the second trip to Rutland, Vermont. But it’s not the last. And things get crazier from here on out. But, that’s getting ahead of myself. For now let’s just focus on the fact that Doctor Strange, Namor, and the Hulk once fought a bunch of Lovecraftian cultists who tried to destroy the world.

The story begins, of course, it Rutland, Vermont the night before Halloween. The people of Rutland are all preparing for the next days festivities, while not noticing some strange red glowing light emanating from the top of a nearby mountain that the locals refer to as Bald Mountain. We take a peak up atop that mountain, and find a group of cultists cavorting about and preparing for a ritual. And, as the appointed time arrives, a portal begins to form at the top of the mountain, and the leader of the cult approaches it to get word from the being on the other side of the portal. The Dread Dormammu! Now, I’m kind of shocked about this, but I haven’t talked about Dormammu yet on this website. Which is a little insane, because Dormammu is one of those character who seems designed to be featured in articles like these. He’s an apparently omnipotent being who lives in a Dark Dimension, he has a flaming head, and his whole goal in life is to conquer all dimensions and realities. But there’s one that’s always giving him issues. Ours. Or, Earth 616 I suppose, whatever. No matter what Dormammu does he can never reach Earth, and because of a gentleman’s agreement with Doctor Strange, he promised never to step foot on Earth. Except when he tries to get around that agreement. Like this time. 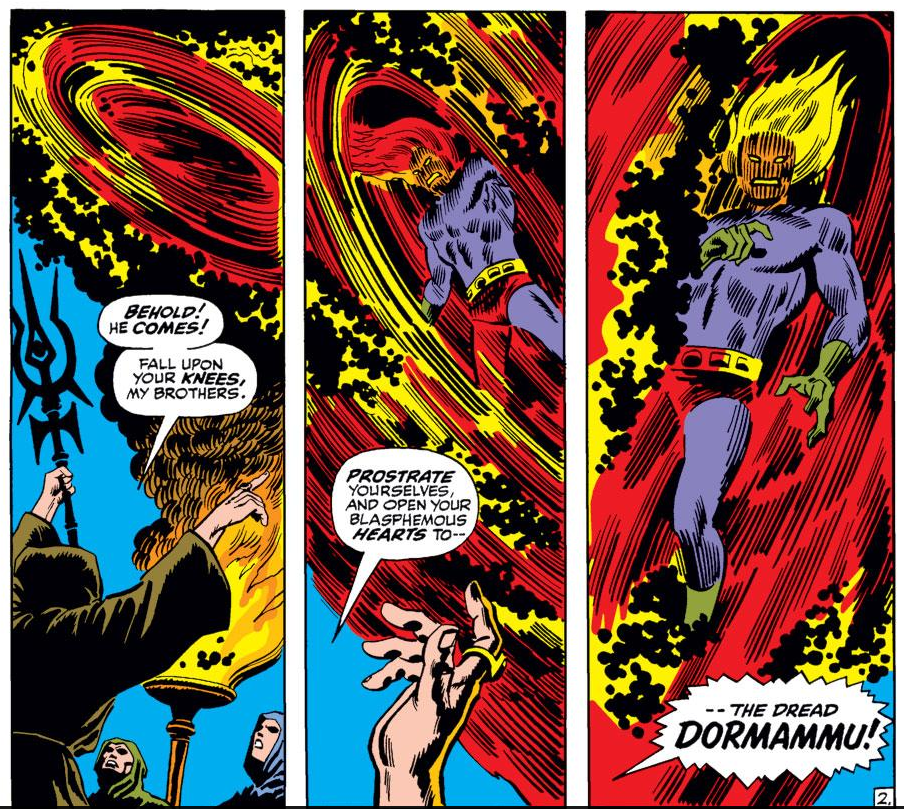 However, this isn’t Dormammu’s entry to Earth. This is basically just a phonecall. And Dormammu is not pleased with being bothered. He yells at the cult members for a bit, reminding them that the plan can only begin on All Hallows Eve, and they’re a day early. They kind of prostrate themselves, and tell him that they were just double checking on the plan, which involves a sacrifice. He needs a human body to possess, creating a bit of a loophole with the whole “setting foot on Earth” thing. But the cultists insist that they have everything under control, and promise Dormammu that they’re well on their way to kidnapping the perfect sacrificial lamb. Dormammu then mocks the help, and hangs up.

And, who is this perfect sacrifice? Doctor Strange. Duh. We cut over to Greenwich Village where Doctor Strange is sitting in his Sanctum Sanctorum, using the Eye of Agamotto to probe the fabric of reality to see why he’s been so on edge lately. And, as he gazes into the Eye, he’s presented with a vision of Dormammu, planning his incursion. Doctor Strange is obviously concerned about this, even though he knows that Dormammu is bound to never enter Earth. But, to be on the safe side, and because this is the second comic ever featuring the Defenders, Doctor Strange starts to make a contingency plan, and uses the Orb to keep tabs on Namor and the Hulk in case he needs to call them up. But as Doctor Strange is thinking about his new teammates, something odd happens. An astral form of his teacher, the Ancient One appears, and asks Doctor Strange to come hang out with him in the sky. This is apparently not an odd request, so Doctor Strange lets his astral form slip out of his body, and heads up to talk to the Ancient One. Which is when the trap is sprung.

But fortune continues to shine on Doctor Strange, because it turns out that right before Wong came in to fight the cultists, he was calling Doctor Strange’s disciple/girlfriend Clea. And when she heard Wong getting in a fight, and losing, she obviously became worried, and runs over to aid him. She wakes Wong up, and when she learns what has happened she knows she needs to do something. So, mustering all of her powers, Clea is able to sent a mental transmission around the world, causing both Namor and the Hulk to see visions of Doctor Strange, while also getting an all-encompassing urge to come to New York and aid the Doctor.

Oh, and if you’re worried that this is too many plates to keep spinning, how about I toss another one one? Because we now cut back to Rutland, Vermont, where Mayor Tom Fagan is hard at work getting the annual Halloween parade in order, when he gets a surprise visit from Roy Thomas and his wife Jeanie. You know, Roy Thomas? The guy writing this issue? Yep, comics are weird. Well, Roy, Jeanie, and Tom get chatting for a while, and Tom begins to tell them all about Bald Mountain, which has a whole history of spooky occurrences. Which gives us some exposition and seems to make Roy and Jeanie consider just leaving. 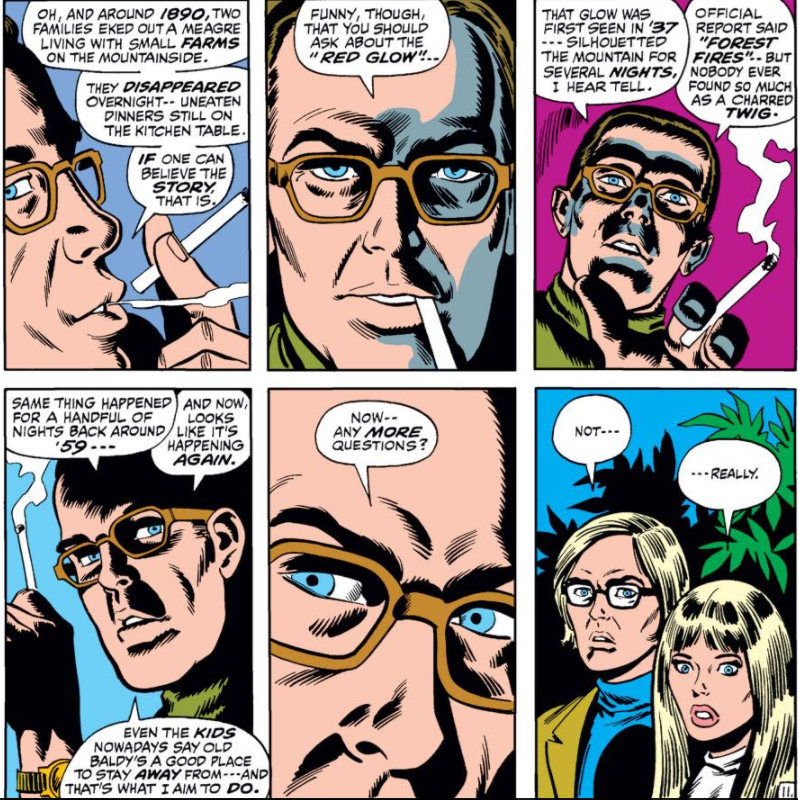 Anyway, after that we check back in on Namor and the Hulk as they both struggle to enter New York to answer the call of Clea. Which is pretty difficult, since the Hulk is one of the most hated beings in the country, and Namor is a flying man in a Speedo. And it’s that sketchy attire that draws the attention of an old lady, who ends up calling he cops on Namor. He flees through the city, trying to avoid the police while the Hulk is just strutting around breaking stuff and scaring off the police. But, eventually we see Namor and the Hulk run into each other, and since they’re pals fresh off a team-up from the previous issue of Marvel Feature they happily reunite. Clea and Wong then pop from the shadows, and tell them what’s going on. Why they didn’t all just meet in Rutland, I don’t know. But it does mean that Namor has to wear human clothes and the Hulk has to pop tranquilizers like Tic Tacs in order to stay as Bruce Banner while they ride a bus to Vermont. Which is absurd.

Meanwhile, the cultists have driven the unconscious body of Doctor Strange all the way to Vermont in a smelly old station wagon, and they prepare for the sacrifice. They get him into a cabin and begin talking to each other and explaining their plan. Basically, they tricked Doctor Strange to have his Astral form leave his body so they could steal the body, and let Dormammu possess it. Dormammu will then void that whole gentleman’s agreement that he has with Doctor Strange. At which point he’ll be alone in this world without a Sorcerer Supreme to protect it, and he’ll become the lord and master of our realm. Typical Dormammu stuff. 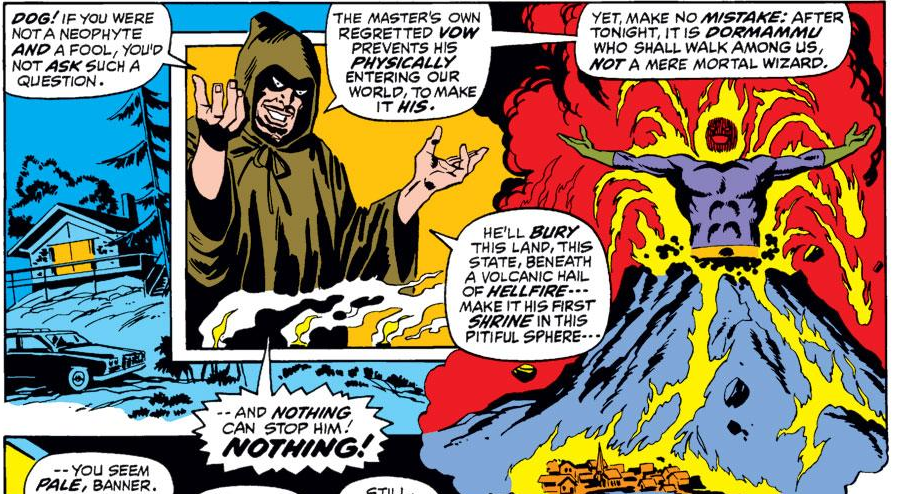 And the only people who can stop Dormammu are currently sitting in a Greyhound bus leisurely heading toward Rutland! The bus finally arrives in Rutland, as the Halloween parade is occurring. Which is also near dawn? That’s a serious parade. But the Defenders don’t care about the parade, and all the strangers dressed as their close personal friends, because they have to hightail it up to the top of Bald Mountain, which has begun to glow an unearthly red. They quickly scramble up the mountain, and know they’re in the right place when cultists begin hopping out of trees to attack them. Namor just start punching them off the mountain, while Bruce Banner gets worked up enough to turn into the Hulk.

The cultists momentarily get the upper hand on Namor, since he’s been out of water for so long that his powers are starting to fade, but the Hulk is able to throw a boulder at a random part of the mountain which causes a natural spring to occur, saving Namor. And while all the punching is going on Clea and Wong approach the group of cultists who are preparing Doctor Strange for the sacrifice. And, as Strange’s body starts to life up into the air and float towards Dormammu’s portal Clea makes a realization. Doctor Strange placed his Astral form in Wong for safe keeping when the cultists took his body. So Clea casts Strange’s soul out of Wong, where it’s able to float up and reenter Strange’s body. And, because there’s already a soul in the body, Dormammu can’t use Strange’s body to enter Earth. Dormammu obviously isn’t pleased, and the two begin to duel, causing enough magical energy to shake Bald Mountain and terrify the citizens of Rutland below. But eventually Dormammu realizes that this is a failed mission, and heads back into the Dark Dimension, letting the Defenders save the day! After pulling themselves out of the rubble they caused.

This is certainly not the craziest Marvel comic I’ve ever featured on this site, but there’s just something about it that makes me happy. The whole idea of this Rutland, Vermont thing, and the fact that it kept happening for years is just so strange, and I’m fascinated by it. There’ll be stories like this for years to come around Halloween, and I really find the idea hilarious. A bunch of Marvel writers were personal friends with a mayor of a random town that had a costume parade, and they kept writing themselves into stories that took place in this town. And, the weirdest part? Most of these stories didn’t happen anywhere near Halloween! Most of them seemed to be released in like, April. I can’t even begin to understand how this flew for so many years.

And aside from that, it’s just kind of a silly issue. I’ve talked about the Defenders before on the site, but I really do enjoy the team. They’re just such a weird assortment of B or C level Marvel heroes, all fighting magical and mystical threats, which kind of inherently lend themselves to silly storytelling. Really, the only complain that I would have about this issue is that it has such a Lovecraftian aesthetic, what with the cultists and the inter-dimensional being trying to possess someone in New England, it felt weird that they chose Dormammu as the villain. And, yes, I did look it up and it turns out that Shuma-Gorath, Marvel’s Cthulu rip-off, didn’t show up for another year. But you’d think that if you were already telling a story this Lovecraftian they would have created Shuma-Gortah for this tale. But oh well, we still got a fun little story, and that’s all that matters.

Marvel Feature #5 was written by Roy Thomas, penciled by Ross Andru, inked by Sal Buscema, and lettered by Sam Rosen, 1971. 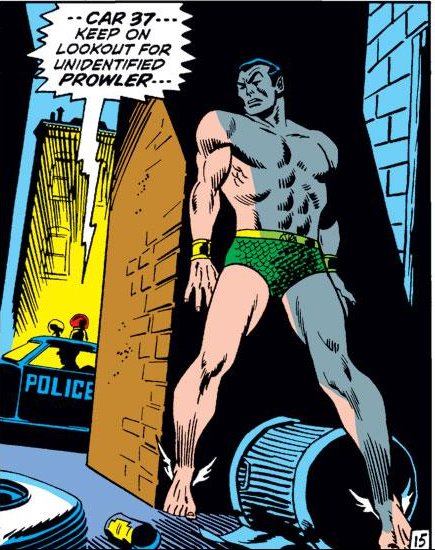