Oh boy. Oh you guys. You know what’s not a great way to start off a week? Bumming me out by giving me the knowledge that there was a third episode with Mona Simpson. I had no idea this episode existed, and folks, I was not happy. Every time they’ve brought Mona back it’s been diminishing returns after the perfect “Mother Simpson” episode. So seeing her yet again was not great. And they somehow found a way to make it worse. Buckle up.

The episode starts off by establishing that the Simpsons are going to the mall by having a quick gag where Moe just stands around next to his car, purposefully disappointing people who think they can take his spot. After that we see the family head into the mall, but only to do boring things like shop for sweaters. But Marge allows them to do one thing that they’ll actually enjoy, and for some reason Maggie gets to pick where they go.

So they obviously head to the Stuff-N-Hug, some Build a Bear place, and head inside to buy extremely over-priced stuffed animals. Which means we’re going to get a lot of gags. We see Ralph fill his bear up with so much fluff that it explodes, Lisa deals with a sexist employee who won’t let her dolphin be a doctor until she lies and says it’s a boy, and Bart finds a hippo where you can record you voice. Bart then makes all of the hippos start insulting Homer, until he freaks out and starts attacking and destroying the hippos, causing them to flee the store.

The family head home, and find that things are about to get bad, because their door is ajar. The family becomes convinced that there’s a criminal in the house, so Homer grabs a cinder-block attacked to a chain, and begins swinging it around in preparation. He slips into the house, ready to smash a prowler’s head to dust, and finds someone inside the kitchen. But it’s isn’t a burglar, it’s his mother Mona, who as far as Homer knew, died in a bus crash a couple seasons back.

Homer is obviously shocked by this revelation, so he and Mona get some apple pie and sit on the couch letting her fill us in on her newest series of improbably events. She just blows over the fact that she survived the bus crash, since we knew how but Homer didn’t, and just tells him that after he last death she finally has the government off her back, and she’s finally free to be his mother. But, in a shocking change from Homer’s usual behavior, he doesn’t get excited. In fact, he gets irritated, because so far his experience with Mona is that she gets his hopes up and then leaves again.

Mona is pretty surprised that Homer is taking this stance, but does admit that it’s not unjustified. But she’s not going to stop trying to get Homer to forgive her. She keeps trying, while bonding with the rest of the family some more, mainly just telling them how Homer has always dealt with emotional pain by eating. But Homer keeps refusing to forgive her, and keeps hiding in his bedroom to avoid her. No matter what she does, he just won’t forgive her, and he says that to her face.

However, that night Homer finds he can’t fall asleep. He’s racked with guilt and has stressful dreams all night. And after a while he gives up and realizes that the only way to get through this is to forgive Mona and try to move on. So he heads down to the living room and finds Mona resting in a chair. Well, by resting I mean she’s dead. Yep! They brought Mona back for a third time and then killed her without having any closure with Homer. Happy Monday!

We then cut immediately to some sort of funeral service for Mona, which mainly just consists of Homer, Grandpa, Seth, and Munchie sitting around being sad and holding her urn. So Homer heads home and becomes incredibly despondent, just laying around and staring at his mother’s urn. The rest of the family try to cheer Homer up, but it’s no use. He’s too depressed, and fixated on death, and just seems unable to get over this hit.

Homer then begins wandering around town asking people their opinions about death and the afterlife. None of the barfies are particularly helpful, Apu teaches him about reincarnation, and Ned just rants about heaven and punishment. However, when Homer gets home he finds something shocking. Marge has been going through Mona’s stuff, and found a DVD that Mona left behind, which turns out to be a video will.

So the family sit around and they put on the will, looking to see what’s being left to them. Bart gets a Swiss army knife, Lisa gets her rebellious spirit, Marge gets a hemp purse, and Homer gets the burden of releasing her ashes at the top of Springfield Monument at a specific day and time. Homer decides that accomplishing this final goal for his mother will help him move on, and the family head out to Springfield Monument Park to accomplish her wishes. 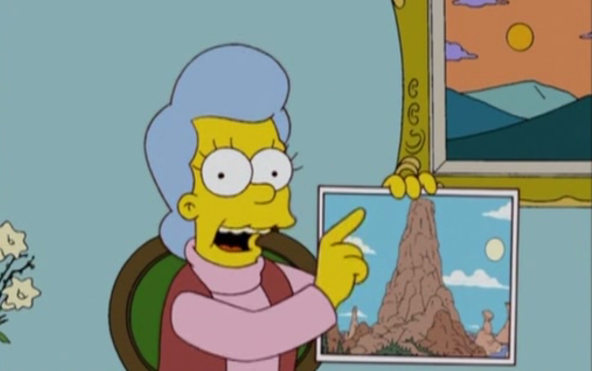 The family begin hiking up the butte to release the ashes. Bart bails first, then Lisa, and after she’s forced to carry Homer up most of the butte with no thanks Marge finally bails too. So it’s just Homer, and he reaches the summit of the butte, just in time to release the ashes as the specified time that Mona gave him. But when he lets the ashes go, something odd happens. The winds blow the ashes, and they go down inside the butte, which has been hollowed out and contains some sort of missile launch site.

The ashes fly down into the silo, and end up getting sucked into some important equipment, shutting down the silo. Yeah, Mona’s final wish and message to her son was to help her do some posthumous hippie sabotage. And Homer is pissed. Justifiably. And to make matters worse the guards in the silo are able to track down the source of the ashes, and find Homer. They shoot at him, and he falls down into the silo, where he’s promptly taken captive.

And things are about to get really crazy. Because it turns out that this missile silo is ran by Mr. Burns, who is planning on firing that rocket full of nuclear waste into the rainforest, seemingly just to be evil. And they’ve managed to fix the machine the ashes broke, so they’re still going to fire the missile, making Homer fail his mother’s last crazy wish. But the episode hasn’t gotten crazy enough yet, so things get wackier.

Bart somehow finds the cell that Homer is being held in, and tosses down the Swiss army knife that Mona gave him, letting Homer cut out of the ropes that bind him. Next, Marge decides to light her hemp purse on fire to get the guards high. Lisa also uses a pair of crystal earring she stole to light the bag. Homer is then able to find a cinder-block and a chain and uses it to beat up the guards and destroy the missile command controls. This also sets off the self-destruct feature of the base, and Homer barely escapes before the butte explodes. He also has Mona’s ashes, and releases them for real this time, and we get a montage of moments from previous Mona episodes.

Holy shit. Who thought this episode was a good idea? Like, I don’t think I could come up with a less palatable episode of this show. “Mother Simpson” is an amazing episode, and its ending is one of the most poignant and beautiful moments the show ever accomplished. Then they brought her back for a lackluster and goofy episode a couple seasons back. That was a bad call, but whatever. This is different. Having Mona come back and die could technically be used to dramatic effect, but it wasn’t here. I feel like the idea of Homer not forgiving Mona, and being an ass is justifiable. I also think him then feeling guilt when she dies and trying to find some meaning to life afterward makes sense. But then there’s the ending. It becomes this weird James Bond pastiche, seemingly just to drag Mr. Burns back into the ongoing Mona narrative, and everything gets terrible. Mona seriously made her will some elaborate scheme to have her family screw over Mr. Burns? That’s so incredibly selfish, and not at all what I would expect from Mona Simpson. Mona loved her family. That’s why she left, so that they wouldn’t get dragged down by her mistakes. But this episode has Mona attempt to get her family caught committing crimes. This episode’s Mona loves her cause more than her family. And that really bugs me. It’s just such a bummer, and ruins any emotion that this episode should have. I’m staggered trying to comprehend the fact that an episode that had Homer’s mother die in the second act ended with Homer jumping out of an exploding missile silo while wearing a Union Jack parachute. The cognitive dissonance involved in those facts are ridiculous. And then the episode tries to milk some emotion by showing clips from better episodes. Screw this episode. We may have a new winner for worst episode of the show, because I’m seriously shaking I’m so mad at how misguided and horrible this episode is.

Take Away: Don’t watch this episode.

“Mona Leaves-a” was written by Joel H Cohen and directed by Mike B Anderson & Ralph Sosa, 2008. 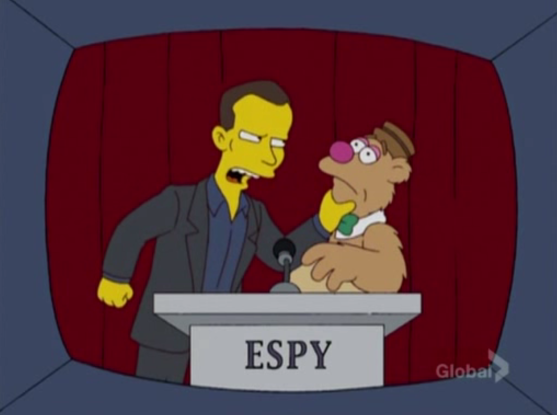 Tagged as: 2008, Lifetime of Simpsons, Mona Leavesa, Season 19, the Simpsons