Hey everybody. You ready for a really weird episode? I’ve heard about this episode before, and a good friend of mine actually has spoken quite highly of it. And while I’m not sure that I would say I like this episode, it’s certainly interesting. I’ve been on record for loving flash-back episodes, and we really haven’t been getting many lately, so let’s check out a flash-back episode that also tries to explain away the sliding timeline of the Simpsons.

The episode begins with Springfield enjoying Christmastime. Well, everyone except the Simpsons. They aren’t doing well, because Homer apparently hasn’t paid the heat bill, causing the family to sit around the fireplace, desperately trying to stay warm. They’re just tossing random objects into the fire to keep it stoked while Homer complains about the fact that he expected Global Warming to take care of the cold by now.

However a story starts when Bart finds a box of memories and gets ready to toss it into the flames. Marge stops him, explaining that it has precious memories inside. Lisa pops it open, and is shocked to find that one of the items is a college diploma for Marge. Lisa then does the math and realizes that if Homer is almost 40 it doesn’t make sense that Bart is 10, since they always said that they had Bart as soon as the graduated from high school. Which is a solid point. And here’s that explanation.

Turns out that after high school Homer and Marge decided to move in together, and since that time period is now the early 90s instead of the late 70’s, they move into an apartment similar to Melrose Place with all sorts of other younger versions of townsfolk. And their lives are kind of weird. Marge seems really bored and lonely, and Homer is busy trying to get his R&B group with Lenny, Carl, and Lou the cop off the ground.

But that life is thrown into turmoil when Marge gets accepted to Springfield University. The only problem is the fact that she doesn’t have enough money for the tuition. So Homer decides to get a job and pay for Marge’s tuition. This results in him going to get a job from Abe, who apparently ran a very successful laser tag arena. Homer then begins working at the place, getting zapped by children all day, while Marge starts going to class. 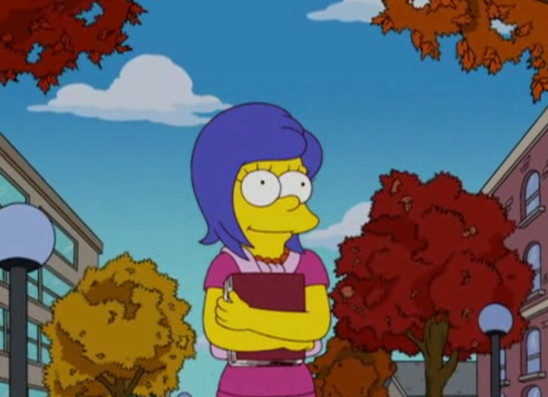 And she loves it. Basically everything about Springfield University is up Marge’s alley, and she especially loves her new history class. It’s taught by a young and pretentious man called Professor August, who basically just tells them that all of history is wrong, and that the man is out to get them. But since Marge is a college freshman, she eats it up and starts becoming obsessed with Professor August, telling Homer all about how brilliant he is.

And this is a problem. Homer starts to get worried at how much attention Marge is giving Professor August, and Marge is starting to resent Homer because of all the angry counterculture that August is teaching her. The two start to drift apart, not quite sure how their lives work together anymore. And it all comes to a head when Homer heads onto campus to find Marge, and ends up finding her in August’s office, being told how useless and terrible Homer is. Homer starts getting mad and ends up making an ass of himself, just pushing Marge further away.

So Homer storms out of the campus and heads to a band practice. But he’s not in the mood for R&B anymore, and convinces the guys to do something new and different to reflect his misery. And since it’s the 90s that means they start wearing flannel and switch to playing grunge. They even change their name to Sadgasm. And it turns out that they’re actually pretty great at grunge, and quickly start playing gigs, even on the campus. Which does result in a hilarious Back to the Future gag with Marvin Cobain calling his cousin.

However, it also convinces Marge to leave Homer and start dating Professor August, which is super creepy. We then see Marge leave the apartment and start living with August while Homer goes to drink his cares away, and ends up just smoking cigars with Moe, since he changed his bar into a cigar bar. But apparently the sadder Homer is the more successful Sadgasm is. They begin playing gigs all around the country, even playing in Seattle.

Meanwhile, things aren’t going so well for Marge. She assumed that dating a pretentious professor would be enlightening, but instead it turns out he just complains about everything and is constantly trying to prove that he’s smarter than her. And this reaches a fever pitch when the two are walking on a beach and stumble across a wedding. Marge mentions that it’s beautiful, and August goes on a rant about how marriage is dumb, and Marge is dumb for liking them. And this is the last straw for Marge, who gives up on August.
And luckily for Marge, she knows exactly where Homer is. Because Sadgasm has apparently moved into a big mansion together, and Homer has basically become a shut-in. Marge then sees a Sadgasm music video that’s clearly about how much Homer still loves and misses her, so she heads to the mansion, and finds Homer in a terrible state, seemingly strung out. So Marge gets back together with him, and starts trying to clean him up.

Unfortunately Homer wasn’t addicted to heroin, he was trying to take insulin, so that just caused more problems. But they get Homer to a hospital and he’s then right as rain. And once that’s fixed I guess they break up the band, and Homer and Marge to have sex on the putt-putt golf course to celebrate. Thus creating Bart and I guess filling in the missing hole in the timeline. And I guess the story helped them deal with the cold, they don’t really address that again.

So yeah, I’m not sure exactly how I feel about this episode. However, I’m kind of conflicted about that, because I think the reason that I’m feeling odd about this episode is because some obsessive part of my brain doesn’t like that they messed with the timeline. This episode changes Homer and Marge’s story, thus making episodes like “The Way They Was” not make sense anymore. They didn’t go to highschool in the 70s anymore, and that bugs me. However, that kind of gets into what they were trying to say with “The Principal and the Pauper,” that it doesn’t matter if they screw with characters or timelines, because they’re just fictional people. We aren’t supposed to be bothered by this, because if this bothers us it’s a slippery slope to being bothered by the fact that this is the 19th season and Maggie is still a goddamn baby. But I’ve written more than 400 of these damned articles, so clearly I’m too obsessed, and stuff like this bothers me. It was a fun episode with a lot of gags, and I feel like if I could stop myself from being bothered by what it did to the timeline I would have a lot of fun with that. But I can’t turn that part of my brain off, so instead I just get bothered by it.

“That ’90s Show” was written by Matt Selman and directed by Mark Kirkland, 2008.