The last couple of seasons I’ve been more or less disappointed by the triptych episodes, Treehouse of Horror notwithstanding. They’ve tended to be pretty lazy, and just generally huge misfires, often coming up with ridiculous stories that barely fit the theme of the episode. That or they pick themes like “Stories on Boats” that don’t seem overly rife with narrative potential. But remember we’re also in the middle of a week of episodes that are shockingly decent, so what do we think is going to happen with this one?

The episode starts off with Homer and Marge bringing the kids to a carnival, specifically so that the kids will leave them alone for the next two hours and they can be romantic. They then immediately head to a tunnel of love, a frequent feature of fictitious carnivals that I have never actually seen in real life, and they begin floating around. Bart and Lisa get bored much faster than Homer and Marge anticipated though, and Bart grabs an industrial sized drum of Jello mix, and dumps it into the Tunnel of Love water, causing it to solidify and trap Homer and Marge. The carnies don’t seem eager to help them, so they’ll be stuck for quite some time, and they decide to tell stories about love until they get rescued. 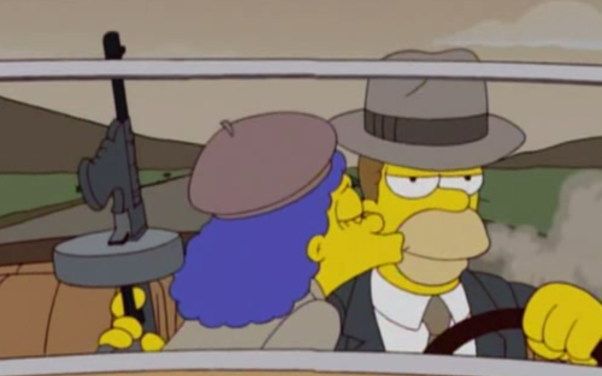 Our first segment is a parody of the classic Bonnie and Clyde film, with Homer as Clyde and Marge as Bonnie. It starts with Homer finding the bored Marge on a farm in the middle of the Great Depression, and tries to woo her by saying he’s a bank robber. Turns out Marge is super into that, and after Homer robs a general store the two race off to start a life of crime. Homer quickly realizes that Marge is sexually attracted to violence, so he just starts being as violent as possible, and thus their crime spree starts.

And they decide that they need a driver, so they kidnap Ned and make him their unwilling accomplice. With Ned’s help they continue to drive around the South, becoming folk heroes to the poor victims of the Depression. But everything falls apart when Ned is in a movie theater one day and sees a news reel about Bonnie and Clyde, and how everyone all the way up to President Roosevelt is calling for their capture. He then realizes the full extent of their crimes, and goes to local Sherriff Wiggum and tells them he wants to help them catch the duo. So the next day Ned drives to two out to the middle of nowhere, where Wiggum and his posse spring out of the woods and spray bullets at Bonnie and Clyde, ending their affair, crime spree, and lives. Romance!

Shady and the Vamp

Marge was less than thrilled with Homer’s violent story, so she decides to tell her own, and makes it kid friendly. Her segment is basically based on Lady and the Tramp, and has Marge being a little blue dog from a respectable family, and Homer as a mangy mutt named Shady who lives on the street with Moe. Homer gets a crush on Marge, and decides to try hitting on her, only to get whacked by the children from her house. But this endears Marge to Homer, and she decides to take pity on him and go on a date. They obviously head to Luigi’s and get some wine and spaghetti and have a lovely time until the health inspector shows up and they have to flee. They then head up to a romantic scenic overlook, and presumably have lots of dog sex.

Which was a bad call, because they wake up the next morning and the Marge dog is instantly pregnant and having morning sickness. And this is evidence to Homer that he needs to split. So Marge returns to her house, and has to deal with being pregnant. This then leads to an actually pretty great song where Marge is singing to Patty and Selma cats, and Homer is singing to Moe. Marge wishes Homer would return, and Homer is feeling guilty about ditching Marge. But he doesn’t actually do anything, and Marge ends up having a litter of babies alone. Two of the babies, who look like Bart and Lisa, eventually decide to track down their father, and head out to Skid Row. And they do not succeed, because they’re captured by Dog Catcher Willie. Homer saw them getting captured though, and follows them to the pound where he mauls Willie and frees his children. They then return to Marge’s house, and Homer becomes part of the family, while also learning about his twenty other children.

So Marge was satisfied with that story, but Bart sure wasn’t. So he decides to tell the last story, which is a retelling of the romance of Sid Vicious and Nancy Spungen where Nelson is Sid and Lisa is Nancy. It begins with Lisa as a tourist to London, coming across a punk club and being oddly interested. She enters the club and finds the Sex Pistols playing, where Bart is Johnny Rotten, Jimbo as Glen Matlock, and Dolph as Paul Cook. And Lisa instantly takes interest in Nelson. So much so that she decides to do whatever she needs to do to hang out with him, which involves her buying some “Chocolate.” Hey, they’re kids, let’s go with chocolate.

Lisa finds the band in a bar after the show and she comes along with some chocolate for Nelson. He’s impressed at her initiative, and the two start to eat the chocolate, getting a sugar rush. They have a great time together and end up living together, just getting messed up on sugar all the time. And the rest of the band hates it. They can’t stand how unreliable Nelson has become now that he’s a candy junkie, and they try to get him to leave Lisa. But she’s become very vocal in the band, and starts some infighting. And this isn’t helped when Nelson shows up late to a gig and almost ruins it, which is enough for the rest of the band to kick him out. But it’s okay, because Lisa has a plan for the two of them to become a preppy bubble-gun pop duo. Which causes them to get kicked out of CBGB’s, and banished from punk. The episode then ends and I guess the family got out of the tunnel of love.

I actually enjoyed this episode quite a bit. The topic of “love” was certainly more able to deliver good stories, especially when they made the goofy decision to do nothing but movie parodies. The whole tunnel of love thing is a little odd, what with the fact that they could have easily just gotten up and walked out instead of sitting there telling stories, but whatever, the frame stories don’t matter all that much. What matters is if the stories are solid, and they really were. The Bonnie and Clyde retelling was a whole lot of fun, and it was a pretty decent little condensing of the story. Plus we got that great sepia-toned animation. Shockingly I think the Lady and the Tramp segment may have been the best, what with the change in animation and surprisingly decent song that they sang. They kind of went all out on this one. The third stories are often the weakest, just filling out the runtime of the episode, but I actually quite liked the Sex Pistols story, especially the weird decision to make them all kids who were addicted to “chocolate.” All around it was a really fun episode and kind of gives me hope that they may have figured out the issues with the triptych episodes.