Hey everybody, we’ve made it through another Season! Woo! Sixteen down! That means we have 12 more to go, but let’s try to focus on the positive side. Things are trucking along, and we get to finish off the season with a really weird episode about religion, which is typically a pretty big red flag for me. But let’s see how this one pans out!

The episode begins with Edna telling the children that the whole school is getting ready to participate in a massive Medieval Festival that they all have to take part in. She says that Martin will be the King, Lisa will be the queen, and Bart gets to be some sort of barrel-maker and wine-dispenser. Bart is obviously not into this role, but he begins working on transforming the gym into a castle just like everyone else.

But there’s someone who hates their job more than Bart. Because Skinner has decided that Willie is going to be the village idiot, and they make him wear urine-soaked rags and get his face covered in rubber cement like the has the plague. They even allow the children to stick Willie in a cage and pelt him with tomatoes and staplers. So while the children begin goofing off and taking advantage of their positions, Willie begins to plot his revenge.

And that revenge is to take the giant pie that the kids are going to eat at the end of the meal, and fill it with rats. Which seems a little extreme, but Willie is on record for being a bit of a sociopath, so I guess it’s all good. And his plan is a smashing success. The rats come pouring out of the pie and the children flip out, stampeding out of the gym to escape them. And while Skinner is storming around trying to figure out what has happened, he just happens to pass Bart, who is gloating, and decides that Bart was the culprit.

Bart obviously explains that he actually had nothing to do with this prank, but Skinner doesn’t buy it, and goes so far as to expel Bart. I’m not sure that this prank, which he was innocent of, was enough to warrant an expulsion, but whatever, we have a plot to get to, best not to focus on explanations. So, Bart’s expelled, and the family are furious. But they quickly move past that fury, and the fact that it was wrongful expulsion, and start focusing on finding Bart a new school. And, pretty quickly, they decide that Catholic school is the perfect solution.

So Bart gets enrolled in St. Jerome’s Catholic School, and head in for his first day. He gets a uniform and is put in a new classroom, and almost immediately earns the ire of the surely nun who teaches the class. She punishes Bart’s sass by sending him out to the hallway where he has to hold dictionaries with his arms spread out. And while he’s standing there, he ends up meeting one of the priests who run the school, Father Sean, and the two get to talking. 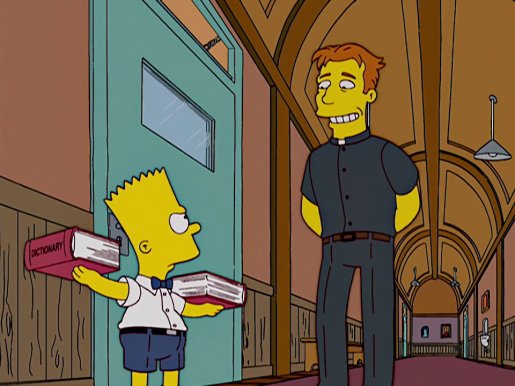 Father Sean seems like a good guy, and talks with Bart about how he became a preacher. Which mainly came about after a drunken Irish brawl with his father. But Sean is nice, and even gives Bart a comic books about saints which is super gory and up Bart’s alley. And just like that, Bart becomes a bit of a convert. He’s suddenly into Catholicism’s take on Christianity, and begins talking about it to his parents like crazy.

And Marge is not a fan. She suddenly becomes terrified that Bart is now the wrong type of Christian, because he has beliefs that are slightly different than her own, and she sends Homer to the school to get Bart taken out of it before it warps him. Unfortunately when Homer gets to the school it happens to be a pancake dinner/bingo night, and that quickly interest Homer. He spends the night at the church, hanging out with Father Sean and becoming enamored with the Catholic faith.

Especially when Father Sean explains the concept of absolution to him. So Homer makes Sean listen to all of his confessions, assuming that that will clear his slate. But when Sean tells him that it only works if he’s Catholic, Homer decides it’s time to convert. Which, if you’ll recall, is exactly the opposite of what he was supposed to do that night, so Marge is not pleased. But Bart and Homer ignore her, and just keep going to the Catholic Church, getting ready to convert.

This, for some reason, becomes a topic of gossip at their regular church, and Marge starts to get really embarrassed. She talks with the Church Spiritual Council, which is just Ned and Reverend Lovejoy, and they meet to come up with a battle plan. They don’t want to lose Homer and Bart, so they tell Marge that she needs to do something to win them back. And after a brief day dream about her going to boring Protestant Heaven while Homer and Bart go to fun-filled Catholic Heaven, she agrees.

So Marge heads out, eager to stop Bart from having his first communion, and decides that the best way to make Protestant Christianity seem cool is to take him to a church fair. Which looks like the lamest thing in the world. It’s dreadful, and Marge just keeps trying to cram it down Bart’s throat. Which does lead to Bart great point of saying that Marge is always telling him to be more interested in faith, but now that he is, it’s apparently the wrong one. But Marge ignores that.

Meanwhile, Homer and Father Sean are trying to figure out where Marge took Bart, and when they learn about the terrible fair they assume that that’s the right place. They head over, right as Bart is actually having a good time while playing paint-ball, and try to win him back to the Catholic side. This obviously leads to a paint-ball Mexican-Standoff between Homer, Sean, Ned, and Lovejoy. But it’s all deescalated when Bart explains that it’s ridiculous anyone cares about this issue, since it’s all Christianity and barely has any differences. This makes sense to everyone, and they decide to stop caring about Bart, making him a prophet. Which we see by checking in one the distant future where humanity is about to be destroyed in a war between people who think Bart preached compassion and people who think Bart preached Understanding.

This episode isn’t bad. It has a lot of interesting ideas, and while I don’t find it particularly funny, it’s fine for this time period. I’m quite on the record as not being a fan of organized religion, or episodes that look at it in too favorable of a light, and while this episode certainly falls into that camp, there’s at least some interesting ideas thrown about. We get an obnoxious Marge who doesn’t want anyone to think in a different way than her, which always bums me out, but there’s more interesting theological stuff going on. Technically my family is Catholic, but I’ve only ever been to one service that wasn’t a wedding or a funeral, and all it was about was how the church wanted more money. So I don’t know much about the faith. But everything I’ve learned about Christianity makes me realize that Bart is spot-on in this episode. I understand that there are political and historical reasons for Christianity having dozens of different sects that barely seem different, but it seems utterly ridiculous to me. It’s all the same thing when you boil it down, and it just seems like there are sects because people like to have something to fight over. That ending, with people waging war over which friendly notion Bart preached isn’t a new idea, but I think it’s completely accurate. I’m not a fan of religion, and I think it’s responsible for more strife than good in this world, but I also know that if we somehow abolished it people would just find some other reason to arbitrarily hate other people. That’s just how we’re wired apparently. But that’s all a little heavy, so as a final note I’ll just say that this episode is okay, focuses on some interesting theological issues, and of course ends in a way that means we’ll never speak of Homer and Bart’s Catholicism every again.

Take Away: Religious sects are weird and arbitrary, and seem to only exist so one group of people can assume they’re better than another group.

“The Father, the Son, and the Holy Guest Star” was written by Mark Warburton and directed by Michael Polcino, 2005.

Tagged as: 2005, Lifetime of Simpsons, Season 16, The Father the Son and the Holy Guest Star, the Simpsons