Howdy folks and welcome back to Lifetime of Simpsons. And what do we have to talk about today? Why the beginning of Season Seventeen. That’s right; we’re onto the seventeenth year of this goddamn show. And, while I would assume that you would maybe put your best foot forward and start the season off with a really good one to hook people, they decided to go a different route. For the first time in several seasons we aren’t starting with a Treehouse of Horror, and are instead having a good old ‘Marge and Homer have an inexplicable fight’ episode, but with an added twist. Manatees. Intrigued?

The episode starts off with Homer sitting on the couch, watching football, and inexplicably rooting for the Broncos. C’mon guys, Homer canonically hates the Broncos! Whatever, he’s rooting for them because he’s gambling on them, and has chosen the Broncos based on the advice of some cartoon pig that give you gambling tips. He then starts a chat with Lisa, ignoring the fact that these two famously made a lot of money on football gambling, and she explains that it’s all a scam.

Homer obviously doesn’t give a crap about Lisa’s rock-solid logic, and decides to double down and bet an obscene amount of money on gambling based on the pig’s recommendations. And this directly results in Homer getting his hands smashed by Fat Tony and his crew. Apparently Homer didn’t just bet a bunch of money on football, he borrowed money from the mob to bet on football. And it has blown up in his face, like crazy.

So Marge and the kids pack into the car and head out to Santa’s Village, despite the fact that it appears to be summer. We had a place like this in Colorado when I was kid, but we never thought to go there outside of winter, so I have to assume it was like this in the summer. Because it’s a goddamn mess. No one is wearing their costumes, because it’s too hot, the reindeer are dying, Santa’s too busy reading Tom Clancy and having a heart attack, and everyone just seems surly.

She’s rather furious, but instead of just railing against Homer for hours like usual, she just decides to storm off in anger. She leaves Homer to look after the kids, gets into her car, and just starts driving, with no destination in mind. And, eventually she ends up at some beach. She gets out of the car, getting ready to call Homer on the pay-phone and tell him that she’s coming back. But when she’s in the booth she gets a sudden visitor. A goddamn manatee.

Apparently the beaches near Springfield are chock full of manatees, and she’s happened to come across a group of them being taken care of by a handsome biologist named Dr. Caleb Thorn. And as soon as she introduces herself to Thorn she decides to not go home quite yet, and spend some time with him. Which for some reason takes the form of the two of them going to a diner while Marge yells about her husband and all of her marital woes to a complete goddamn stranger.

For some reason Dr. Thorn isn’t horrified at this behavior, and instead actually gives Marge some solid advice, basically that Homer is the man he is, and she’s just going to keep being disappointed if she expects him to change. And this, for some reason, makes her decide that she shouldn’t go back to her family for a while, and instead hang out with Dr. Thorn and save manatees while trying to find herself. So that’s what she decides to do, while not telling her family. 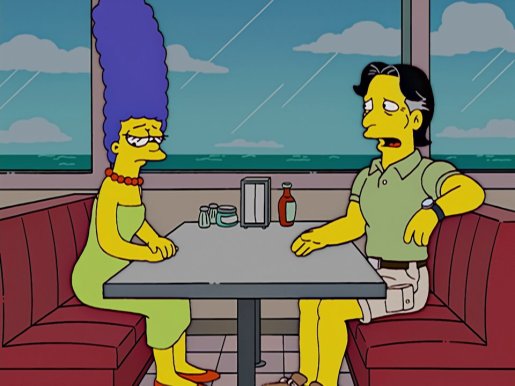 Homer and the kids obviously freak out about the missing Marge, and start driving around trying to find her. They somehow end up in the very diner that she and Thorn has lunch at, and the waitress points them in the right direction. So Homer and the kids hit the road again to find her, right as Marge is hanging out with Thorn and his team, cleaning some gross manatees. She really seems to be taking to it, and seems to be a natural manatee-cleaner.

Meanwhile, Homer and the kids are lost out in the country, trying to find where Marge and the manatee-people have gone, and they decide to stay with some distant relatives who eventually get revealed to be related because their dogs are brothers. This family lives in the country, but they’re actually rather sophisticated a cultured, which results in Homer just making fun of them and calling them rubes for an absurdly long time.

He does not. Homer decides that the only way to get Marge’s attention is to also obsess over manatees, and right on time he notices a pack of manatees being harassed by some bros on jet-skis. So Homer gets in a swan-boat and goes to insult the bros, successfully getting them to stop attacking the manatees, and start attacking him. They beat the hell out of Homer until his weird relative shows up to scare them away, at which point Marge comes to console the broken Homer, and realizes that taking care of big dumb animals is her purpose in life, and Homer fulfills that. So everything’s fixed. Oh, and we get an insane ending with Homer sending a manatee to fill in for him at work, causing it to have hijinks with Mr. Burns and Smithers. 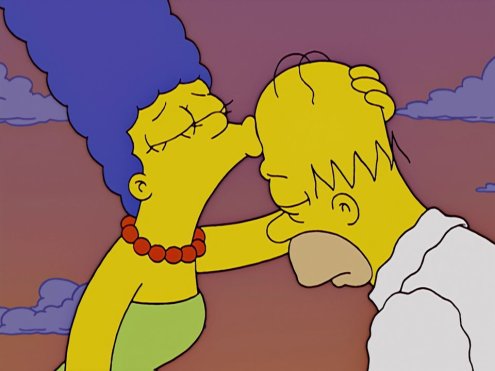 Yeah, not the best way to start off a season. I’ve been very on the record lately that I’m not a fan of the recent glut of episodes where Marge and Homer’s marriage are instantly put on the rocks, and then magically fixed. This used to be a rare plot to pop up, and in retrospect they make just as much sense. But because they were few and far between they worked. But what bugs me about this episode is that it seems so cannibalized from previous plots. We start off with all that football gambling stuff, just like “Lisa the Greek” and then by the end we’re completely ripping off the moral of “Secrets to a Successful Marriage.” Seriously, it’s the same ending. Both end with Homer being forgiven because he makes Marge realize her purpose in life is taking care of him. Which is a shitty moral, let alone one to use multiple times. Plus, what the hell was with the manatees? Were they in the new or something, or did one of the writers’ kids have to do a report on them? It’s just so weird and out of left-field to ultimately have no purpose. Whatever. Hopefully things pick up from her. It’s not a high bar to jump over.

“Bonfire of the Manatees” was written by Dan Greaney and directed by Mark Kirkland, 2005.

Tagged as: 2005, Bonfire of the Manatees, Lifetime of Simpsons, Season 17, the Simpsons