Howdy folks and welcome back to another week of Lifetime of Simpsons. We’re going to be crossing over into Season 17 this week, but for now we get to focus on a really odd episode about Homer and Ned’s friendship. It’s kind of all over the place, but it’s solid for this period of the show. Let’s dive on in.

The episode starts off with Lisa sitting alone in her room listening to NPR, which is a very depressing image. But while she’s listening to a show about Peruvian banjo music she overhears that they’re holding a call-in contest to get tickets to the premiere of a new art film, and she flips out. She calls into the station, being the only person who did so, and manages to snag four tickets to a depressing movie. So she marches downstairs and informs the rest of the family what they get to do that day.

The family is hesitant, but they decide to go through with it, and drop Maggie off at Ned’s house before they go, assuming that Ned had nothing better to do than watch their child. Which was accurate. And once that’s taken care of they head out to some rundown indie theater, sit in awful seats, and watch a depressing Albanian movie about the horrors of war. Which I guess is some people’s experience with World Cinema, but in my experience most indie theaters are pretty decent.

Everyone but Lisa has a horrible time at the movie, but are trapped there because Lisa wants to watch it. And she adores it. But once that’s over they head back to pick up Maggie. And it turns out she’s had a great time. Ned has played with her and shown her all of his creepy Humble Figurines, which seem like nonsense but come back later in the episode in a big way. Oh, and while they’re chatting with Ned they find out that he’s kind of struggling financially ever since a giant left-handed store moved into town.

And what’s Ned to do about that financial woe? Why rent out part of his big empty house! Marge recommends it, and he takes to the idea immediately. He interviews a couple applicants, like Nelson and the Crazy Cat Lady, but he ends up picking two college-aged women who claim that they’re trying to escape the sinful dorms and live a wholesome life. Which is obviously right up Ned’s alley, so he lets them move into his spare bedroom.

Bart and Milhouse are obviously not really aroused by the website, they just find it funny, and so does Homer. He walks in on the boys watching it one day, and is instantly hooked on the site, both for the ogling factor and the fact that Ned is being made a fool of. So Homer does what anyone would do in this situation, and begins showing the entire down town the website, assuming that everyone will mock Ned as much as he does.

And shockingly, he’s correct. The town begins gossiping about Ned, talking about the site behind his back, while he remains completely oblivious. That is until Marge finds the boys watching the site, and is horrified. She marches Homer right over to Ned’s and makes him admit what’s going on. And Ned is livid. He kicks the girls out, and gets even more pissed when he finds all the pervs of Springfield waiting for them outside, laughing at Ned.

Ned is completely ashamed that he’s becoming a laughingstock in the town, and is just incredibly disappointed in Springfield. Ned starts talking to Rod and Todd about how he wants to live in the fictitious and idealized 1950’s that Republicans believe in, and decides that he wishes life could be more like his weird Humble Figurines. And while he strikes upon that point he finds that they’re all made in a Pennsylvanian town called Humbleton, and he gets an idea.

Ned decides to sell his house, pack the boys up, and move to this town sight-unseen. He doesn’t even tell anyone other than sticking a note on his door. But no one really seems to care that much, and they decide that life will go on, and that they should make a good first impression on their new neighbor that’s buying Ned’s house, a high-school wrestling coach that insists on being called Coach Clay, who immediately starts taking advantage of Homer. 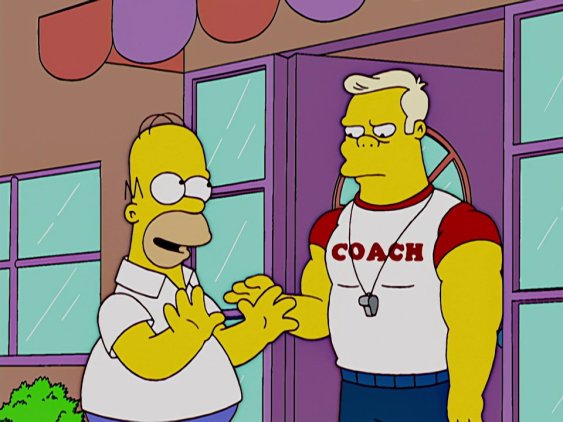 Over in Humbleton Ned and the boys get set up, and it’s a horror-show. The town is ridiculously saccharine and exactly what white people who are terrified of minorities thinks life should be like. And Ned is super into it. He even gets a job at the Humble figure factory, which seems to employ most of the town. Unfortunately there’s a slight hiccup when the foreman tells Ned that they don’t allow mustaches in the factory, or the town, and tell him he needs to shave.

And things aren’t great for Homer either. Coach Clay is a complete asshole, and blares music all the time, keeping Maggie up. He also just treats Homer like crap, or to be more specific, treats him roughly like Homer treated Ned. But things really reach an extreme when Clay begins randomly cutting down trees and ends up knocking out the Simpson’s power, and more importantly, cable. And this is a bridge too far for Homer, who decides to go get Flanders and bring him back.

Meanwhile, Ned is having some struggles. He decides that he doesn’t want to shave his mustache and changes his ways, and quickly becomes Humbleton’s rebel. People start actively hating him while he flaunts their ridiculously conservative beliefs, and ends up becoming the town pariah. Which is exactly when Homer shows up. Homer explains that he completely misses Ned and wants him back, and since life is so terrible in Humbeton Ned decides to do it. He packs the boys back up, comes back to Springfield, and kicks Coach Clay out since his check bounces and he actually doesn’t own the house. And just like that, everything goes back to normal. After a party, of course. 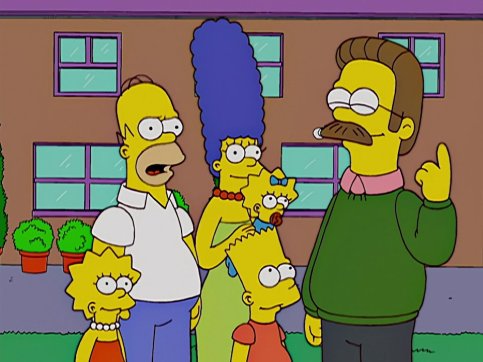 Okay, listen. This wasn’t a particularly great episode in the grand scheme of things, but for this time period I actually quite enjoyed it. I’m always a fan of Ned and Homer being friends, and I liked the central conflict in this episode. The idea of Ned accidentally letting porn be filmed in his house is a little ridiculous, but Homer telling the entire town to mock Ned is perfect. And Ned packing up and moving to this insanely conservative town was a really fascinating idea. The Humble Figurines are ridiculous, and as someone whose grandmother collected Precious Moments figurines, I totally recognize the weird idealized world that they come from. But I think the thing I liked most about this episode was Ned becoming the liberal rebel of a place. I like Ned Flanders, despite the fact that he’s often used as the butt of jokes. In episodes that don’t revolve around Ned he’s usually just a caricature of everything horrible about religious people. But when he’s the focal point he gets much more depth, and I love the idea that while Ned would love to live a conservative life, he does have a little bit of a wild streak in him. He had a line, cutting his mustache, and when they asked him to cross that line he decided to completely rebel and rage against the machine. Which I loved. I’ll say it again, this episode is just kind of decent when put up against the Golden Age, but for the end of Season 16 this is pretty solid.

Take Away: If an acquaintance of yours is being taken advantage of, maybe don’t make it worse and mock them?

“Home Away from Homer” was written by Joel H Cohen and directed by Bob Anderson, 2005.

Tagged as: 2005, Home Away from Homer, Lifetime of Simpsons, Season 16, the Simpsons