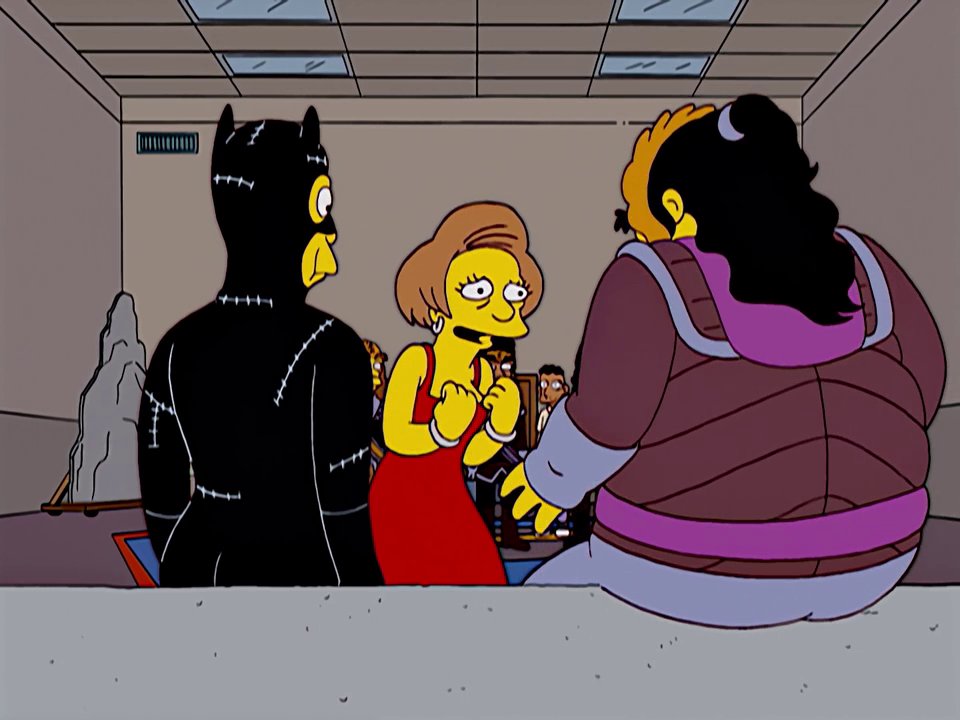 I’m not going to lie folks, we have a really weird week lined up. There are a few enjoyable episodes, but there’s a lot of weird garbage in here too. And we start the week off with the wrap-up on an ongoing story that used to be great, but ends with a big old thud.

The episode starts with an incredibly weird scene where Homer and Marge are laying in bed, getting ready to sleep, while Homer whittles batteries to make them smaller. This irritates Marge, and she goes to sleep on the couch. This does not come back for quite some time, and feels very superfluous at first. Because we immediately cut over to the Elementary School where Bart is participating in some kickball game, which ends when Willie runs the ball over with a tractor.

But, once again, this does not matter at all, and we move on to the classroom where the kids are listening to Principal Skinner read some announcements. And after the real ones are out of the way he announces that that weekend will be his and Mrs. Krabappel’s wedding, and he tells all the kids about their honeymoon in the hopes that no one comes to prank it. But the kids seem to be in a good mood, because they don’t threaten to ruin the honeymoon, and instead congratulate Mrs. Krabappel on her impending nuptials.

But since the marriage is coming up, that means it’s time for parties! For some reason Marge is hosting Edna’s bachelorette party at the Simpson’s house, with all of the women of Springfield. They give her edible panties and bring Duffman in to be a stripper. Oh, and when Wiggum, Eddie, and Lou are called in for a noise complaint they get drawn into the stripping too, and for some reason become a much hotter commodity than Duffman.

Meanwhile, Homer is hosting Skinner’s bachelor party at Moe’s, and it quickly becomes apparent that it’s a total drag. Skinner doesn’t seem to have friends, and just has to drink with Homer, Lenny, Carl and Chalmers, and once he cuts loose he actually does begin drinking quite a bit. Which turns out to be a bad call, because Skinner is a sad drunk, and begins telling them all about how he has cold feet, and doesn’t think that he can go through with marriage.

So Homer heads home and tells Marge all about Skinner’s second thoughts, and they make a pact to do everything they can to make the wedding go through. When the actual wedding begins the next day, at the Elementary School gym for some reason, everyone is working together to keep an eye on Skinner and keep him from bolting. He does try momentarily, and Homer tries to give him a pep talk, which is when Skinner says that he has second thoughts.

Which came at a bad time, because Edna was literally right behind him when he said that, so when the ceremony begins and Lovejoy asks if anyone has a reason that they shouldn’t get married, she speaks up. Edna says that she doesn’t want Skinner to marry her if he doesn’t want to, and calls the wedding off, running away while Skinner has to awkwardly stand around and participate in the reception alone. And, as you could imagine, it’s very sad.

For some reason though, everyone seems to take Skinner side on this, even though it was him that said he didn’t want to get married. So when Edna goes back to teaching all the kids make fun of her for breaking Skinner’s heart, making her mad. Because Edna isn’t depressed about the whole thing. She has a talk with Marge and tells her how she’s glad that it happened the way it did, because she didn’t want to get stuck in a loveless marriage, which makes Marge think about the battery incident in the beginning, and makes her start to hate her marriage as well.

But you know who is depressed? Skinner. He’s decided that now that he’s lost Edna, he wants to marry her. And, once again, because Skinner has no friends he decides to ask Homer for help. So, acting as Skinner’s Cyrano, Homer hides in a bush while Skinner tries to talk to Edna on her balcony. Unfortunately for Skinner Marge is also there, helping Edna remain strong, so we basically have Homer and Marge talking to each other through Edna and Skinner. And that does not end well. Edna stays strong and tells Skinner to beat it, wanting to enjoy being single.

Which is where things get weird. Because Edna decides to return all of the wedding gifts that she and Skinner were given, and one of her stops is to drop off a Hulk melon-baller that Comic Book Guy gave them. So she stops by the Android’s Dungeon, and for some reason she starts to get charmed by Comic Book Guy. He acts self-deprecating, and somehow ends up getting a date with Edna. The two then leave the shop, and go spend time together.

But that night Skinner decides for one more attempt to win Edna back, and gets some kids to play music, and some boys to sing, and ends up serenading Edna’s apartment. Unfortunately when the balcony door opens, it’s not Edna. It’s Comic Book Guy. Apparently their date went so well that they slept together, and now Comic Book Guy is taunting Skinner with that information, telling him that they’re in love and going to the BiMonSciFiCon later that week.

So the Simpsons go to the BiMonSciFiCon to stop Edna from dating Comic Book Guy, and we get some goofy comic convention jokes while Homer and Marge snipe at each other since their marriage is on the rocks now. Oh, and we also get a cameo from Matt Groening himself who informs the viewers that he loves to be harassed in public. But after some gags the Simpsons spot Comic Book Guy and Edna, who are going into a conference room.

They chase after the pair, and are shocked to find that there’s about to be a mass Klingon wedding. Which is something I totally saw at the Denver Comic Con. Weird. Anyway, Edna is about to marry Comic Book Guy at a comic book convention, and the Simpsons have to figure out how to stop her. Which is aided when Skinner shows up, dressed as Catwoman, and challenges Comic Book Guy to a duel.

The two fight for a while, and it doesn’t end that well. But it’s finally finished when Edna announces that she doesn’t want to marry either of them, she wants to dump them both and be single. So Edna goes off to enjoy her life, Comic Book Guy goes back to his life, and Skinner goes back to being mocked by his mother.

Oh, but we still have to finish up the weird Homer and Marge plot that slowly crept up along the episode. Apparently Marge is fed up with Homer as a husband, causing him to have to do something stupid to fix it all. Which he does by revealing that he planned a ridiculous third wedding for them, in their bedroom. He has some kids from the school band hiding in their closet and the Klingon priest ready to marry them again, in their pajamas. Because that’s romance.

I’m not a fan of this episode. Taking aside all the weird crap with Homer and Marge and how they just shoved one of those “Homer and Marge’s marriage is on the rocks” plots into what was basically a C-plot. That’s stuff annoying, but it’s not as annoying as the fact that the end of the Skinner/Edna romance plot was this weird and unsatisfying. The early episodes about Edna and Skinner were really great, but the last couple seasons they’ve been pretty terrible. I mean, the last episode with them ended in a place where Edna should have broken up with Skinner, but instead they got engaged and ignored all of their relationship problems that that episode created. I guess we’re lucky that they didn’t end this episode with Edna ignoring Skinner’s defects again and getting married at the end, but it’s still just such a bummer of an ending to the story. It just felt like they decided that these characters are more interesting sad and not together, so they did that instead of fulfilling the story they’ve been building.

Take Away: If you don’t want to get married, don’t let things progress all the way to a wedding.

“My Big Fat Geek Wedding” was written by Kevin Curran and directed by Mark Kirkland, 2004.

Tagged as: 2004, Lifetime of Simpsons, My Big Fat Geek Wedding, Season 15, the Simpsons