Arrival and the Importance of Communication 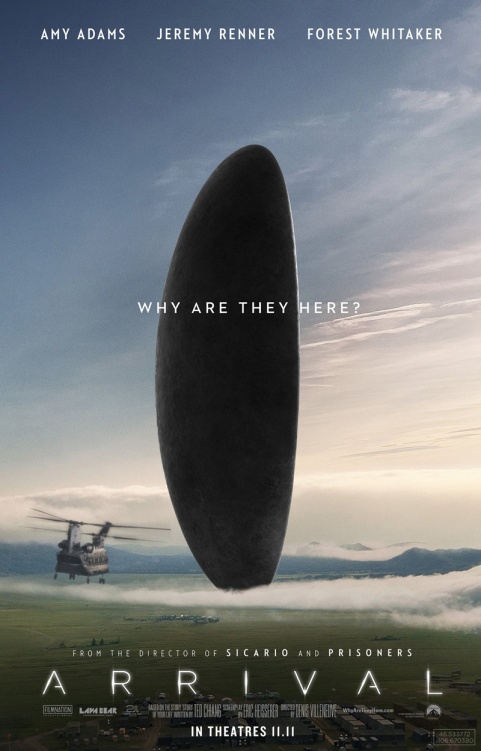 I promise everyone, I’m really trying to stop talking about the results on the American election. It’s just a serious bummer that just seems to be making the country more and more depressed as every day goes by. We need things to occupy ourselves with. Not to distract, we need to remember what we’ve done, but we still need some joy and optimism in our lives, otherwise we’re all just going to collapse. And as this weekend approached one of the most unanimous sources of joy that I’ve heard about is the new science fiction film from the terrific Denis Villenueve, Arrival. I’ve been excited for this film for quite some time now, since it was appearing at several film festivals this year and just about everyone who has seen it has claimed that it was one of the best of the year, and mandatory viewing. And that recommendation just got stronger when the election passed and we realized that we all lived in a very different world than the one we thought we did. So I went in with pretty high hopes, expecting yet another masterpiece from Villenueve, whose films I’ve all loved. And you know what? This movie delivered. And then some.

Arrival begins with a renowned linguistic professor named Louise Banks (Amy Adams) heading into her college to teach a class. As she goes to class however she finds that all the students seem rather distracted, and she ends up turning on a TV and learning something shocking. Twelve alien crafts have appeared around the globe, becoming humanities first contact with alien life. The aliens don’t seem to be declaring war on humanity though, they’re just floating there, ominously. So, as the world starts to fall into baffled chaos, Louise is approached by an Army Colonel named Weber (Forest Whitaker) who wants her to come to the American craft in Montana. So Louise is flown to Montana with a theoretical physicist named Ian Donnelly (Jeremy Renner) and the two are given one simple task. Figure out how to speak to the aliens. So Louise and Ian are brought up into the alien craft with a group of soldiers, and they’re introduced to a whole new world. The crafts seem to be made of some unknown substance, emit to radiation, don’t seem to have any propulsion system, and don’t seem to communicate between themselves. And the ships open up every 18 hours for people to enter and try to communicate. The scientists are then brought up into the ship, and come face to face with the aliens, who are separated from the human with a glass-like window. The aliens, who they begin to call Heptapods, are large 7-limbed octopus-like creatures who communicate by letting out rings of ink.

And that’s most of the movie. Louise and Ian begin doing everything they can to communicate with the aliens, while similar teams all around the world try to accomplish the same task. There’s a bit of communication between the different nations, but they all seem to be in a race to figure out what the aliens are here for first. And if that wasn’t complicated enough Louise is also dealing with vivid flashbacks to the death of her daughter. But she fights through it, and begins actually making a lot of progress with the Heptapods, slowly but surely finding ways to communicate between each other. The humans begin learning the writing of the Heptapods and the Heptapods slowly learn the writing of the humans. Which is when things get complicated. Because when they finally reach the point that they’re able to ask them why they’re on Earth, they tell the humans that they’re there to give them something that may be either a weapon or a tool. And things get even more tense when it’s announced that China has deciphered that message as well, and has taken it as an enemy action, getting ready to declare war on the aliens. And this, coupled with the decision to try and blow up the American ship by some idiot soldiers who listen to too much right-wing conspiracy radio, things are looking good for humanity or our heroes. Typically I dive right into movie, telling you exactly what happens in them, spoilers be damned, but for this film I’m going to take a different approach and just insist that everyone check out the movie. There are some twists and turns, and the movie goes in a very weird direction that I didn’t anticipate, and it was fully worth the surprise, so I’m not going to be the one to ruin it for you.

This movie was just spectacular. I loved basically everything about it. Denis Villenueve is really set to be one of the all-time great directors, and one of the things I love so much about his work is how different the all are. He isn’t being pigeon-holed into a particular genre, and seems to be trying this hand at whatever catches his fancy, and we can check sci-fi off the list, because he knocked it out of the goddamn park. I really like Amy Adams and Jeremy Renner in general, and they were both terrific in this movie, delivering wonderful performances that seemed realistic and full of awe, just like you would imagine from two people who are meeting aliens. I was also thrilled to see some really unique alien designs. I don’t think I’ve ever seen squid-aliens before, and it was a really interesting route to go, especially with the communicating with rings of ink that they jet from their appendages.

But the thing that really fascinated me about the movie, and that really set it apart from basically every other alien movie I’ve ever seen was that central premise. This wasn’t a movie about aliens coming to Earth and invading like 90% of alien movies. It also wasn’t one like The Day the Earth Stood Still that basically becomes like a fish-out-of-water tale. Instead the team behind this film have made a story that revolves completely around something that usually just gets breezed by in alien movies. Translation. It’s a film that’s totally revolving around the quest to understand another culture. And that’s pretty damned important right now. Sci-Fi films have always pretty much always been used to explore issues in the real world through fantastical elements. And this movie nails that concept. We live in a world where people are gleefully ignoring other members of our species. Be it literal language barriers, religious ones, nationalities, or even just different political parties, we insist on ignoring the viewpoints of others, and refuse to find common-ground and ways to speak to each other. Which we’re all guilty of. I’ve found myself completely baffled at people who would vote for Trump this election, and have found myself just writing those people off as hopeless. But this movie legitimately reminded me that that’s no way to live life. We need to talk to each other, figure things out. Because the only way that humanity is going to progress is if we find unity. If we remain stubborn and let our differences divide us we’ll just end up destroying each other. But if we focus on the commonalities between us all we can strive to do something better. Something magnificent. And that’s exactly the message that I needed in my life at this time.

Arrival was written by Eric Heisserer, directed by Denis Villenueve, and released by Paramount Pictures, 2016. 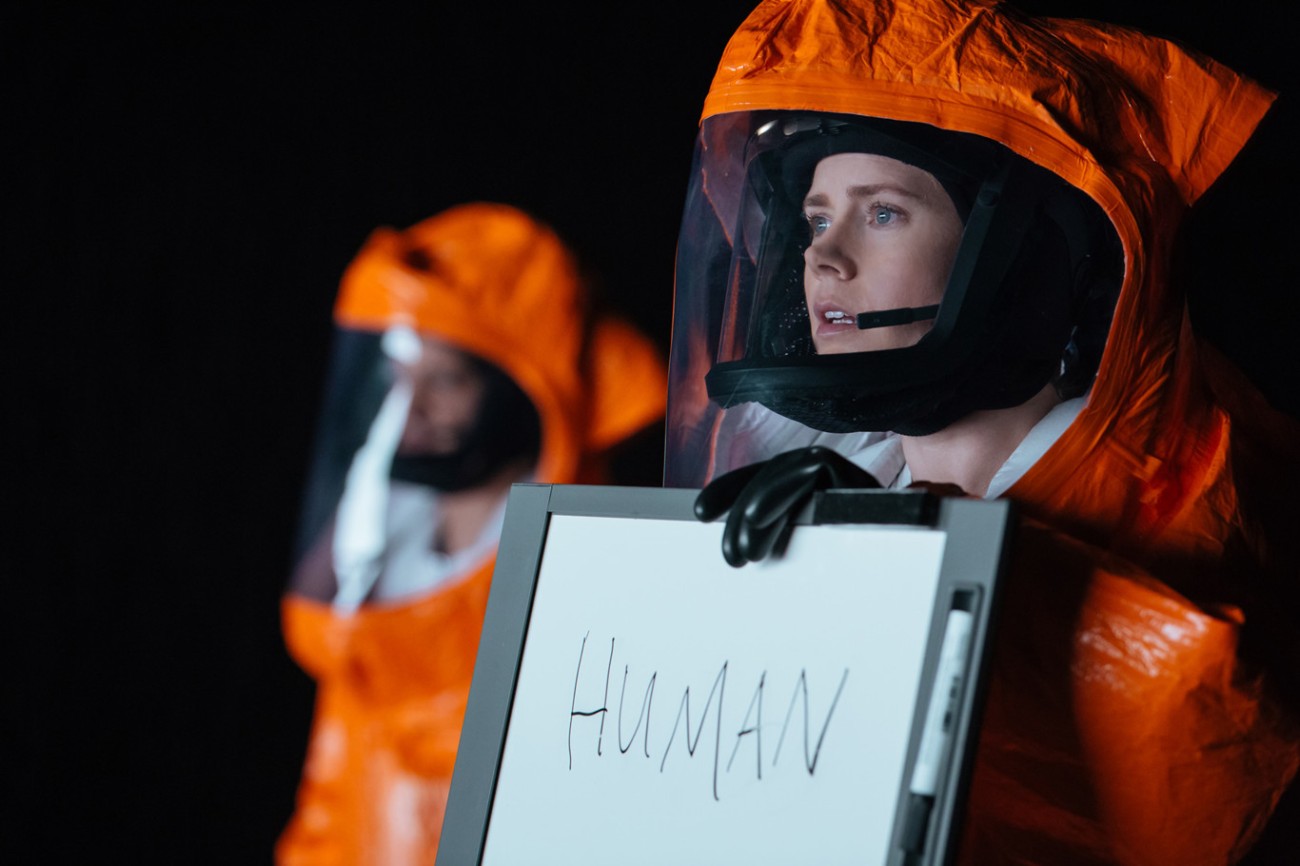