Woo! 4/20! Weed! Woo! That’s right everyone, did you remember that there’s a crazy Simpsons episode all about pot? I sure didn’t!

The episode starts off with Marge super excited about their dinner that night, making the family guess what’s special about it. And when she only gets sarcastic jokes in response she just gives up and tells them that all of their vegetables are genetically modified. Which is a good thing? Well, Lisa doesn’t think so, and they decide to have a little debate that’s won when Lisa shows Marge that her potato is eating a carrot. So that’s problematic.

And that discovery makes Marge decide to stop buying vegetables completely and start growing her own. So she sets up a little garden, gets to work making a scarecrow out of relics from previous episodes, scares off the Flanders who are praying at the accidental cross she made, and gets everything growing. And things seem to be going good. Especially the scarecrow, because it’s continuing to piss of a group of crows that really wants Marge’s veggies.

However disaster strikes one night when Homer comes home and spots the scarecrow in the backyard, mistaking it for a burglar. So he sneaks around the house and bashes the scarecrow to death, earning the sudden respect of the crows. And by taking out their enemy, Homer has now become the alpha crow, and has the entire murder obeying his every whim.

And people are not happy. Everyone is intimidated by the crows, despite Homer coming up with cute names for them, and it just seems to be a creepy thing. But Homer doesn’t seem to mind. That is until the crows make a mistake, and decide to let Maggie fly. So they pick her up and start carrying her around in the backyard, until she slips out of her onesie and falls to the ground. Homer manages to catch her, and then berates the crows, swinging at them. Which causes a coup that ends with the crows viciously attacking Homer, especially his eyes.

So Homer is brought to Dr. Hibbert, who pretty quickly informs Homer that there’s not much he can do about the searing eye pain that came along with the ocular stitches. The only thing he recommends is medical marijuana, which I guess must have been a brand-new concept in 2002 when this episode came out, which seems silly to me, living in Denver where I could buy weed legally from one of the dozens of shops around my neighborhood at any time.

But Homer decides to give weed a shot, and heads home with a pill-bottle full of joints, and quickly locks himself in the bedroom to experiment. And he likes it! He starts toking up in the bedroom, with none of the family the wiser. That is until smoke starts drifting down the stairs and Homer starts loudly signing Deep Purple. Which is usually a good sign that weed is involved. So the family break into the bedroom and are horrified that Homer is smoking weed. But when he shows them his prescription and explains it’s legal, they just have to deal with it. 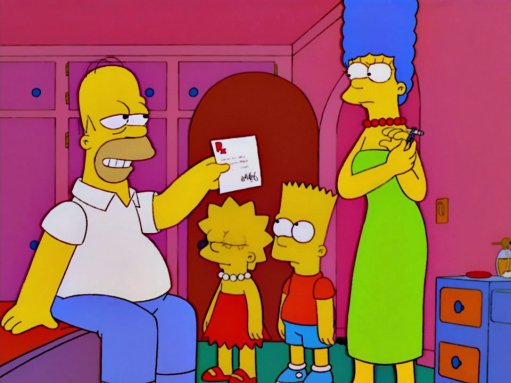 And just like that, Homer becomes all about getting high. He seems to get stoned 24/7 and starts acting a tad odd. He keeps Lisa up all night, paying her to play the saxophone for him, and just generally acting like a stereotypical stoner. But let me tell you, I’m not sure what kind of week the writers of the Simpsons have taken, but it seems more like Homer is doing LSD, because he’s hallucinating like crazy. But things take a slight turn when Ned comes over to the house trying to get signatures for a ballot measure, and ends up spending the whole day with Homer reading him the Bible. At which point Homer absent-mindedly signs the measure, which he doesn’t realize is to re-criminalize medical marijuana.

A new plot starts to arise however when we learn that the Nuclear Power Plant is pretty strapped for cash, and Mr. Burns is having an emergency meeting with investors to drum up money. And to accomplish that he thinks he needs someone to laugh at all his terrible jokes. Enter stoner Homer who laughs at everything! Burns loves how jovial Homer is, and ends up making him Executive Vice President of the Plant, causing Homer to end up coming home in a suit and a new car, which is hilarious.

But before that Burns plot gets going we have to deal with the pot initiative, because while Homer’s hanging out in his attic with Otto he sees a news story on the measure, and decides something needs to be done about it. So Homer organizes a rally n the town square, complete with a concert by Phish, in order to get everyone to fight this measure. However, while Homer is giving a speech the members of Phish realize that something is amiss. The vote was the day before. They all missed it, and they lost. No more medical marijuana. 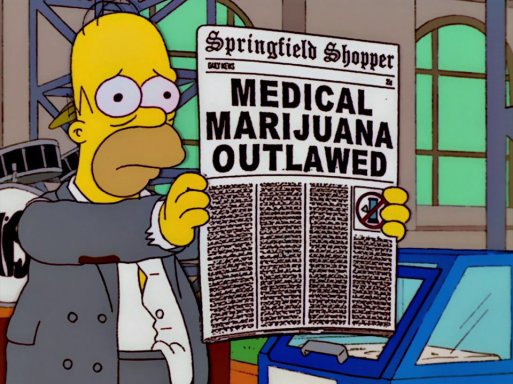 Which is going to be a problem for Homer, since that investor meeting is coming up, and he’s been taking pride in telling the family that he’ll never do drugs again. But Homer thinks that he can still laugh at the jokes, and agrees to come over to Burns’ mansion for some sort of dry-run of the speech with Smithers. And things are dire. Neither Homer nor Smithers find the speech funny at all, and just sit there awkwardly until Burns goes to take a bath. However, Homer has a great idea, and gets Smithers to start smoking pot with him to fix the jokes.

And it seems to be working, the two are super relaxed now. That is until they realize Mr. Burns has been gone for an hour, and they go to the bathroom to find him seemingly drowned to death. So that’s a problem. But with the big meeting coming up, they decide to do something insane. They pretend that Mr. Burns is alive, and make a massive marionette out of him that Smithers is puppeteering during the speech. And it goes great! The investors love fake-Burns and decide to invest in the Plant much more than they had been. Plus, during the puppet show Mr. Burn’s heart starts beating again and he comes back to life. So everything’s fine! 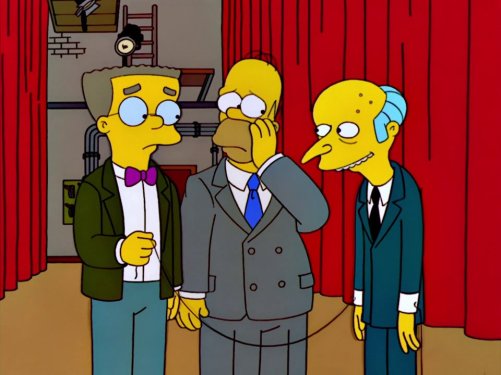 This is a really weird episode, but I kind of dug it. Although, it really feels like there were two scripts here that got smooshed together, because there’s a real divide between the “Homer loves weed and tries to shut down a ballot initiative to re-criminalize it” plot and the “Homer and Smithers need to pretend that Mr. Burns isn’t dead to save the Plant” plot. Maybe I’m wrong, but it really felt like this may have started as two scripts that they couldn’t get to work. But whereas that usually turns me off an episode, I kind of liked it here. The episode is just so silly. Although man is it weird how they portray marijuana use. Why was Homer hallucinating? That’s just like, wrong. I don’t get that. And it’s just fun to see Springfield look at the marijuana world, especially while living in such a hub of that community. It’s just a fun, stupid, good-time of an episode.

Take Away: Medical marijuana, when used correctly, has serious benefits. And it’s super easy to pretend your boss is still alive to your advantage.

“Weekend at Burnsie’s” was written by Jon Vitti and directed  by Michael Marcantel, 2002.

Tagged as: 2002, Lifetime of Simpsons, Season 13, the Simpsons, Weekend at Burnsie's