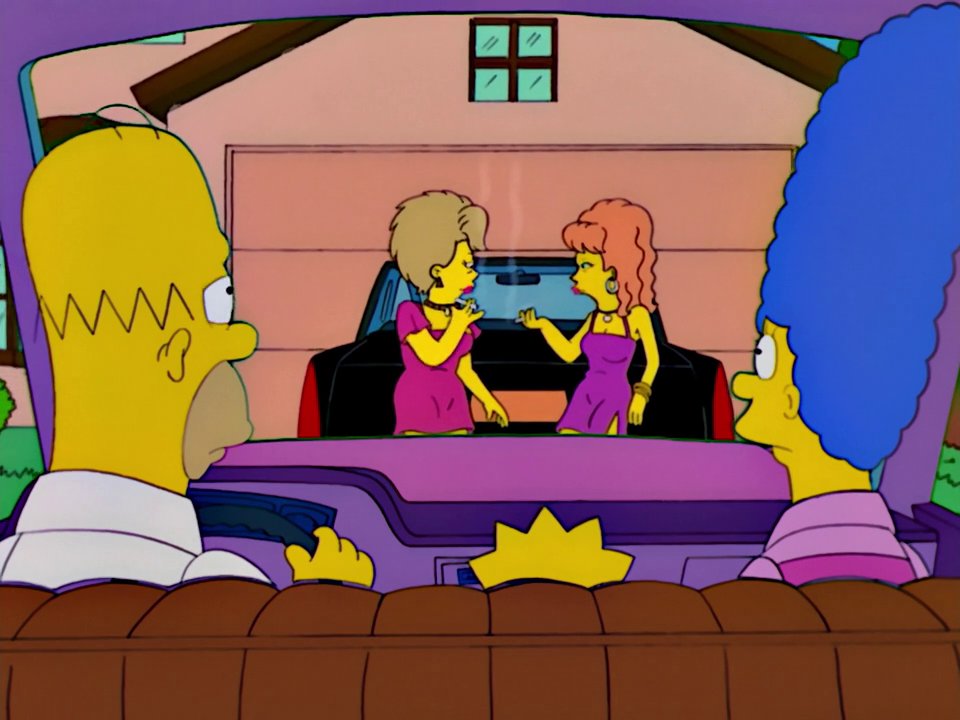 I’ve talked on the site before about how ridiculous it is that the show kind of resets at the end of each episode. Because it’s a little odd. Every now and then there’s things that will carry over from episode to episode, but more often than not they’re these weird little self-contained stories that’s events will never be brought back up gain. But look what we have here, an episode that remembers some thing insane that happened in a previous one!

Things start off at the Springfield Republican Headquarters up on it’s creepy mountain. They’re there to discuss how to ruin the world since they’re in power again, and start spit-balling ideas. We see Krusty pitch destroying PBS to spite Muppets, Dracula just want to destroy hippies, and the Rich Texan wants to destroy the environment. And Texas wins! So the Republicans get to work repealing all of the progressive environmental laws that the previous administration passed, and even go so far as to make recycling a felony.

And the effects are pretty quick, because Springfield rapidly becomes some polluted hellhole that you normally wouldn’t see outside of China, and they even start to get some good old acid rain, which starts scalding Willie. But a scorched Scotsman isn’t the worst thing to happen, because we also see that the rain has started to melt the aerial on the house, ruining the families television.

So with no other alternative, they decide to do what all families who are bored and ready to ruin their day does, they play Monopoly! The family then curl up in the family room, put out the board, and start to play the game, and Bart quickly starts to kick ass. He even bankrupts Homer fairly early in the game due to his massive amount of hotels. However, while he’s busy humiliating Homer Lisa notices that all of the hotels are fake, and that Bart’s been cheating, leading to a huge brawl. 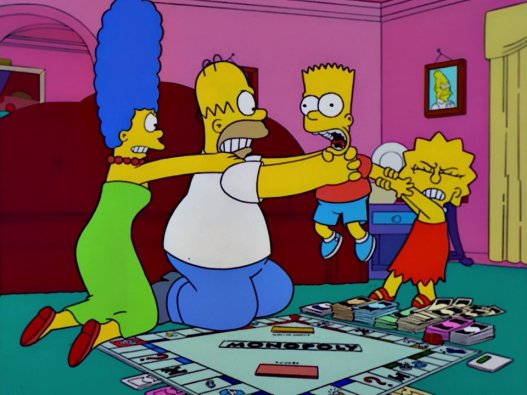 The family begin strangling each other and freaking out, as Monopoly is wont to do, and little Maggie has to call the police to break things up. So the cops show up, quickly assess that it’s a Monopoly-related domestic disturbance, and send in a robot negotiator to break things up. Which it quickly does by spraying them with some sort of taffy that balls them up so they can’t struggle, where they’re promptly arrested.

So the family are all in jail now, wondering where their life went so wrong, they’re approached by a social worker named Gabriel that Homer instantly assumes is an angel. He says that he’s been appointed by the court to get them back on track, and that he’s going to do everything in his power to figure out what’s wrong with the family, and fix it. So he begins following them around, figuring out their faults. Which are numerous.

Gabriel finds that Lisa is a ball of stress that’s just counting down the days until she can graduate and leave the family, Bart will do anything and everything for attention, Marge uses food to cover up any of her insecurities and to mask the families problems, and Homer is just a drunken lout. And the only way to fix them is with good old fashioned team building! So the family head out to the woods to spend the day together with Gabriel and fix their relationship.

Gabriel’s plan is pretty simple. He’s just hung their food up on a tree and expects them to work together to reach it. However, Homer doesn’t want to play that game and just grabs the car to knock the tree down. Which works, but starts rolling down the hill to a chasm, dragging Gabriel with it. And once it goes over the side of the cliff, Gabriel gets stuck on the tree, dangling above some wolves and cougars. 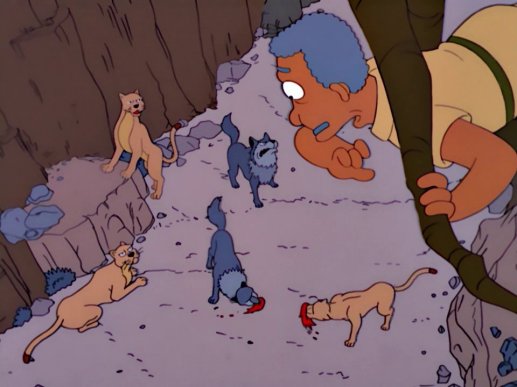 At which point Homer votes to just leave the man to die and pretend they never met him, but like always, Lisa is the voice of reason and convinces the family that they can work together. So they spring into action, finding a way to save Gabriel by lowering Homer down into the chasm on a rope that’s attached to the car so they can drag them back out. And after they grab Gabriel, disorientate the wolves and cougars with the beer from the lunch, they get him up and save him.

The family is fixed! And as they’re driving home, pleased that they’re a fully functioning family again, they realize that things couldn’t be better. Which is precisely when they get home and find that there’s a car in their driveway, and two women waiting for them. Amber and Ginger, the cocktail waitresses that Homer and Ned married in Vegas. Whoops!

So yeah, Homer apparently never actually told Marge about what happened in Vegas, planning to take it to his grave, and never did anything to legally annul the marriage, so now the two women are there to mooch of their husbands. Which works okay for Ned I guess, since he’s been awfully lonely since Maude died. But Marge? Not so much. She’s pretty furious, for obvious reasons, and kicks Homer out of the house, forcing him to sleep in the treehouse with his “wife.”

Homer heads out into town to try and fix things, and tries to get an annulment. But he ends up drawing Judge Harm as his judge, and she refuses to grant him the divorce since Nevada has bigamy. So he’s screwed, and forced to live in the treehouse once more. But Homer just cant stand Amber, and heads ends up trying to sleep in the doghouse, getting stuck in the process. And while he’s stuck, Marge gets some pity on her stupid husband, and goes down to talk to him, where they craft a plan to get rid of Amber.

So the next day Homer and Marge get in a huge fight that ends with Homer saying that he’s giving up on the family, and going to live his life with Amber. The two of them leave the house, and hit Moe’s to celebrate, where they promptly get Amber as drunk as they can. And when she blacks out they spring the devious part of the plan, making her get married to Grandpa, and renounce all other marriages. So Amber wakes up the next morning with a hangover and a new husband, and decides to just leave town and never come back, with Ginger who has gone insane from Ned’s piety. And everything’s back to normal!

I like this episode, despite some of it being pretty despicable. Like I said at the top, it’s always nice to see something come back in a Simpsons episode, and I think the idea of bringing the Vegas wives back was a really good one. It’s kind of ridiculous that Ned and Homer managed to get married and then just abandon the women, never to speak of it again, so I like that there were some consequences in this episode. But at the same time, holy crap is Homer shitty. I really don’t like when the show makes him out to be a horrible spouse, because I feel like he’s just a good guy, trying to do his best. But hiding an accidental marriage and never bringing that up with his wife is pretty ridiculous, and makes him a pretty big villain in this episode.

Take Away: Don’t get drunken marriages in Vegas. And if you do, maybe figure out how to nullify it at the time and not wait for it to come back and bite you in the ass.

“Brawl in the Family” was written by Joel H Cohen and directed by Matthew Nastuk, 2001.

Tagged as: 2002, Brawl in the Family, Lifetime of Simpsons, Season 13, the Simpsons