Apparently it’s not a good thing to work for the Mafia. You really learn important things on this show. This episode is so nuts, let’s just dive in. The episode starts with everything going wrong for poor Bart. He wakes up and steps on a toy, doesn’t get the prize in his Krusty Flakes because Homer already took it, Santa’s Little Helper rips up his homework (which my dog for real once did in elementary school too. It’s a weird conversation to have with your teacher), he misses the bus, he has to walk to school in the rain, and rips his pants on the playground. Jesus. That’s some harsh shit to throw at a ten year old, and Bart is not handling it very well, but through all of that, he kept himself going by knowing that that day the school was going on a trip to the Ah, Fudge! Chocolate factory, which was keeping his spirits up. But of course he forgot his permission slip, so he doesn’t get to go, and gets to spend the day with Skinner instead. 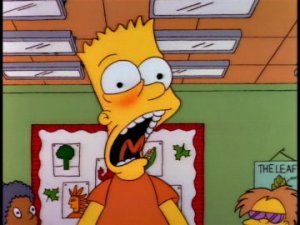 While Bart gets to lick envelopes, we cut over to the rest of the kids, who are having fun at the chocolate factory. They even get to watch a weird documentary about chocolate narrated by the always amazing Troy McClure. I think my favorite credit of his this episode was “The Revenge of Abe Lincoln.” I’d watch that. Back at school Bart continues to lick envelopes for the entire day, until his tongue is dried out and covered in blisters, which is horrifying. But Skinner lets him leave finally, and he skateboards home in the rain, before slipping and falling down some staircases, and just when he thinks his day can’t get worse, a bunch of guns gets pulled on him. 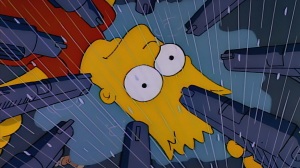 Turns out Bart has stumbled upon the Legitimate Businessman’s Social Club, which is the secret home of the Springfield Mafia. He meets the mobsters, including Legs, Louie, and the head of the family Fat Tony (Joe Mantegna). They decide that they won’t hurt Bart if he picks the winning horse of the race that’s about to start, and by chance he does, and the mobsters immediately like Bart. They then ask the ten year old boy to mix them cocktails. Which is something my folks did too, they taught my brother how to make a mean martini at a young age, and still rely on him as the bartender of the family now that he’s old enough to actual drink the things he’s making. But Bart has no experience in making Manhattans, so he consults a recipe book, and apparently makes a “superb” Manhattan, further ingratiating himself with the mobsters. They decide to give Bart a job as the bartender for the club, and we get a fun montage of Bart hanging around with the criminals, watching them cheat at cards and tip him ridiculous amounts of money. Bart starts to learn the ways of the Mafia, while he teaches them about things like Itchy and Scratchy.

But one day while Bart is working at the Club, Chief Wiggum drops by to ask Fat Tony about a missing cigarette truck, to which Fat Tony plays dumb. We then find out that Fat Tony is using Bart’s room as storage for the stolen cartons of cigarettes, which Homer assumes are his, and almost makes Bart smoke them all before the delivery man comes to get them. But that night Bart sees a report on the news about the cigarette truck, and hears Kent Brockman refer to Fat Tony as a criminal, and Bart finally realizes what it is his new friends do. I love the fact that apparently another truck of cigarettes is coming to Springfield, and was instructed to ignore stoplights and crosswalks. Bart goes back to the Club to confront Fat Tony about the news that he’s a criminal, but Fat Tony deflects it, and gives Bart a snazzy suit instead. 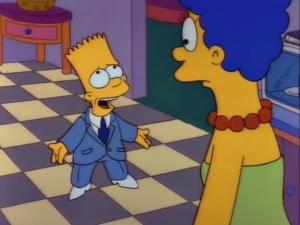 Marge starts to get nervous about Bart’s job, and tells Homer to go check it out. And because the mobsters love Bart, they pamper Homer, and let him win at cards so that he doesn’t take Bart away. But things take a turn for the worse when Bart starts acting like a mobster at school, and tries to bribe Skinner after he’s caught making Milhouse and Lewis make grafitti. Skinner does not care for that, and gives Bart detention. Back at the club, some important mobster is visiting, after hearing about Bart’s Manhattans, and when Bart doesn’t show up for work, Legs has to make one, and ends up insulting the guy. Bart finally shows up after they leave, and at first Fat Tony is mad at him, until he realizes Bart is being hassled by Skinner, and he immediately jumps to protect his little buddy. Unfortunately that means Bart accidentally siced some mobsters on his principal. We see them talk to Skinner, but it cuts out before we see what happens. Then the next morning Mrs. Krabappel tells the kids that Skinner is missing, to which they hilariously cheer, but Bart gets scared.

The town begins hunting for Skinner, and the police even bring in a psychic. And Bart is starting to get really stressed out, he even has a nightmare where he’s chases by dead Skinners who blame Bart for their death, ending in Bart getting electrocuted. He finally goes and asks Fat Tony if him and the mobsters killed Skinner, but then Chief Wiggum busts in, and they all get arrested. We then get an amazing court room scene, where the mobsters start to blame Bart for everything, and paint him as the head of the Mafia. And it works! But right before he’s found guilty, Skinner shows up, since apparently he wasn’t killed, and has been trapped in his garage under a pile of newspapers the whole time. The case is closed, and Bart is a free boy again. He quits his job with Fat Tony, and leaves the gangsters to their lives of wealth and power. The episode ends with the family together again, watching a TV movie about the case where Fat Tony is hilariously played by Joe Mantegna and Bart is played by Neil Patrick Harris. After Homer learns that the family doesn’t get any money for the movie, he calls producers crooks before we see Matt Groening, Sam Simon, and James L. Brooks’ names pop up. 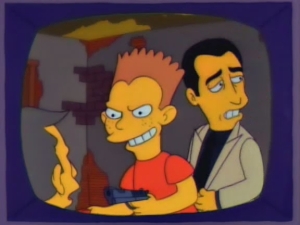 What a strange episode. I love it. Fat Tony is such a weird character, and I adore him so much. Why does Springfield need it’s own Mafia? Who cares! It’s great! And I love that the mobsters become so attached to Bart. He becomes their little mascot, and they love him. It’s a really crazy episode that bounces all over the place. We get to see Bart having a terrible day, his Mafia adventures, and even a court scene, one of my favorite things the Simpsons ever do.

Take Away: Don’t work for the Mafia. It may be fun and well paying, but they’ll turn on you.

“Bart the Murderer” was written by John Swartzwelder and directed by Rich Moore.

Tagged as: Bart the Murderer, Lifetime of Simpsons, Season 3, the Simpsons