The Dark Fantasy of the Unnoticeables 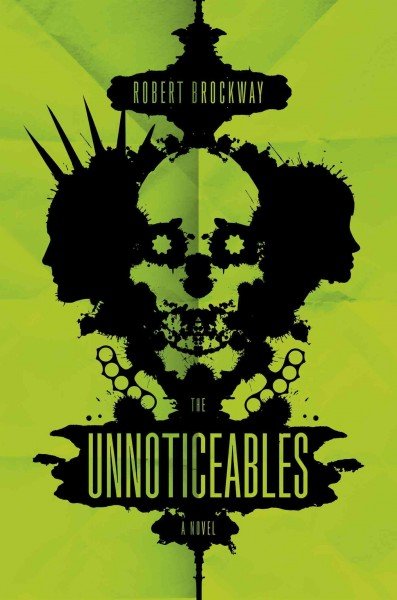 I think it’s a real shame that when people hear that a book is a fantasy, you automatically assume that it’s all about dragons and elves and stuff. And people can really be put off by that sort of thing. I suppose we’ve made weird genres like “Urban Fantasy” or “Magical Realism” that get people who wouldn’t normally read something called fantasy in the door. And it’s really a shame, because it’s a very under appreciated genre that is very hard to pull off. And I feel like this book nailed it.

Now, if you’re not familiar with the author, Robert Brockway, this is his second novel and he’s done a lot of work with the humor website Cracked. And I’ve been a fan of his for a very long time. Ever since he first started putting articles up on Cracked I was into his sense of humor and started looking into his other work, to the point that me an my highschool friends were pretty frequent commenters and reader of his blog he had going before he became a Cracked editor. So when he made the lead to novels, I was very excited. His first novel, Rx was a crazy dystopian sci-fi story that had a group of people wandering around a giant city sized building. And now he has a second novel, one that went in a very different direction.

The story of the Unnoticeables follows two different characters, separated by 36 yeah, each falling into the same mysterious world. We have Carey, a young punk living in 1977 New York, and Kaitlyn an aspiring stuntwoman in modern day Los Angeles. They’re both pretty typical twenty-somethings.  Kaitlyn is drifting through life, wanting a better life than the one she has now. Carey on the other hand is perfectly happy living his life of debauchery and squalor, partying all night and hanging out with his friends drinking all day. But then both of them find themselves embroiled in a crazy and mystical conspiracy. The book’s chapters alternate between the two characters as they start experiencing similar situations.

For Carey things are going great, until several other punks start vanishing, and no one seems to know why. And then he finds a creature they call a Tar Man, a giant sentient blob of black goop with brass gears for eyes that’s able to burn people to death with the slightest touch. Of course not everyone in his group of friends believes him, but they can’t come up with a better suggestion of how people are vanishing. Back in the present, Kaitlyn is working at a bar while trying to find work as a stunt woman. Then a friend of hers named Jackie invites her to go to a party with Hollywood people. And while there she meets a celebrity named Marco who is 100% Mario Lopez, which is hilarious. In case you aren’t a fan of Robert Brockway, his Cracked articles often feature bizarre pieces about how Mario Lopez is a soulless monster, which is exactly how he is in the book. Marco is a very odd man, who ends up trying to rape Kaitlyn, and reveals himself not to be a human, but she’s saved by a weird old homeless man who dresses like a punk. It’s Carey!

Carey then begins helping Kaitlyn understand the insane world she finds herself in. We begin to find out that they’ve stumbled on some sort of secret cult that pretty much rules the world. It comprises of four different types of beings that begin popping up in both stories. There are the “Angels” which are floating balls of light that seem to be in charge of everything, there’s the “Empty Ones” who are soulless people that act as recruiters for the cause like Marco, the Tar Men which split from people who come in contact with the Angels, and the Unnoticeables which are the other people who split from the Tar Men. The Unnoticeables are kind of like the Silence in Doctor Who, they’re nondescript people that you don’t remember details about if you’re not actively looking at them, and basically serve to get people to the Empty Ones. It’s kind of a pyramid scheme.

Anyway, the rest of the book features the two start to figure out what the hell is going on in the world. I really have an affinity for stories that involve people who have no idea what’s going on being thrown into a world they don’t understand. Eventually it turns out that this system has Angels that run everything, but they only have so many years they can be active before they need to find a new host. In the 70’s Carey was able to defeat the Angel, causing a homeless guy he knew to become the new Angel. Then in the current day Kaitlyn is put in a similar position that would make Carey the new Angel, and her it in the next cycle. But she’s able to defeat the cycle, possibly for good. But who knows, the story ends with ambiguity, and none of our characters ever really find out what really was going on, which is pretty great. The worldbuilding in this story was great, such a complicated universe it created, but it never got too crazy. It easily could have gone extra crazy, and spent chapter after chapter trying to explain what in the world is going on, but the strength of the book was that it focused more on the characters, letting us see how they reacted and grew. It’s a really terrific book, and downright hilarious. Give it a read.

The Unnoticeables was written by Robert Brockway, 2015