Let’s talk about Daredevil everyone.

He’s the best. I really and truly think that he’s my favorite Marvel superhero, beating other favorites like Spider-Man, the Thing, Deadpool, and Doctor Strange. The only person he beats in my personal ranking would be Batman, and I feel like Batman’s cheating a little by having been in my life pretty much since birth. I really only got into Daredevil a few years ago, but when I started looking into him, I ending up getting sucked down the rabbit-hole. I’ve now read pretty much ever Daredevil comic written, thanks in large part to the Marvel Unlimited app, which is basically Netflix for Marvel comics, and lets me read most everything they’ve published. I love the super weird campy Daredevil from the sixties, the dark gritty Frank Miller stuff, the loquacious and cinematic Brian Bendis run, and the awesome life-destroying Ed Brubaker run, and everything in between. The adventures of Matt Murdock are pretty much always going to deliver a great, enjoyable read.

But let me tell you, my favorite run of all is the newest run, which was written by Mark Waid and drawn by several artists including Chris Samnee and Marcos Martin, amongst others. It’s an amazing run that draws on every age of Daredevil, embracing the swashbuckling 60’s era, hand in hand with the darker more modern stuff. This run really gets to Daredevil’s core, explores what makes the character great, and brings new characters and situations to Matt’s life that will probably remain for the rest of his character’s history. It’s just about a perfect run, and by the end of it, you realize that everything was connected. Everything that happened to Matt Murdock ended up being organized by one man, all designed to break him. We of course don’t learn that until the end of the storyline, which wasn’t even the end of the run, but that’s not what we’re going to be talking about. I want to talk about Daredevil issue 25, quite possibly my favorite single issue of any comic book series ever. Hyperbole? Possibly. But it’s amazing. Read it, because this may seem like even more of a stream of nonsense without knowing the issue. 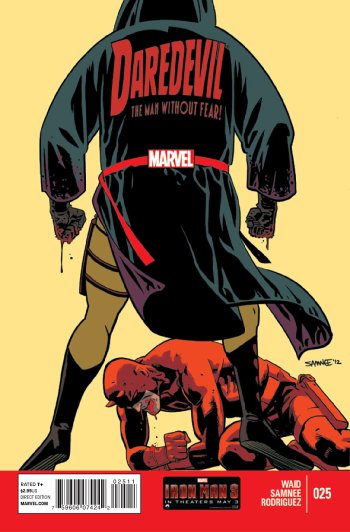 This issue was written by Mark Waid, and drawn by Chris Samnee, although on the title page they’re both listed as “Storyteller,” which I love. I think all comics should have that title.

Anyway, I feel like before I explain what makes this issue so great, I need to set up some story. Over the past twenty four issues to Daredevil, Matt has been trying to rebuild his life after all the crazy Shadowland nonsense, trying to reestablish himself as a lawyer in his real life, and a superhero in his private life. But he’s been running into some villains who all seem to be connected, but in a way that he’s unable to solve. Then, a bunch of homeless people show up on the streets of Manhattan, blind, and apparently possessing similar extra-sensory powers that Daredevil has. After dealing with that, his office is attacked by some dogs that are also blind and possessing super senses. Clearly someone has figured out how Daredevil got his powers, and has managed to recreate them. Oh, and Foggy has cancer and isn’t doing so hot. So Matt’s at Foggy’s side in the hospital, when a man comes up, saying he knows whose behind everything, and is willing to help Matt find him. Matt studies his heartbeat, finds that it’s steady, so he heads out with the man.

Of course, it’s a trap, and as soon as they get to a warehouse and Matt tells the guy he knows it’s a trap, the pacemaker that the man had installed to keep his heartbeat steady turns off, killing him. We then get a great example of how inventive the team on his book are with using Matt’s powers, giving us this great picture of Matt checking the surroundings for his attackers.

That’s pretty amazing. Now’s a good time to talk about Chris Samnee’s art. It’s amazing. I do love the Alex Maleev and Michael Lark art styles for Daredevil, but I think Samnee may be my favorite Daredevil artist. I do like the dark stuff, but I love Samnee’s new bright take on the character. It’s fun and pulpy instead of dark and grungy. I love it.

Anyway, even though he knows it’s a trap, Matt dives headfirst into the warehouse, eager to finally find out whose been messing with his life for the past few years. But as soon as he lands, he starts hearing someone whispering, telling him about the plan to recreate the chemicals that blinded Matt, and gave him his abilities. And as the man comes closer, Matt finds some familiar scents, the chemicals that blinded him, his fathers shaving cream, and the hand wraps that his father used to use when he boxed. It’s obvious that whoever this is, they know who Matt is, they know his secrets. The mysterious man is then revealed to be Ikari, Matt’s newest villain, clad in a costume that’s reminiscent of Matt’s great old yellow and red costume he had in the beginning.

It’s an amazing design. Then, after Matt gets cocky, telling Ikari he spots seven ways he’s vulnerable, Ikari begins the trend of having amazing lines by simply saying, “show me.” And then the fight begins. And that’s pretty much the rest of the issue. It’s a beautifully designed and drawn fight scene, full of inner monologue from Matt as he slowly realizes that he’s in over his head, and this new enemy knows far too much about him. They take the fight to the roofs of Manhattan as Matt scrambles to find a way to get the upper hand on Ikari. But try as he might, Matt just can’t best Ikari.

We then get a great flashback to Matt’s training with Stick as a kid, which was the first time this run even mentioned him. That’s one thing I thought was so great about this run, it stayed away from a lot of the tried and true parts of the Daredevil mythos, and did it’s own things. But the end Kingpin, Bullseye, and Stick all make appearances, but Waid does his own thing for most of the run, not relying on the established tricks.

Ikari and Matt continue to fight and struggle as Ikari continues to stop all of Matt’s tricks, even destroying his billy clubs, leaving him with only his skills as a fighter. But finally, after getting his arm gashed open and the threat of a concussion getting ready to make him black out, Matt pulls a Hail Mary, and heads to a sporting goods store in the hopes to overwhelm Ikari’s new-found radar senses. Matt knows that the cluttered store, mixed with the sprinkler system that he sets off will destroy Ikari’s radar sense, since Matt’s had years to hone his skills, and Ikari’s only had days. And sure enough, Ikari seems to hesitate in the powerful rain of the sprinkler, so Matt reaches for a basket of baseball bats to finish the fight when…

Oh man! OH MAN! That reveal literally had me drop my jaw, and I had to stop reading the issue for a while to get a hold of myself. It’s brilliant. You realize at the same time as Matt that Ikari isn’t blind, and in fact, there’s been nothing to make us even think he is. Yeah, the chemicals that gave Matt his powers blinded him, and the people that had clearly been used as a guinea pig were also blinded, but there was nothing before this scene that even gave the hint that Ikari was blind too. We just assume he is, and so does Matt, only to have the big reveal hit us as hard as it does Matt. We then get a heart-rendering scene where Ikari begins beating Matt to death, and he gets flashbacks to his father’s fights and his advice to Always Get Up. God I love Matt’s dad, and their relationship. But sadly, Matt just can’t get up. But, right before Ikari delivers the killing blow, he stops. He tells Matt that the man that’s behind everything gave him instructions not to kill him. Yet. He monologues to Matt about how he’s going to kill him. Maybe tomorrow, maybe in a week, maybe in ten minutes. Matt can run, but he’ll never escape. And that’s the end of the issue. It ends like that!

The rest of the story gets finished out in the next couple issues, and it’s a great ending. It may seem weird that this issue is my favorite of the run, since it doesn’t even wrap anything up, if anything it just throws another wrench in an already complicated plot. But oh man, I love it. The fight is amazing, the art is spectacular, and the design of the issue is perfect. We get a lot of great character work from Matt, a great new villain in Ikari, and a pretty spectacular twist. I love this issue, I love this run, and I love this character.

Seriously, go buy this issue, this volume, and the whole damn run. Mark Waid and Chris Samnee, you gentlemen are masters at your craft, and I salute you.

Tagged as: Back Issues, Daredevil, Marvel