The Traumatic World of Halloween

For a long time I felt like I wasn’t a fan of horror movies. I never really got the appeal, and actively avoided them, other than a few exceptions. But, as time has gone on, I’ve realized that there were more and more exceptions to that rule, until it dawned on me that there were more types of horror movies that I enjoyed than disliked, it’s just that when I was a kid, and honestly for most of my life, the dominate form of horror movies were the ones I don’t like. I never had any interest in the sort of jump-scare Japanese style horror like the Ring, I absolutely hate found-footage horror like the Blair Witch Project, and I have no interest whatsoever in “torture porn” like Human Centipede. And, for a substantial amount of my life, those types of films were really all that the horror genre were putting out, making me completely disinterested in the entire genre. As time has gone on I’ve realized that there was plenty of quality horror films in the history of American cinema, I just had to go out of my way to find them. And, through that exploration, I’ve found a lot to love about the world of horror. I know for a fact that the three types of movies I mentioned earlier aren’t my cup of tea, but I’ve attempted to broaden my horizons and find different subgenres of horror that might catch my attention. However, there’s another big subgenre of horror that I don’t connect to, and have assumed I never would. The slasher. There were obviously slasher movies in my lifetime, but the heyday of their reign was just a little before my time, and every single one I’ve ever seen has failed to impress me. They tend to be everything I hate about horror, full of gore and jump scares, making for movies that tend to be more startling than scary. But, I decided to do something a little out of character, and go check out the latest attempt to jump-start one of the slasher genre’s longest-running franchises. I went to see the new Halloween. And I really liked it!

Halloween, wisely, throws out every single other film in the Halloween franchise other than the original. It picks up forty years to the day to the events of the first film, and all begins when a pair of British investigative journalists arrive at the mental asylum that houses serial killer Michael Meyers to interview him for a podcast. They don’t get much from Meyers, and know that they’re running out of chances, because he’s being transferred to a much more severe facility. So, in a last ditch effort to get some information from Michael they decide to go visit his only surviving victim, Laurie Strode. And it doesn’t go well. Laurie has become incredibly paranoid in the forty years after the night Meyers killed three of her best friends, living in a fortified compound preparing night and day for Meyer’s eventual return. She has no interest in helping the journalists, and is busy anyway getting ready to go warn her family that Halloween is upon them and they need to be paranoid just like her. Laurie goes to talk to her estranged daughter Karen and her granddaughter Allyson, who at least tries to make a connection with her grandmother. Laurie insists that something bad is going to happen, but her family blow her off. And, she was right. Because while Michael is being transferred to his new facility he causes a bus crash, where he’s able to escape. He tracks down the journalists from the beginning of the film, murders them, takes back the mask he wore during his rampage, and heads back home.

The night of Halloween, Laurie is desperately trying to convince her family that Michael Meyers is free once again, and almost certainly coming to kill them all. Michael’s psychiatrist, Dr. Sartain, survives the bus-crash and starts working with Deputy Frank Hawkins, doing their best to track down Meyers. Laurie is able to get Karen and her husband to come with her to her compound for safety, but no one is able to get a hold of Allyson, because she’s busy having teenage drama with her boyfriend at a school dance. But, while the Strode family are dealing with the knowledge of the impending death coming their way, Michael Meyers is wandering the streets of Haddonfeld, killing a staggering amount of people, seemingly just for the fun of it. Deputy Hawkins is eventually able to find Allyson, and together with Dr. Sartain find Michael Meyers, hitting him with his cop car. But, Sartain then reveals himself to be a psychopath as well, killing Hawkins and saving Meyers, purposefully bringing Meyers to Laurie’s compound, wanting to see them fight each other. And Meyers thanks him by brutally killing his psychiatrist, adding to his body count. Meyers then assaults Laurie’s home, killing Karen’s husband quickly and then leading Laurie through a tense fight in her home. It eventually comes down to three generations of Strode women, fighting Michael Meyers, before trapping him in a secret cellar, then triggering a massive fire, presumably burning the psychopath to death and finally freeing themselves from the horror of Michael Meyers. 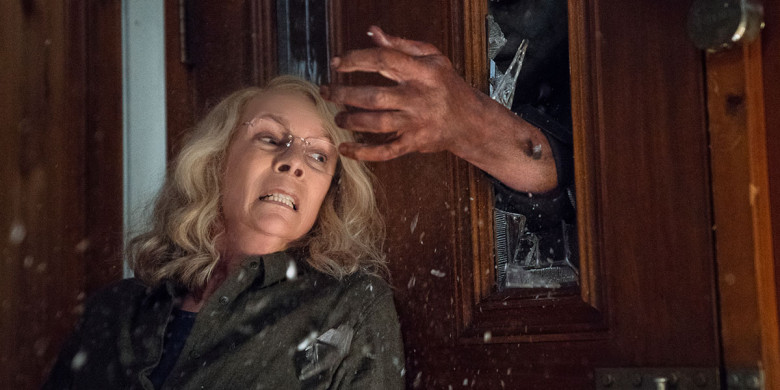 I wasn’t really sure what to expect going into this film. Like I said, I’ve never enjoyed slasher movies. I’ve tried a few from different franchises, and just never gotten the appeal. But, there was one big franchise I’d never even tried before. Halloween. I’d never seen a single Halloween movie, but when this film started getting made I had to admit that I was intrigued. And that’s completely thanks to director David Gordon Green. Now, if you aren’t familiar with Green and his work, I highly recommend looking at his filmography, because it’s insane. Green started his career making a string of critically acclaimed indie dramas, then did a string of stoner comedies, then back to dramas, and has recently been trying all sorts of stuff, to rather middling results. He has one of the strangest and most eclectic careers in Hollywood, and the idea that he wanted to take a stab at the Halloween franchise couldn’t help but be interesting. So, I watched John Carptenter’s Halloween just to get the slightest frame of reference and gave this film a shot. And I really liked it. It’s without a doubt the best slasher movies I’ve ever seen, and actually put some mood, tension, and depth into the genre, which I’ve by and large never seen before. There are still plenty of slasher elements in the film, gratuitous gore and jump scares, which I didn’t really appreciate. But, it also ended up being a genuinely creepy film, full of expertly crafted terror and suspense, held up by a string of legitimately great performances. The real standout is obviously Jamie Lee Curtis, giving her character of Laurie Strode an excellent new outing, filling her with depth and sadness. But really everyone in the film knocks this movie out of the park, giving us a horror film that also ends up feeling like a family drama.

Which is probably why David Gordon Green was the perfect director for this movie. When he was first announced, with a script co-penned by Danny McBride to boot, I know a lot of people were put off. Green has had an incredibly strange career, and taking a shot at the slasher genre seemed like just another strange turn. But, when you actually watch the movie, it ends up making a whole lot of sense. Because when you get right down to it, this film is about the vast rippling effects that a traumatic event can have on a person. This film takes out all the other strange elements of the Halloween franchise, just showing us what would actually happen to a person who went through the events of a slasher movie. Laurie Strode doesn’t become a badass warrior ready to kill more supervillains, she turns into a severely broken person who is never able to feel comfortable again, and who pushes absolutely everyone in her life away from her, in the fear that they too will become fodder for a serial killer. She raises Karen in the only way she can, and as a result gets her daughter taken away from her, creating a legacy of shame and resentment. Because Laurie is just trying her best. She went through true horror, and is completely shattered her. Shattered her in a way that ended up causing huge ramifications for her daughter and granddaughter’s lives. Because sometimes the real curse is being the only one left alive.