That Time the Silver Surfer Got Tricked Into Attacking Dracula

Well everyone, it’s that time again. Halloween is upon us, which means it’s time to take another look at the weird and wild world of Marvel’s Dracula. For the past two years I’ve rung in the most wonderful time of the year by telling you about two insane encounters that the Lord of Darkness has had with Doctor Strange, a pairing that you maybe wouldn’t exactly think of, but that ended up working out really well. Both of those stories were an absolute delight, and a great introduction to the world of Marvel’s Dracula. Who I love. Dracula, and vampires in general, aren’t really something that I care a whole lot about, but the version of Dracula that appeared in Marvel Comics in the seventies and eighties was a whole lot of fun, basically becoming a more supernatural version of Doctor Doom, a character who could just show up in any sort of story and cause a problem. And, after tackling the two big, famous stories of Dracula fighting against the Sorcerer Supreme, I decided to try something new this year. Because, much like Doctor Doom, Dracula was pitted against a whole litany of different Marvel superheroes over the years he was active in comics. Some of them make sense. Some of them don’t. And, continuing down the path of that second option, let’s talk about a time where Dracula had to deal with possibly his most unlikely foe ever. The Silver Surfer! We’re mixing our horror comics with our cosmic comics today, folks. Let’s see how that turns out!

Our story picks up where most Tomb of Dracula tales do, with Dracula running around feasting on random women in Boston. He does he best to feed on a woman he encounters on a misty night, but has to give up when a crowd of, presumably, drunken Bostonians chase him away. And, while all of this is going on, we see that a group of cultists, the Church of the Damned to be specific, are hanging out in their headquarters, plotting. The Church of the Damned have been working with Dracula for a while now, hoping that he could help them bring about a child who could help end the world. And, he’s getting close. He’s managed to impregnate a wife of his, and the cult, led by a man named Anton Lupeski, think that things have reached the point where having Dracula around is no longer necessary. In fact, it may be getting detrimental. So, Anton and a group of three other cultists agree that it’s time to do something about their Dracula problem. The quartet of cultists then head to a foreboding hillside where they begin an incantation to find someone who is the exact opposite of Dracula, and therefore has the potential to best him in combat. 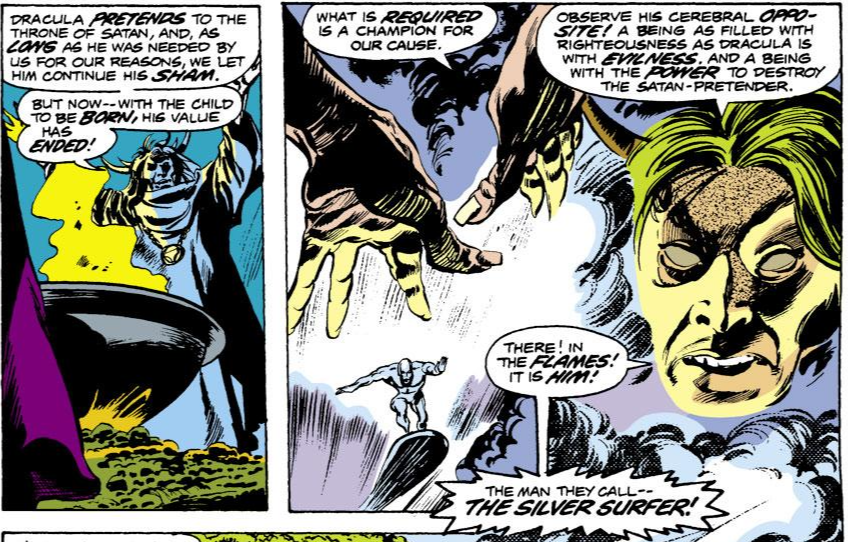 Yep, if the cultists are looking to defeat an age-old lord of darkness and evil it makes sense that they need someone full of power and goodness, which has given them the Silver Surfer, the nigh-omnipotent former herald of Galactus. And, as luck would have it, the Surfer is both free at the moment, and in a mood where he’s hoping to do some good. We check in on the Surfer, very far from Boston, lost in his own thoughts. He’s recently come back into contact with the love of his life, Shalla-Bal, only to have her ripped away from him once more, so he’s in the mood for some distraction. And, as he’s surfing around the skies of Earth, he encounters a group of humans who just start firing guns at him for seemingly no reason. The Silver Surfer doesn’t really understand why they’re being so aggressive to him, but he starts to fly towards them anyway, hoping to clear up any misunderstanding. And, as he starts to approach them, he’s hit by a powerful light and transported to Boston, in the clutches of the Church of the Damned.

The trip has taken a lot out of the Surfer, and he ends up collapsing in a heap in from of the cultists, giving them the chance to put a little information into the Surfer’s head. They send a torrent of images and feelings into the mind of the Silver Surfer, letting him know who and what Dracula is, and making him believe that Dracula is the greatest threat to mankind there is. They basically subject the Surfer to a slideshow of all of Dracula’s greatest crimes, while also pushing the idea that the right thing to do is for the Silver Surfer to fly around, find Dracula, and utterly destroy him. For the good of humanity. And, it works. The Church of the Damned slip away, and when the Surfer wakes up he finds himself completely obsessed with Dracula, and flies off to destroy the Lord of Darkness.

And while all of this is going on Dracula is hanging out in his home with the rest of the Church of the Damned, just lording over everyone. He and his wife, a woman named Domini, are sitting around getting gifts and promises of fealty from various humans. Which doesn’t really interest Dracula, all he cares about is his impending son, which has been prophesied to be a mighty warrior who will conquer the world. The couple then just sit in their throne room, staring at a massive painting of what their hypothetical son will look like when he’s a powerful grown man. But, as they stare at the portrait longingly, something unexpected happens.

The Silver Surfer comes flying into the room, phasing through the wall in a massive flash of light, and screaming that he’s here to destroy Dracula and everything he loves. Neither Dracula nor Domini have any idea what’s going on, but that moment of stunned confusion is brought to a furious conclusion when the Silver Surfer lobs a bolt of cosmic energy their way, smashing into a wall right next to Domini. And, while he is a terrible and cruel monster, Dracula doesn’t much appreciate to see some weird metallic stranger attempt to hurt his pregnant wife. So, Dracula does what anyone would do when facing an incredibly powerful cosmic being who has just startled his wife. He slaps the Silver Surfer right in the face.

And, just like that, the fight is on. Silver Surfer is pretty aghast to find that he almost hurt an innocent pregnant woman, but the programming that the Church of the Damned put in the Surfer’s head was too strong. He still must destroy Dracula, and the two agree to head outside, away from Domini, and beat the shit out of each other there. Like gentlemen. Dracula then transforms into a bat, and flies out into the Boston night, with the Surfer chasing him, blasting rays of Cosmic Power at him seemingly at random. And, getting caught up in the heat of battle and the evil influences of the Church of the Damned, the usually stoic and kind-hearted Surfer start screaming into the night that he’s going to destroy and kill Dracula.

That level of unhinged fury starts to worry Dracula, who decides to kick things up a notch. Dracula has some slight control over weather in Marvel comics, so he starts kicking up a veritable hurricane, hoping to catch the furious Silver Surfer off guard. And, it works. Surfer gets blown around quite a bit, and he ends up landing on the ground, trying to get his bearings while also dealing with a powerful confusion of why he’s this mad about a guy he’s never actually met before. But, before the Surfer can give his strange passion much thought, he’s attacked by Dracula’s next plan. A whole bunch of rats!

So, yeah, Dracula has apparently realized that he doesn’t have the ability to take down the Silver Surfer in a traditional manner, since the Surfer has such a vastly different level of power. And, to deal with that, Dracula has decided to try and best the Silver Surfer by hitting him with some psychological terror. He floods the Surfer wife waves of furious rats, and start flitting around the outskirts in a misty form, trying to mess with the Surfer’s head. Dracula then flies over to a nearby dam, and rips a chunk out of it, causing the Surfer to scramble to fix the hole, letting his innate desire to help innocents break through the programming of his Dracula hate.

The Silver Surfer’s mind is really starting to reel at this point, baffled at why he hates Dracula this much, and why he’s being drawn to kill this man he doesn’t know. Other than the fact that he’s a literal man-eating monster, but whatever. And, at that moment, the regular human characters of Tomb of Dracula end up attacking the Church of the Damned, causing them to break their concentration and end the spell over the Surfer’s mind. And, just like that, the Surfer realizes how insane he’s been acting. He flies back to Dracula and Domini’s home, and phases through the walls again. Dracula prepares to attack Surfer again, but the Surfer quickly explains that he has no qualms with them now. He doesn’t exactly understand why he hated Dracula so much just minutes ago, but he explains to them that he no longer wants them dead. And, with that, the Surfer flees from the castle to continue his search for meaning, leaving Dracula free to kill more and more people.

What this story doesn’t have in epic tales of magic, it more than makes up for in sheer insanity. I love those Doctor Strange stories that I’ve shared with you, and this story doesn’t really rise to the same levels. But, I’ve created a weird bar to pass with those stories, both of which end with Doctor Strange utterly annihilating Dracula, only for him to show up in future stories. There’s not cataclysmic destruction of Dracula in this comic, as funny as that would be to keep a running gag going, but I still love just how bizarre this story is. The Silver Surfer is a character that I enjoy quite a bit, and he’s probably one of the Marvel heroes that I would least imagine had a story featuring Dracula. The Marvel Universe is a vast one, with wildly different characters, but sometimes you get confronted by the fact that they’re all running around on the same planet, despite being radically different. Such as Dracula and the Silver Surfer, two tastes that shouldn’t go together, but end up becoming chocolate and peanut butter. The whole idea of the Silver Surfer being mind-controlled into hating Dracula is a little weird, what with Dracula being a legitimate threat to humanity, but whatever. The story still works really well. Because I’ll never tire of seeing Dracula running around, calling everyone who isn’t him a ‘fool’ and being so confident that he slaps the Silver Surfer multiple times.

Tomb of Dracula #50 “Where Soars the Silver Surfer!” was written by Marv Wolfman, penciled by Gene Colan, inked and colored by Tom Palmer, and lettered by John Costanza, 1976. 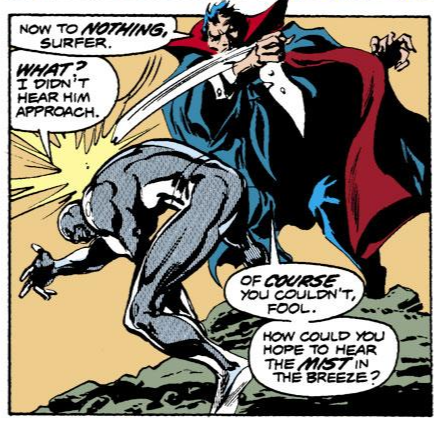