Wylding Hall and the Saving Gimmick 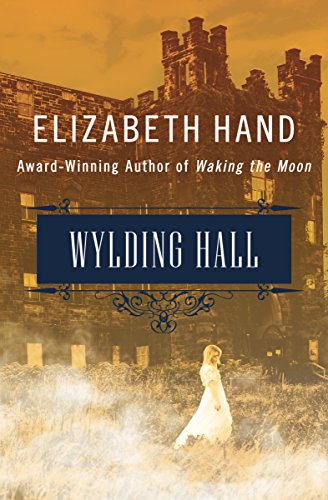 Have you ever read a novel that does something so strange that you kind of get revitalized about the whole art-form? It’s a very rare feeling, because if you’re someone who reads a lot of books, it can start to feel like there’s not much experimentation with the form. The traditional prose of a novel is pretty set in stone, and it really is a rare occurrence to come across a novel that tries to do something different to tell a story. A perfect example of this is one of my favorite novels of all time, Italo Calvino’s If On a Winter Night a Traveler. If you’re unfamiliar with this book, I highly recommend checking it out, especially if you know as little about it as possible. All I’ll say is this, it’s the only novel I’ve ever read that’s in second person. It’s a weird story that’s told in such a unique way that it remains indelibly marked in my brain. When I first read that book I realized that there’s all sorts of ways to tell stories, and we don’t necessarily need to be confined to the traditional prose structure. And, I’ve come across another novel that gives me that same feeling. I hard about this book when an author I enjoy listed some of his favorite horror and sci-fi stories of the past few years. I didn’t really know much about Elizabeth Hand’s Wylding Hall, but the recommendation was enough to get me to check it out sight unseen. And I’m so glad I did, because it’s a fascinating little bit of storytelling.

Wylding Hall is a story whose form may be more note-worthy than its plot, but it still has a pretty great story. It’s a tale about the members of a seminal British folk band from the early 1970’s called Windhollow Faire. After some buzz from a somewhat successful debut album, and the distracting suicide of their original backup vocalist, their manager decides to take them out of the regular world and put them in an idyllic countryside manor known as Wylding Hall to escape distractions and create their follow-up. The Hall itself is a very strange place, full of conflicting architecture and shrouded in mystery, but the band doesn’t really seem interested in all of that at first, instead choosing to just get along and play their music while partying as much as possible. There’s a lot of drama involved in the band, from the mysterious and aloof lead singer, the closeted drummer, to the newly invited backup singer and only woman in the band. But, the more that time they spend in Wylding Hall, the more things start to seem wrong.

They find a strange library that occasionally can’t be found again. They come across secret passages that go nowhere. They find a room full of bird skeletons. The townsfolk in the nearby pub want nothing to do with the Hall, and keep mum about its past. And, they start to feel like there’s some sort of entity in the Hall. During a particular night of partying several members hear a spectral voice singing with them, and more and more it appears that the Hall is haunted. But then we come to the real sticking point of the story, and the reason it’s being told. Because, after recording some demos of their songs something bizarre happens. A strange woman that no one in the band knows approaches the band at the local pub, and seems to draw in the lead singer immediately. And, after the two spend a night together, the singer was never seen again. The band had to release the demos instead of a real album, and they broke up, because their intrepid leader never returned. And, not only that, all sings point to something sinister happening in the Hall, and surrounding this mysterious girl. It’s a great reveal, and I don’t want to spoil it all here, so do yourself a favor and give this book a read.

But, that’s not the full story. Because this wasn’t just a straight-forward novel. It was structured like a documentary, something I’ve never seen before. We’re introduced to all of our characters, and the book is told in a series of monologues, all shown as interviews. These are versions of our characters who have spent decades pondering this weird time of their life, and the disappearance of their friend and band-mate. They tell a story, but because it’s presented as a story that we’re already familiar with, Elizabeth Hand was able to thread plenty of foreshadowing in in brilliant ways. The members of the band would casually mention unnerving things, letting you know that this story was going to go in a strange direction, while letting it all unfold perfectly. We know that the lead singer mysteriously vanished, and over the course of the novel that mystery is slowly told, all through these first-hand accounts. I’ve never seen a novel written like this, and I found myself loving it. It’s a special kind of story, and I feel like if I encountered novels written in this style all the time it would get a little tiring. But, I loved this book and it’s style. Honestly, the kind of rote ghost story that the novel tells isn’t anything too special. It’s a good story, it’s just a little typical of the genre. But, taking a standard story and telling it in such a unique way really helped this novel. Gimmicks can often feel tiring, but in this case it made the story for me. I highly recommend this book, and I would be fascinated to see more stories told in this style. Because it’s not every day you come across a story you’ve never seen before.