Well we’ve made it through another week here on Lifetime of Simpsons, and it looks like we’re sending the week off with a super weird little triptych episode. And this time it’s all about stories of revenge! Seems like a weird target to hit, but whatever, at least we get a frame story for the three vignettes this time. Things start off with the Simpsons driving on the highway when they get cut off by the Rich Texan, which causes Homer to swear revenge. He starts driving after the Texan, planning to attack him. But Marge doesn’t really want to witness a crime, so she tries to calm Homer down by telling him stories of when revenge wasn’t the answer. And first up it’s her turn.

The Count of Monte Fatso 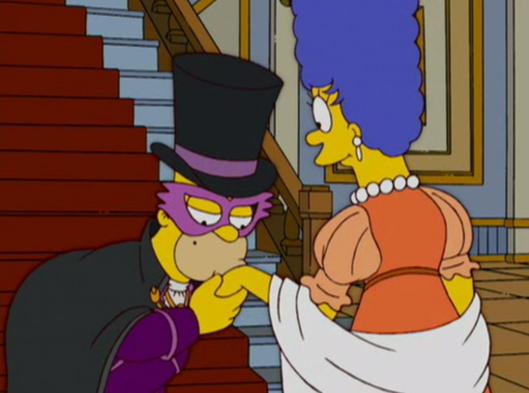 Our first segment is basically just a retelling of the Count of Monte Cristo, but incredibly sped up. We see the Simpsons living in mid-1800s France. They’re enjoying their lives, and earning the ire of Moe, the local creep who stalks the Simpsons and hates Homer for having such a good life. So Moe decides to frame Homer for treason, and gets him arrested by Chief Wiggum. Homer’s then put on trial, and Moe’s testimony is enough to get Homer convicted, and sent to an island prison for a life sentence. Homer then gets the pleasure of being tortured by Lenny and Carl, and learning that Marge has now married Moe, thus making his life even worse than it was before.

However, Homer’s life has a turning point when one day he realizes that he’s had a cell-mate the entire time, Mr. Burns. Burns reveals that he’s spend his whole life in the prison, and has built an escape tunnel, but is now too old and feeble to use it. So he lets Homer escape with the tunnel, and gives him the location of an island full of treasure. Homer then escapes, gets to the island, and becomes rich beyond his wildest dreams. We then cut to several years later, and Homer has made himself into the mysterious Count of Monte Cristo, and he’s invited most of Paris to a big party at his mansion, including Marge and Moe. And when everyone gets to the mansion, Homer reveals his identity and puts Moe through a Rube Goldberg machine of revenge and torment, ending with his death. At which point Marge freaks the hell out, because she was married to Moe for years and actually loved him at that point, and Homer just murdered him. So Homer spent too much time plotting revenge and ended up losing everything that really mattered to him. But this doesn’t really bother the real Homer, who wasn’t paying attention, and who continues to attack the Rich Texan’s car. Which means it’s Lisa’s turn.

Revenge of the Geeks 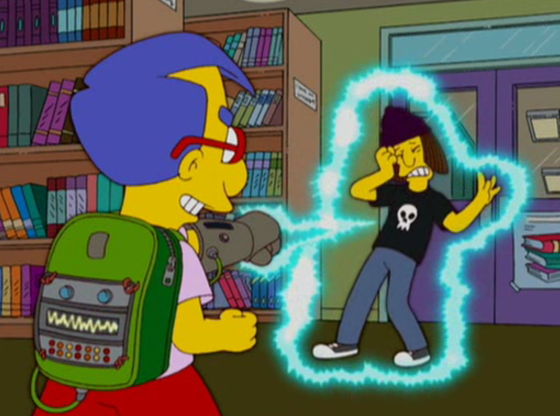 Lisa’s story starts off with Milhouse, Martin, and a few other geeks at Springfield Elementary being picked on the Jimbo, Dolph, and Kearney. It’s pretty typical stuff, but apparently this was a bridge too far, because the geeks decide to get some revenge. That night they all meet at the School and get to work creating a device that looks like a Nintendo Power Glove, and that has magical powers that can bully people. They then decide that Milhouse will be their leader, and they give him the glove, leading us to the next day at school when Martin barges into the boy’s room that the bullies hang out in. Martin leads the bullies on a chase until they end up in the library, where Milhouse activates the glove, and it starts beating up the bullies, defeating them soundly, and putting the geeks at the top of the food chain.

Which turns out to be a bad call, because now that the bullies are vanquished, Milhouse decides that he’s the top dog, and he quickly goes mad with power. Milhouse starts beating up the other geeks with the magic glove, trying to impress Lisa and show her that he’s the toughest person in school now. And this proves to be a slippery slope, because Milhouse just starts attacking everyone who ever slighted him in any way, becoming a power mad despot. Until the only person left is Lisa, and Milhouse realizes he can’t bring himself to bully her. At which point he takes off the glove, and Nelson gets it, starting a new reign of terror. Unfortunately, this story does nothing to convince Homer to stop stalking the Texan. They end up cornering him at some scenic overlook, and it’s up to Bart to tell one last story to get his father to regain sanity.

Out final story of the episode is a fun and weird little Batman pastiche that puts Bart in the Bruce Wayne role. The segment takes place in the 1940s of Gotham City, and we see Bart, Marge, and Homer leave the opera one night, and head down good old Crime Alley. Almost immediately Snake jumps out of the shadows, complete with a tattoo of a snake on his face, and he kills Homer and Marge, leaving Bart behind. Bart then swears to become a force of good and, with the help of Grandpa, he devises a crime-fighting alter-ego, Bartman! And after a training montage using old-timey exercise techniques, he’s ready to fight crime.

Bartman then begins wandering the streets of Gotham, killing every criminal he comes across while hoping that they have the snake tattoo on their face. We then get a fun montage of random Springfield citizens being Batman villains, all leading up to the reveal that there’s a new villain called the Serpent in town. Bart then tracks the Serpent down to a museum where he’s pulling a jewel heist. Bart fights the Serpent, learns that he’s actually the man who killed his parents, and then promptly kills him. However, reporter Lisa comes to talk to him, and explains that even though he killed the man responsible for his parent’s death, it didn’t bring them back. But that’s okay, because he’s still rich! So the moral of the story is that revenge is great. But the story didn’t really matter, because we see that Homer has patched things up with the Texan, and they’re just hanging out, looking at the stars and being peaceful. The episode then ends with an incredibly weird crawl that lists random characters who died in the Star Wars films. I really have no idea why.

I’m not really sure why the last couple of seasons have been so fixated on doing these triptych episodes, but they’ve often been pretty lackluster. And the premises are getting more and more strained. I mean, at least the topic of “Revenge” is better suited that “Stories on Boats” which was the last one we got. This one was okay, but not really that great of an episode, to me. I’m a big fan of the Count of Monte Cristo, but this vignette is so truncated and condensed that it ruins it. I feel like an entire episode devoted to parodying that story could have worked, but this was just too rushed. The geek story was also not really working for me, and I think it was just too thin a premise. It just felt so stretched out, like they were padding it with more and more gags of what the Power Glove could do, because there was no story to tell. However, that last segment is a whole lot of fun, even though, as Bart mentions, it would have worked better as a Treehouse of Horror segment. I loved seeing all the crazy villains and the weird 1940s aesthetic, and it made for a fun little story. But one segment isn’t enough to save two lazy ones.

Take Away: Don’t spend your life focused on getting revenge, don’t trust anyone who is put in a position of power, and don’t worry about your parent’s death and just enjoy being a superhero!

“Revenge is a Dish Best Served Three Times” was written by Joel H Cohen and directed by Michael Polcino, 2007.

Tagged as: 2007, Lifetime of Simpsons, Revenge is a Dish Best Served Three Times, Season 18, the Simpsons