What better way to end the week than an incredibly odd and lackluster triptych episode? I don’t know how we got so lucky for Season Seventeen to have not one, but two bad episodes that uses the Treehouse of Horror format, but here we are. And this time all the stories are about life on the sea! We actually get a frame story in this episode, in that the family are waiting forever for their food at the Frying Dutchman, and are passing time telling each other stories about ships. Let’s roll with it. 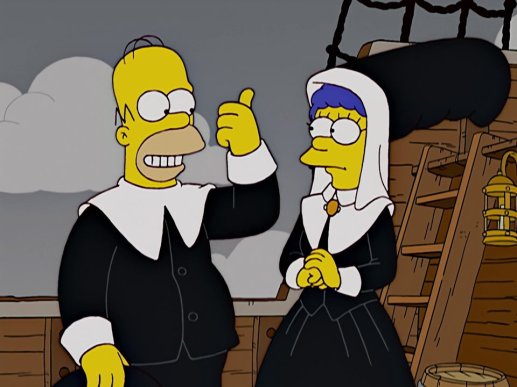 Our first story, which is told by Lisa, is all about the voyage that the Pilgrims took aboard the Mayflower headed for New England. We get to follow Marge, a widow, the children as they get aboard the ship and head to the New World. Meanwhile, Homer hides aboard the ship, running from the police. He pretends to be a Puritan, and gets to join them on the voyage across the sea, while immediately making moves on Marge. Which is going to be hard since Marge is technically engaged to Moe, who is a total creep. The fact that Homer hates the Puritans and their way of life doesn’t help things either. He’s constantly running into issues with their restrictive rules made by their leader, Ned. But Homer’s able to ignore those issues and continues to flirt with Marge, even proving to be a potentially good father by the way that he strangles Bart.

And that bit of attention from Marge really starts to worry Moe. He’s concerned that Marge is going to fall for Homer and leave him, so he comes up with a ridiculous plan to get Homer taken out of the way. Apparently the ship is full of barrels of beer that they were planning on giving to the Natives to get them drunk and take their land, so Moe shows the barrels to Homer, and gets him drunk. Which couldn’t come at a worse time, because while Homer gets the rest of the ship drunk, they hit a massive storm. They try and punish Homer by locking him up in stocks, however they quickly realize that they’re screwed in the storm, because apparently no one knows how to handle a ship in bad conditions. So Homer decides to do the valiant thing, and offers to help steer them to the New World while everyone else stays below deck in safety. And, against logic, Homer succeeds and gets them to New England, where he marries Marge and the Pilgrims wipe out the Native populations.

Mutiny on the Bounty

Our second story, which is told by Bart, is the weakest of the three, but the episode calls that fact out, so I guess that’s something. It’s basically just a retelling of the Mutiny on the Bounty story, but with the boys of Springfield Elementary as the crew, and Principal Skinner as the captain. We see Skinner being a compete asshole to the children, running the ship like a dictator, while the kids quickly decide that they should mutiny and kick Skinner off the ship. Willie is also on the ship, and he tries to warn Skinner that things are getting dire, and that he should ease up on the kids. Skinner more or less ignores that advice, but they do decide to take a little vacation.

The ship lands on Tahiti where they’re treated to a ridiculous all-inclusive resort headed by King Homer and Queen Marge, while the boys enjoy island life. They basically do stereotypical luau functions, and have their fill of exotic foods and drink. However, this trip proves to be their undoing, because when they get back on the ship the boys quickly decide that they don’t want to be working for Skinner anymore, ad that they were much happier on Tahiti. So they decide and go through with their mutiny. So the boys kick Skinner and Willie off the boat, and make Bart the new captain since he says he’ll take them back to Tahiti. But for some reason they also get rid of the ship’s steering wheel, so they just get lost and end up crashing into the South Pole, where they die. Bummer!

Our last story is certainly the weirdest of the batch, and also the one I enjoyed the most. It’s Homer’s story, and it’s just the Poseidon Adventure, but with Springfield citizens put in to the silly seventies setting. It’s New Years Eve upon a ship called the Poseidon, and the Simpsons are the ships band, helping everyone ring in the New Year. We also get to see the motley crew of random people sitting at their table during dinner, who are the people that will be important. Like Comic Book Guy and the Elderly Jewish Couple.

And, just like the movie, disaster strikes when a massive wave knocks over the ship, and kills most of the people in the ballroom. But the survivors band together, and decide that they need to get to the hull of the ship, which is now the top. Everyone begins traveling through the ship as people slowly begin getting picked off, mainly by stupid reasons. Such as Lenny just not wanting to climb a ladder, and dropping himself to his death. But we also get to see Comic Book Guy sacrifice himself by swimming through a flooded section so that the other can survive. That’s heroic. And, in the end, they’re able to get to the hull just as emergency rescue people arrive and free them. And just as they’re being rescued they run into the ghost ship of the Bounty, where the boys are still trying to find their way to Tahiti.

I’m not sure why they thought we needed this episode, or why they included three different episodes with this format in Season Seventeen, but at least this one is better than that terrible Christmas one from earlier. Not that that’s a high bar to hurdle. I just found this episode to be really random. Sea stories? Really? That’s such an odd premise to go with, and they were clearly stretching the conceit of the episode by that last one by including the Poseidon Adventure. It’s just a weird episode full of lackluster jokes, and there’s really nothing that stands out about it. The first story is really boring, and mainly just Homer making fun of religious people. The second story is dumb and fun, with the boys hating Skinner, but there’s really not much too it. And despite how truncated and quick the Poseidon Adventure segment is, it’s at least got some funny gags. Which is all it really is good for. I don’t know, this one just didn’t work for me that well. Fingers crossed that we get something fun next week!

Take Away: Don’t vacation with Puritans, don’t staff a ship with children, and don’t go on drunken cruises in the 70s.

“The Wettest Stories Ever Told” was written by Jeff Westbrook and directed by Mike B Anderson, 2006.

Tagged as: 2006, Lifetime of Simpsons, Season 17, the Simpsons, The Wettest Stories Ever Told