Hey folks, were stuck in another pretty lackluster week here on Lifetime of Simpsons, and while I wouldn’t go so far as to say that this is a good episode, it at least gets bonus points for being so weird. We basically get a vacation episode spliced in with a really weird discussion of outsourcing. Fun times!

The episode starts off with all of the workers of the Nuclear Plant hanging out in an auditorium for some sort of special movie that Mr. Burns wants them to watch. Which doesn’t seem to be raising red flags for anyone, which is odd. Especially because the movie ends up being some weird little piece of propaganda about how great outsourcing is, and how it gives American workers the much needed break they deserve while other countries take their jobs.

And, in case you couldn’t have guessed, the reson that Burns wants them to watch this is because he’s planning on moving the Plant to India. Now, I don’t know much or anything about power plants, but can you really outsource energy like this? Like, can you have a power plant in another country and just pump it’s output to a different part of the planet? Eh, whatever, it’s what Burns is doing, and since this show is called the Simpsons we know that Homer is going to go to India. Which is accomplished by having Mr. Burns huck a bouquet into the crowd, letting the person who caught it keep their job.

But before we see how Homer explains to his family that he’s moving to India, we get introduced to the absolutely insane B-Plot for this episode. It’s oddly enough a Patty and Selma plot, and begins with them holding some sort of incredibly sad little MacGyver convention that’s basically just them. That is until Richard Dean Anderson shows up, by accident, and absolutely crushes their dreams by telling them that MacGyver is stupid and not worth their time. So, obviously, they kidnap him and bring him back to their apartment to be held captive in their creepy MacGyver shrine. 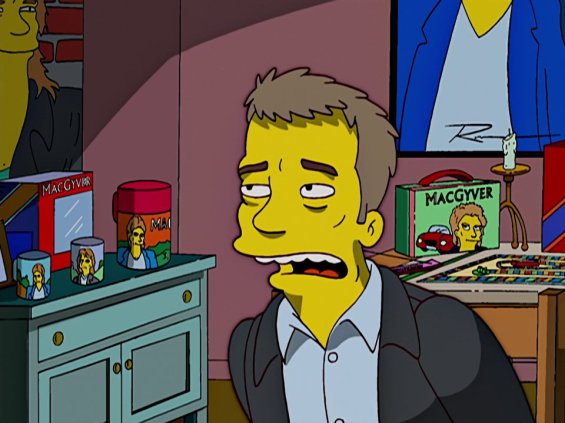 Enough of that for a while though, let’s get back to Homer. The family are less than thrilled that Homer is moving across the globe, but they seem to be supporting him, because they all seem pretty down with it. Marge even gives Homer some book about management skills, hoping that that will inspire him to be a good boss. But, not shockingly, Homer doesn’t read the book on his massive flight, and instead arrives on the subcontinent unprepared, and unaware of where India actually was.

Homer’s a little overwhelmed with the massive culture shock of moving to India, and calls home for some advice and guidance from Lisa, who gives him a basic less on Indian culture. And he also gets a little help from Apu’s cousin Kavi who shows him around Bangalore and gets him settled in. Which is just in time for Homer to go to the new Plant, and meet with his workers. And, because he obviously didn’t prepare anything, Homer just starts reading random passages from the book Marge gave him. And since the workers just want to be done with the meeting, they applaud. Homer’s a great manager!

Hey, let’s check in with Patty and Selma. Things are getting weird. Because one day while Patty and Selma are at work Richard Dean Anderson suddenly comes strolling in, having escaped their creepy prison. And the weird thing is that he isn’t there to have them arrested. He actually had a great time escaping their trap, and actually wants them to chain him up again so that he can escape again. And this continues to get weirder and weirder until Patty and Selma decide they can’t take it anymore, and they show him a slide show of their boring vacations until he gets so creeped out that he flees and leaves them alone.

Meanwhile, the new Plant is doing fantastic. They’re producing far more energy than that old Plant, and it seems to be a rousing success. Including Homer’s managerial skills. Mr. Burns even decides that things are good enough for him and Smithers to leave, giving Homer absolute power. Which is a bad call. Especially when one of the workers explains to Homer that Hinduism features several different gods, which makes Homer decide that he must be a god too. 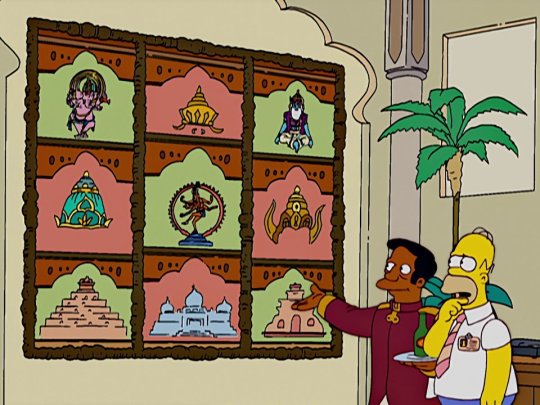 And from there, things quickly escalate into madness. Homer begins acting like a god and dressing like Mola Ram from Temple of Doom, and even summons Lenny and Carl to Bangalore to be his priests. Which is when Mr. Burns decides to intervene, and the episode suddenly becomes Apocalypse Now, with the Simpsons traveling up-river to the new Plant with Mr. Burns to help him depose the power-mad Homer.

And when they get to the Plant they realize that things are even worse off than they had imagined. Because the workers are all dressing like Homer, and seem to be actually worshiping him. The family tries to talk some sense into Homer, but that doesn’t seem to be working, so instead they try to get the workers to realize their error. And, shockingly, they don’t consider Homer a god. Instead, they’re worshiping him because he’s taught them about such concepts as overtime, medical plans, and all sorts of other benefits.

He’s completely changed their work ethic, and they love him for it, especially because he’s given them contracts that ensure all of these perks. Which officially makes this no longer a profitable venture for Mr. Burns, so he decides to just move the Plant back and return everything to normal. And, since this is an American story that takes place in India, they have to end with a big Bollywood dance number, because that’s all this country knows about Indian culture.

This was probably the strongest episode of the week, but it still wasn’t anything particularly special. There are certainly some interesting concepts in the episode, but they just kind of fall flat for me. I think the biggest issue is honestly the weird Apocalypse Now stuff. Because everything before that is pretty interesting. I like the idea of tackling the topic of outsourcing, and it’s perfect for Mr. Burns to be the one to send a company overseas. There’s even some biting satire about America’s love of outsourcing. I’m even pleasantly surprised that the episode isn’t too weird about the Indian culture. I could easily have seen this episode completely revolving around Homer making fun of Indian culture, which would have been a real bummer. But instead they went the weird god route, which was just out of left field and left me cold. I do like that Homer gives the Indian workers some good old fashioned American entitlement, but in general the episode just didn’t quite do it for me.

Take Away: Outsourcing is a really complicated issue, and maybe shouldn’t be handed so flippantly.

“Kiss Kiss Bangalore” was written by Dan Castellaneta and Dec Lacusta and directed by Mark Kirkland, 2006.