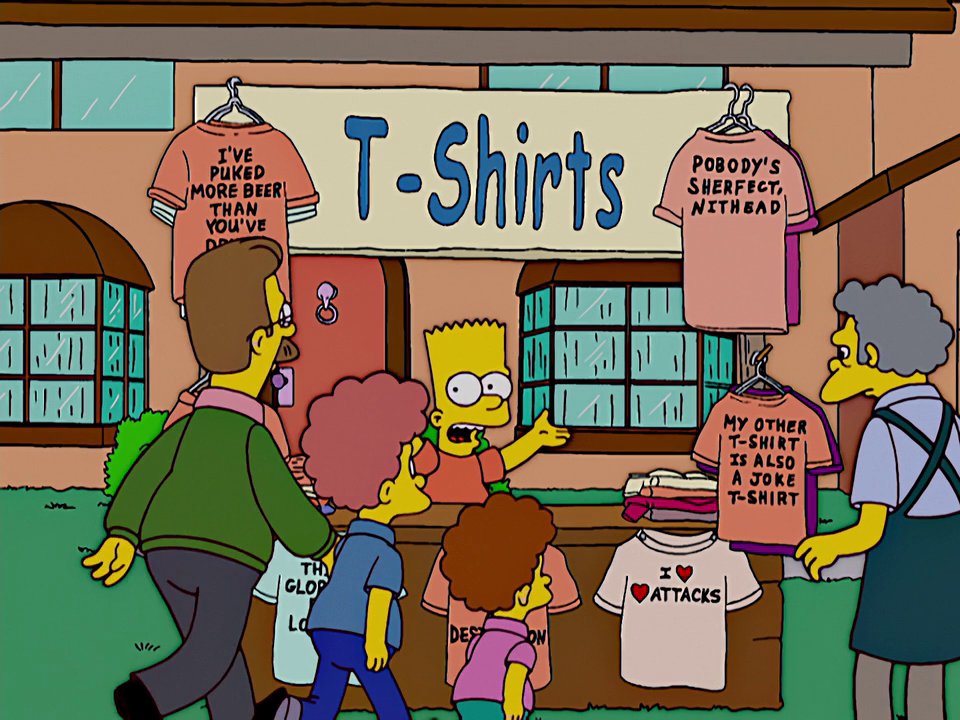 Howdy folks and welcome back to another week of Simpsons episodes. And it’s a pretty damned lackluster week! I don’t think I was overly impressed with any of the episodes that I ended up watching this week, and while none of them were particularly horrible, they were all just kind of nothing. And today may be the most nothing of them all. Even with notes I could barely remember this one just two days after watching it. Let’s do this thing!

The episode starts off in one of those weird ways where it seems like they were needing to stretch out the runtime by just adding a bunch of disjointed gags together. We start off with Homer coming home from work and going in through the back door for some reason, which is where he see Lisa and Janey playing patty-cake and almost swearing, which causes him to fait. But that’s not important, what’s important is that Bart is in the treehouse and firing spitballs at them like a machine gun.

Lisa runs from the spitballs until she gets a couple to the face, and gets upset when she sees blood on one. But it’s not hers, it’s Bart. He apparently has a loose tooth, and since it’s his last baby tooth he decides that he’s owed a huge payout. He starts messing with the tooth, hoping that it’ll fall out, and things are sped up when Marge is trying to open a kitchen drawer and ends up elbowing him in the face, knocking the tooth out. But who cares, he has the tooth!

So Bart goes and puts the tooth under his pillow, eagerly anticipating a hell of a payout. Unfortunately when he wakes up he finds that the Tooth Fairy has screwed him over and given a donation in his name to the United Way instead of giving him a quarter or whatever. Bart is furious at this development, and goes to the kitchen to yell about it with his parents. They respond by telling Bart that he’s a big-boy now and should start growing up.

This quickly causes Bart to have a sort of mid-life crisis where he becomes incredibly depressed that he’s no longer a kid. He goes to a grocery store to try a ride a little car, but gets bored, and even has a depressing moment when playing with his toys when they stop having an adventure and start talking about liability insurance. And that little lack of imagination is enough for Bart to give up on his life, pack up all of his toys and childish things, and give them a Viking funeral at a local lake. 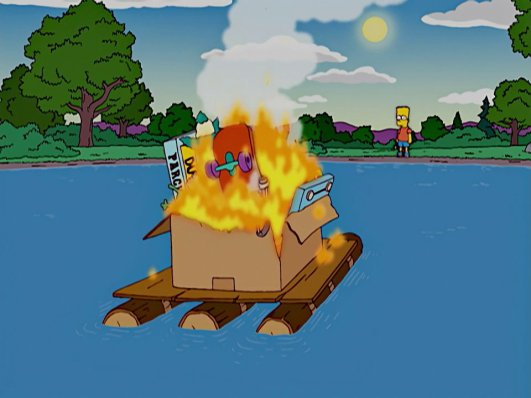 That shockingly doesn’t fix Bart’s depression though, which keeps going. Lisa notices the sadness and decides to recommend that he start writing something to help process his feelings. But Bart doesn’t like the idea of writing books or poems, so he decides to start writing obnoxious slogans and writing them on his t-shirt. Close enough I suppose. Bart writes a shirt that says “Adults Suck, and Then You Are One,” and the kids at the Elementary School freaking love it.

The kids start loving the shirts so much that Bart begins selling them. He sets up a kiosk on his front lawn and is quickly selling out of his products. Until Chief Wiggum shows up and takes all the shirts because Bart couldn’t pay protection money. But Bart’s gotten the entrepreneurial spirit, and he decides that he should start trying to sell his shirts legit, in stores. Which means that he has to head to a Springfield Novelty Expo and try to sell his shirts to a vendor.

Being a random ten year-old with a box of shirts doesn’t really make a mark on the professional crap-sellers though, and Bart’s kiosk ends up being destroyed by Krusty’s larger one, and he leaves a failure. But as he’s leaving he almost gets hit by a car, and ends up striking up conversation with the driver. He ends up being Goose Gladwell, a weird Willy Wonka parody who owns a chain of joke shops. And he loves the shirts. So much that he agrees to start selling them in his stores.

And just like a the Elementary School, people really start loving the shirts, which cause Bart and Goose to start raking in money. And that economic influx ends up being a good thing, because when Homer wears one of Bart’s shirts to work while napping, he gets fired. But it’s not a huge problem, because Bart is apparently now making enough to become the family’s primary bread-winner. Bart starts taking care of the family and giving Homer an allowance at this point, which surely isn’t going to lead to calamity.

Just kidding, things get awkward fast. Homer quickly begins relying completely on Bart, and it starts to bug him. He watches a natures documentary about how older alpha-lions will be deposed by younger more virile males. At which point the old lions either have to hang out with the really old lions, or bond with the young girls. And since Homer doesn’t want to start hanging out with Grandpa, he decides to start spending all of his time playing with Lisa.

Homer and Lisa start having great times together, and Lisa even shows him her diorama for the school science fair about nuclear power. However, right after she’s done showing it to Homer, Martin shows up with his project, a fully functional robot, and she realizes that her project is doomed. And because Homer now wants to take care of Lisa and be a great dad, he decides he should help her. Which obviously means he’s going to go online, find the instructions for making a nuclear reactor, stealing plutonium from the Plant, and making it in the basement.

So Homer starts working on the reactor, and shockingly makes it functional. Which obviously terrified Lisa, who gets Marge to tell Homer to get rid of it. So Homer heads to the dump to get rid of the reactor, and ends up running into Bart. Things aren’t going well for Bart. Goose sold the shirts to the Disney Store, and is screwing Bart out of the partnership, leaving him with nothing. So, logically, Homer decides to bring the reactor into Goose’s store and threaten to eradicate the town unless Goose gives Bart the money he’s owed. And since Goose isn’t a goddamn lunatic, he agrees, gives Bart the money, and Homer and Bart leave, triumphant, to get rid of their nuclear bomb.

There are some interesting ideas in this episode, but it just generally didn’t do much for me. I feel like several different episodes could have been made out of some of these premises if they’d just had more time to breathe. Bart having a mid-life crisis because he’s realized that he’s no longer a kid is a great idea, but it’s basically just for the first act. Likewise, the idea of Bart becoming the breadwinner could have been really cool, but they stop focusing on that so quickly to get to the insane ‘Homer builds a nuclear reactor in his basement’ plot, which didn’t really work with me. Plus this episode ends with Homer threatening the destruction of the entire town over like $500. That’s odd.

Take Away: Growing up is hard as hell, and writing is a great way to deal with the complex emotions that come with that.

“Fat Man and Little Boy” was written by Joel H Cohen and directed by Mike B Anderson, 2004.

Tagged as: 2004, Fat Man and Little Boy, Lifetime of Simpsons, Season 16, the Simpsons