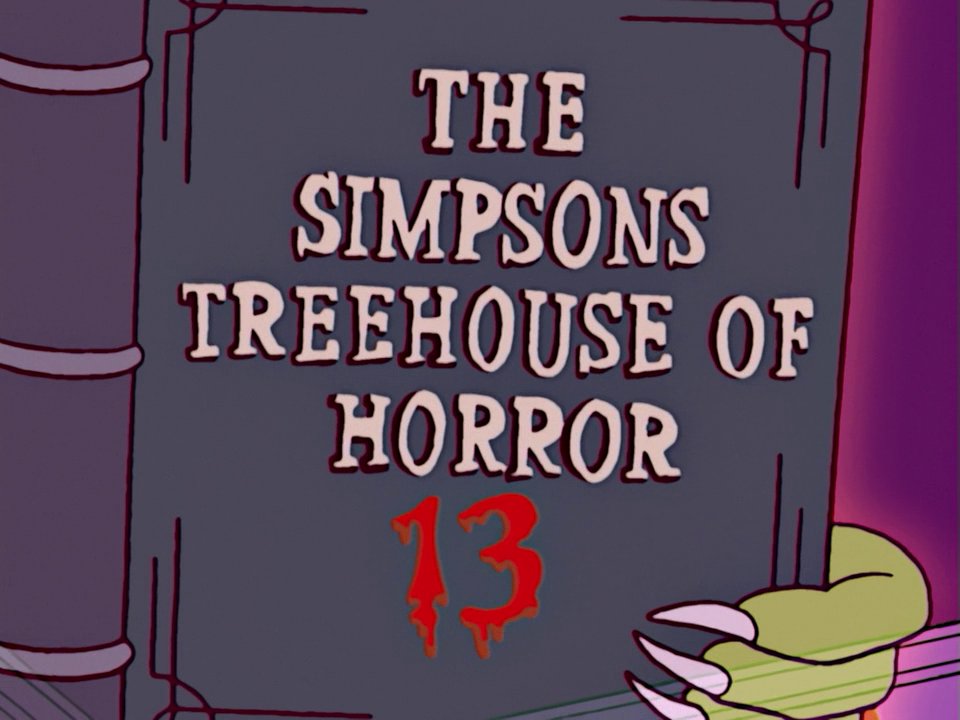 Welcome to Season Fourteen everyone! And you know what that means, it’s time for some Halloween goodness! You have to love Treehouse of Horror episodes, and this is a pretty fun one. Plus, they come so close to having a wraparound plot, which kind of irritates me because if they had put just a bit more work in on it, it would have worked. The episode opens up with the Simpsons hosting a séance with Ned to speak to the ghost of Maude. And shockingly, a ghost does show up. And ghost Maude is not happy. She becomes a giant demon and starts reading from a book, telling them scary stories. Sadly we don’t see her again, but I guess we can pretend that all these stories are being told by ghost Maude.

Send in the Clones 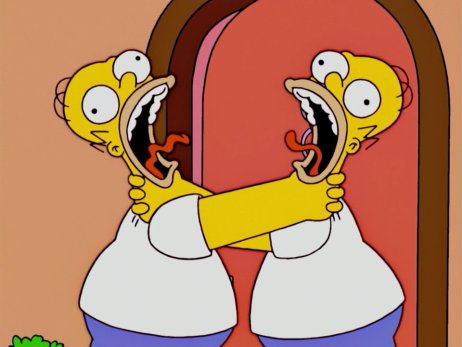 Our first segment starts off with Homer getting ready to lay down in his hammock and drink for the rest of the day. But Marge harshes his buzz when she tells him he has chores to do. Homer refuses to do said chores, until his trusty hammock breaks. Luckily, the door to door hammock salesman is coming by, so he just runs out and buys one, ignoring the man’s warning that the one he chose was cursed. So Homer sets it up, and hops in to rest. But he jumped in too fast, and he ends up spinning around in the hammock. And when he’s done spinning, he’s shocked to find that a second Homer is now sitting with him. The hammock can makes clones that are identical to Homer, except they lack a bellybutton.

So Homer does the logical thing and starts making the clone do his chores while he rests. Until the clone is electrocuted and dies. Which means they need more clones! Homer starts cloning himself at a rapid pace, scrounging up an army of clones who begin doing all this dirty work. They do his chores, shop with Marge, talk to Grandpa, and play with the kids. But disaster strikes when one of the clones accidentally kills Ned, and Homer realizes he needs to get rid of them. So he piles them all into a truck, drives them to the middle of nowhere, shoots some who remember how to get home, and abandons them. With the magic hammock. Which results in a flood of angry clones, including some broken ones like an extra-fat Homer, an original design one, and Peter Griffin. The wave of clones then begin eating all the food in the city like a plague of locusts, that results in the Simpsons being invited to a military meeting to discuss how to kill the Homers. And Lisa saves the day by suggesting an armada of helicopters with giant donuts suspended from them that will lure the Homers to a giant cliff where they’ll all die. And it worked! Oh, except for the fact that the real Homer died too, and now Marge is stuck with a clone. But he gives a mean backrub, so it’s all good.

The Fright to Creep and Scare Harms

That moronically titled segment begins with Bart and Lisa burying a recently dead goldfish in a pet cemetery. And on their way out they stop by the real cemetery, and Lisa finds a headstone for a young man named William who left an epitaph dreaming about a world without guns. And that statement moves Lisa enough that she starts up a movement to ban firearms in Springfield. And shockingly, the population likes it. The proposition is passed and everyone in town starts turning their guns in for money, becoming a more peaceful and defenseless society. All the guns in Springfield are then smelted down and turned into playground equipment.

And once the town is out of guns, the real insanity begins. Turns out that that William guy was Billy the Kid, and now that the town doesn’t have guns he comes back as a zombie, and decides to take over the town. And he’s not allowed, he has Frank and Jesse James, the Sundance Kid, and Kaiser Wilhelm with him. The zombie cowboys then quickly take over the town, running it into the ground and turning it into the Old West. Luckily though Professor Frink has built a time machine, and gives it to Homer, who blips out of time and goes back to the day that Lisa made her speech. He then convinces the crowd to go to the cemetery and shoot up the graves of the cowboys, saving the day. That is until another future Homer arrives and warns them all that the world has been destroyed by gun violence. But Moe just shoots that Homer, and everyone moves on.

The Island of Dr. Hibbert

Our final story of the episode is a parody of the Island of Dr. Moreau, which is always an insane story to adapt. It opens up with the Simpsons going to spend their vacation on the Island of Lost Souls, which turns out to be owned and operated by Dr. Hibbert. And he’s obviously gone insane and has a Willie/Gorilla butler. But that doesn’t seem to raise any red flags for the Simpsons, who get settled in for their vacation and even go have a meal with Hibbert where they eat a Frink turkey.

But that night Marge starts to get suspicious, and heads out to investigate the island while everyone else sleeps. She quickly comes across something called the House of Pain, and heads on in where she’s grabbed by Dr. Hibbert. She’s then turned into a Panther woman, and she heads back to the Simpson’s cabana to have sex with Homer, who takes far too long to realize Marge is a panther. But once he does he heads out to investigate, and ends up finding the House of Pain too, finding Ned inside as a cow/centaur. And after milking Ned he’s carried through the jungle until he finds a village of animal people, who are having a meeting about Dr. Hibbert. Oh, and the rest of the family have already been turned into animals. At first Homer assumes they all want to turn back into people, but it turns out being an animal rocks, and they end up convincing Homer that he should be turned into a walrus. So everyone’s happy. Oh, and Kang and Kodos show up for their obligatory cameo to comment on how weird the Island looks before leaving and ending the episode.

Yeah, it’s not my favorite Treehouse of Horror episode, but it’s not too bad. There have certainly been worse. Although, man, was that opening a tease. They were so close! They easily could have cut back before each segment to show ghost Maude reading all of the stories, but no, the wraparounds are apparently saved for the other weird triptych episodes that they’re making around now. But what we got was fun. The clone segment is silly and stupid, but it has some solid gags, like the failed clones including Peter Griffin. And I’m not going to lie, the gag with Homer asking the clones if they know the way home, and then shooting the ones who do, is a solid joke. The cowboy one was certainly the weakest of the three, but it was alright. Nothing too objectionable. And it had Kaiser Wilhelm as a cowboy. But the Dr. Hibbert segment is probably my favorite, because I think anything referencing that silly book is pretty fun, and it was a blast seeing all of these Springfield citizens turned into animal people.

“Treehouse of Horror XIII” was written by  Marc Wilmore, Brian Kelley and Kevin Curran and directed by David Silverman, 2002.

Tagged as: 2002, Halloween, Lifetime of Simpsons, Season 14, the Simpsons, Treehouse of Horror XIII