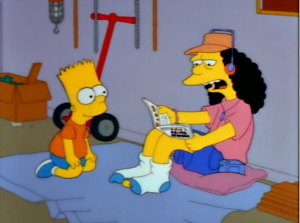 And episode about Otto. Yep. That’s odd right? Otto doesn’t really scream “character we’re dying to know about” does he? At least this early in the series. It’s a funny episode, it just seems kind of strange to pick Otto to be the driving force of you episode, to the point that the episode is even named after him.

The episode starts off with Bart getting ready for his first rock concert, Spinal Tap. That’s so hilarious to me. Of course Spinal Tap is real in the world of the Simpsons, and since the tremendous Harry Shearer is in both the show and the film, it makes sense that they would be picked. We even get the actors from the movie as their characters in the episode. Bart is stoked, and Homer is getting ready to chaperone him, by getting his old concert jacket out, which is a fringed leather jacket, that still has a Billy Beer in the pocket. Homer then proceeds to drink the twenty year old beer, and doesn’t vomit immediately. I also love that apparently Homer has sever tinnitus and can’t hear anyone speaking. Oh rock concerts, they’re the best. I love going to concerts, and because I have strong affection for classic rock, I’ve seen a lot of old acts. My first was Paul McCartney, and I was deaf for like a week afterwards because I happened to be seated right next to a flashpot that went off during “Live and Let Die.” But Homer and Bart head off to pick up Milhouse, whose also going to the concert, and has a pretty rad leather jacket on. 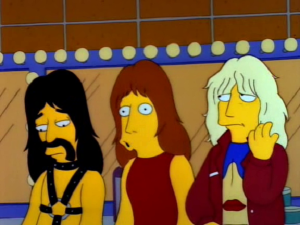 I really love the brief scene of Spinal Tap getting interviewed by Bill and Marty, because it’s always fun to hear bands talking with local radio hosts that they couldn’t give less of a shit about, since you aren’t in LA or New York. It’s also that they attribute their popularity to the fall of Communism, and that they refuse to say “No one rocks like Bill and Marty,” since there may in fact be people who rock more than them. The concert then begins, and in typical Spinal Tap fashion, everything in the concert starts to go wrong. A flashpot blows up a roadie, David’s combed-over hair gets blown off, there’s water everywhere, the Satan balloon is deflated, and Nigel gets blasted in the eyes with a laser. But they still try to put on a good show, even yelling out Springfield and local references, which always impresses the rubes. But eventually they can’t take it anymore, and end the show after only 20 minutes, causing the concert to become a riot. It made me laugh so hard that Homer doesn’t notice a riot going on, since he’s too busy singing along with lyrics to “Spanish Flea,” that apparently exist. But he ends up bringing a battered Bart home, who has a new dream in life: becoming a rock star! They also realize they forgot Milhouse at the concert, which I can understand from Homer, but Bart didn’t notice they left his best friend?

Marge decides to encourage Bart, and they get him an electric guitar. I got into guitar in my freshman year of highschool, and am still terrible to this day, so Bart fiddling around with his new Strat, trying desperately to get a solid note out of it struck very close to home. It’s also pretty great that his ideal fantasy about being a rock star is being a broken, bloated wreck that’s hit rock bottom, yelling “Slag off” at everyone. But Bart doesn’t take to the instrument very well. I really loved the scene of Bart trying to play while Lisa shows him up with her sax, claiming to be jamming with him. “Well it sounds polly-wolly crappy.” Bart, dejected then talks to Otto on the bus, saying his guitar is broken because he can’t get it to sound right. So Otto grabs it, and it turns out he’s a pretty good guitarist. Everyone on the bus loves his music, so he starts playing “Freebird,” which of course takes an hour, and he realizes he’s late for school. Otto starts speeding to school, and takes a short-cut that brings them through the Tire Fire, they smash into a tour bus and they kill Spinal Tap, they race through a police picnic, and finally flip over and crash into the statue of Jebediah Springfield. Principal Skinner then fires Otto when it turns out he doesn’t even have a drivers license, and Skinner takes over the bus until Otto gets a license.

I love that Skinner is a super passive driver, and ends up staying at an intersection all day waiting for someone to let him in. And while Skinner is failing at driving the bus, Otto goes to the DMV to try and get his bus license, but things don’t go off to a good start when he asks Patty “Have you always been a chick? I don’t wanna offend you, but you were born a man right?” He then proceeds to knock over every cone in the driver’s test and misspells bus on the application. Needless to say, Otto doesn’t get his license, and ends up getting evicted from his apartment, and has to live in a dumpster outside of the Kwik-E-Mart. But Bart finds Otto after throwing out a chutney Squishee (ew) and ends up inviting him to stay in the family’s garage. Bart apparently didn’t tell the family though, but they end up finding out that night when Otto and Bart are playing music in the garage at 3 a.m. Marge and Homer are obviously pissed, even though Bart faked a recording with him impersonating Marge’s voice, that doesn’t fool anyone but Homer. But Marge folds, and lets Otto stay, even though Homer quotes the famous line from scripture, “thou shalt not take moochers into thy hut.” Otto then proceeds to become a bum, just sitting around all day watching TV without a shirt. I do love that Homer finally notices Bart has given up on the guitar, and isn’t even mad since “If something’s hard to do, then it’s not worth doing.” But Homer and Marge decide they’d had enough of Otto after he scares Lisa with a ghost story. Otto gets pretty depressed at that point, and Marge encourages him to go take the bus license test again. He’s resistant at first, until Bart inspires him by telling Otto that he’s the coolest adult he’d ever met, the first time Otto had been called an adult. He then storms off the DMV, and does just as bad, but mentions that he hates Homer Simpson to Patty, who decides to pass him for spite. And Otto is the bus driver again! 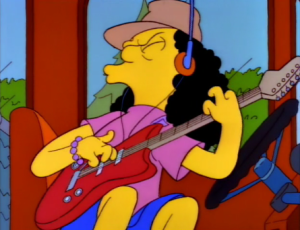 This was a pretty wacky episode. It was fun seeing all of the rock concert stuff, and Bart trying to learn guitar, but the Otto stuff came off as a little half baked. Him living with the Simpsons could have been a whole episode, not just the third act, so it felt a little rushed. Yeah, we needed the set up for why he gets fired, but it maybe could have been done a little more efficiently. It kind of felt like two plots that they loved, but couldn’t flesh them out enough to be their own episodes, so just kind of smooshed them together.

Take Away: “If something’s hard to do, then it’s not worth doing.” And I guess always have a real drivers license? And rock concerts are a blast.

“The Otto Show” was written by Jeff Martin and directed by Was Archer.

Tagged as: Lifetime of Simpsons, Season 3, the Otto Show, the Simpsons