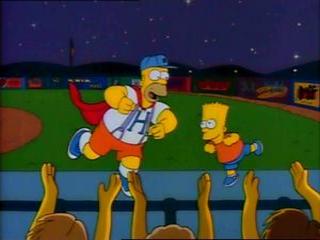 Now here’s a weird one. A look into the strange world of professional sports mascots! Not being a sports fan (except for hockey) I never enjoyed when I would be dragged off to watch one of Denver’s several mediocre teams lose on their home fields, but as a kid, I always loved checking out the mascots, because they seem like such a weird creation. Grown adults who wear big costume and caper around like idiots to the chagrin of everyone in the stadium. So of course we get a great episode where Homer joins their illustrious ranks.

Much like the “Telltale Head,” this episode starts with a frame story, and is basically just Homer telling the barflies at Moe’s the tale of his rise and fall as a mascot. Apparently Otto is the only bus driver in town, so when the Nuclear Plant has an employee appreciation night at the local minor league baseball game, he’s the man to drive them. I love that Otto implies that they “lost ’em,” because apparently the simple trip to the baseball field involved a high-speed chase. Marge tries to warn Homer to take it easy at the game this year, but he informs her that his tickets gives him the right, nay the duty to make an ass out of himself. And I totally know where Marge is coming from. My company has had employee picnics at baseball games before, and even once oddly at the zoo, and there’s a weird pressure to drink, but not too much, since you have to work with these people after the weekend. The Simpsons show up at their seats where they’re greeted by Mr. Burns, who once again needs a card to tell him who his employees are. I love that the card is out of date and lists Maggie as “expecting.” The family get into their seats, and Marge manages to get Bart’s baseball signed by a washed-up former major league player, even though he signed it with his room number in the hopes that Marge would meet him there… sketchy. I really love Bart and Lisa trash talking the players while they warm up by having Bart yell “you throw like my sister!” to which Lisa retorts “yeah, you throw like me!” Sick burn!

After Bleeding Gums Murphy sings a ridiculously long version of the National Anthem Homer finds out that for the rest of the game he’ll be sitting right next to Mr. Burns. As the game between the Springfield Isotopes and the Shelbyville Shelbyvillians (really?) begins Homer and Burns actually bond while getting drunk of buckets of beer. But as the Isotopes begin losing, like always, Homer decides to rev up the crowd. So with the help of some liquid courage, Homer jumps up on the dugout and starts dancing around the “Baby Elephant Walk,” and the crowd goes nuts, leading to the Isotopes first win in ages. That night Homer is approached by the owner of the Isotopes, Antoine Tex O’Hara (apparently we’re just going to gloss over that) and is offered to position as the resident mascot of the team. So Homer designs his costume and creates the name Dancin’ Homer, and dances the Isotopes to victory. He becomes a local celebrity after the Isotopes begin to hit a hot streak, but eventually their streak ends, and the Isotopes finally lose a game. Homer assumes that he’s being fired, but it turns out he’s being called up to the majors as the second-string mascot for the Capitol City major league team.

Homer manages to convince the family to move and after Bart and Milhouse become “spit brothers” and Lisa realizes that she doesn’t have any friends who would miss her, they head off to Homer’s last game with the Isotopes. We get a silly scene that parodies Lou Gehrig scene from Pride of the Yankees when Homer announces he’s the luckiest mascot on the face of the Earth. The family then packs up and heads off to Capital City, which is accompanied by a song sung by Tony Bennett! I love that the Simpsons are such rubes and are so impressed by the sketchy glory of a big city. The family head straight to the baseball field for Homer’s first game, where Bart is confused by feelings of pride for his father. Homer then meets the main mascot for the team, the Capital City Goofball.

I love the design of the Goofball, he’s such a weird guy. And I’ve got to say, I’m a little surprised by his role in this episode. Obviously we’re already in the third act, so there’s not really much they can do with the character, but you’d think that he would be the old-timer whose threatened by Homer and acts like a jerk, trying to sabotage his career. But no, he’s a lovely man. He teaches Homer in the ins and outs of the team and sets himself up as a mentor to Homer. Unfortunately the refined Capitol City audience doesn’t appreciate Homer’s antics, and the end up booing him off the field. And then he’s fired after his first game, because apparently there’s no such thing as second chances in the rough and tumble world of professional mascots. So Homer and the family head back to Springfield, returning to their old life as Homer realizes that he can still get an ego boost from telling the patrons of Moe’s his story, still getting a modicum of fame.

This was a pretty fun, but relatively half-baked episode. There are some great jokes, but I feel like the episode just didn’t have a good idea of what it wanted to be. It spent way too much time in the set-up, showing Homer’s origins as Dancin’ Homer, and not enough time with his downfall. I would have loved if most of the episode was the trials and tribulations of being the mascot off the major league team, instead of relocated that plot to the last five minutes or so. But I guess it’s unfair to judge the episode because it wasn’t the plot I wanted it to be. But it was still a pretty fun episode with some great gags.

Take Away: Baseball is super boring without some drunk idiot dancing around to entertain us. And the mascot business is a tough one.

Tagged as: Dancin' Homer, Lifetime of Simpsons, Season 2, the Simpsons