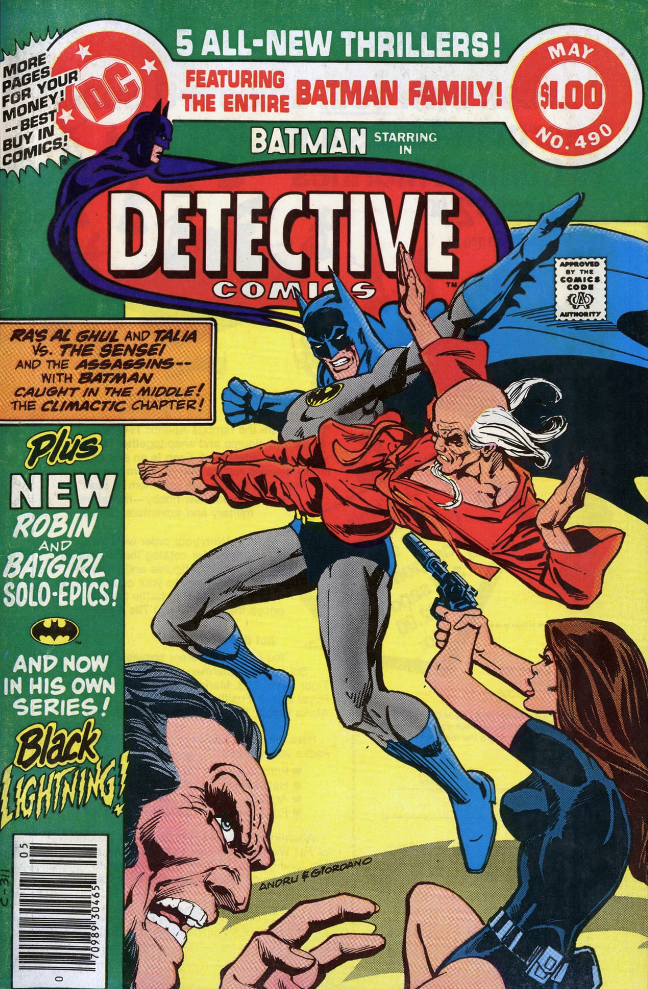 Hello everyone, and welcome back for yet another installment of Bat Signal, my never-ending mission to read every single issue of Detective Comics, in random order, and with basically no context. And today we’re going to be doing something that we haven’t done in a very long time. We’re crossing another famous villain off of our bingo game! I can hardly believe it, but this is the first time that I’ve talked about Ra’s al Ghul on this series. So that’s pretty cool! And, even better, he’s showing up in an absolutely insane story featuring earthquakes, holy men, a civil war between the League of Assassins, and a whole lot of Batman just yelling at everyone like they’re idiots and should be grateful that he’s helping them. It’s a lot of fun, so let’s do this thing.

The issue begins with a bang, with Batman swooping into the midst of an arms deal going down at a misty Gotham City dock. Batman leaps right into the fray, tossing off insults and jabs while beating the hell out of the goons unloading what appears to be boxes of explosives from a ship. And, these aren’t just any goons, they’re members of the League of Assassins, specifically followers of a powerful member known as the Sensei. And Batman has great desire to defeat these guys, because the Sensei’s men have recently killed Kathy Kane, the original Batwoman, someone who meant a lot of Bruce.  Batman still manages to make quick work of these goons though, only to find that the entire time he’s been fighting someone has been watching him in the shadows. It’s a man known as Lurk who works for Ra’s al Ghul, and who Batman has had rough interactions with in the past. So, logically, the two start fighting, more to just show which one of them is the toughest, all the while letting the Sensei’s men finish loading up their explosives and quietly sneak off. All because they’re a pair of macho jerks. 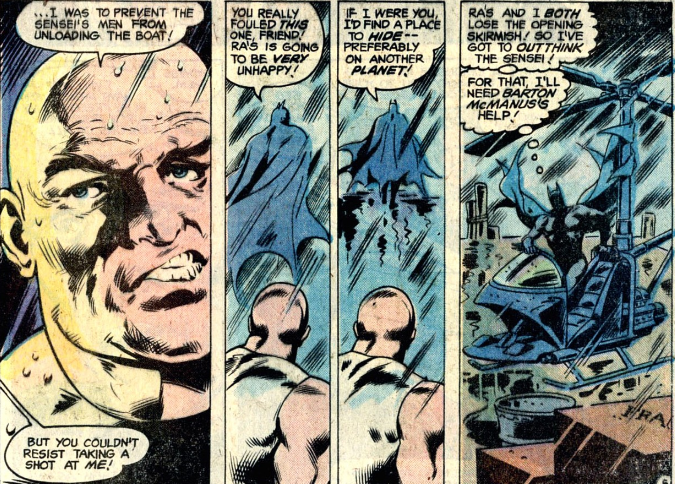 So, Batman has really only given himself more questions, which means he needs to try and figure out why the Sensei needs a bunch of explosives. And, to find that out he decides he needs a man named Barton McManus. But, while Batman is sorting that out and flying around in his little helicopter, things are happening in Gotham City. Most importantly, a group of famous religious leaders from around the world are arriving in order to have a peace summit in a secluded mansion outside the city. Commissioner Gordon has been tasked with protecting the men, which is made much more difficult by the leader of the men, Reverend Reeney, who is disgusted by guns to the point that he doesn’t want anyone within eye-shot of him holding a gun.

But, Gordon takes care of the defense as best as he can anyway. The barricade the roads leading toward the mansion, have guards standing around the fences, and even have helicopters patrolling the airspace around the mansion. Meanwhile, Batman has received Barton McManus, a man who recently had been kidnapped by the League of Assassins, and the Sensei, and forced to help show them some geological features of Gotham City. So, Batman brings McManus back to the Batcave, and has the man show him exactly what Sensei was so interested in, and if it could have anything to do with explosives. And, it turns out that the location that Sensei asked about would trigger a small earthquake that’s epicenter would be right where the religious leaders are meeting. Which can only mean one thing…

Hell yeah, assassination by earthquake. Anyway, Batman races off to the location of the fault line, and finds some League goons finishing up their excavation, where they’ve placed quite a bit of explosives. Batman fights the men, but in the process one of the League men throw a stick of dynamite toward the excavation site, causing an explosion that seals up their hole, trapping the explosives with a timer, meaning Batman has no way to stop it. So, if Batman has no way to stop the explosion, he needs to save the men it’s meant to kill. Batman then hops into his helicopter and heads toward the mansion as fast as he possibly can, which ends up being a bad call. Because he doesn’t have time to warn Gordon, meaning the highly alert officers see a helicopter barreling toward the mansion, and assume the worst.

The police shoot down Batman’s helicopter, and he ends up crashing on the grounds of the mansion, dragging himself from the wreckage. Some police officers try to stop him, but even having been involved in a helicopter crash Batman is still able to kick their asses. He then lurches into the mansion, and announces to the religious leaders that they’re all about to die if they don’t flee. Everyone immediately trusts Batman and flees the building, except for that Reverend Reeney, who pitches a fit. So, Batman just leaves the man behind to be martyr, only to find that the Sensei is waiting outside for the leaders, ready to force them back into the mansion to die. However, as the Sensei is talking to the men, Reverend Reeney comes waltzing out and starts screaming about how the Sensei has a gun, leading the Sensei to shoot the man dead. And while doing so Batman is able to attack the Sensei, stealing his gun so that the man flees into the mansion. Batman’s about to follow him, when he gets a surprise dart to the back of the neck, causing him to collapse. It turns out that Ra’s al Ghul has been following Batman this entire time, with his daughter Talia, and they’ve now come to kill Sensei. Ra’s wants to take care of it himself though, so he has Talia take a drugged Batman away, and enters the mansion himself, right as the earthquake collapses the building, in theory killing Ra’s and the Sensei. But, Batman’s okay with it, because he’s healthy, he’s with Talia, and the Sensei isn’t around to harass Gotham.

This was a really fun issue of Batman. I just really love this era of the character, when Dennis O’Neil decided he should be this weird globe-trotting action hero, full of weird quips and having adventures with strange organizations like the League of Assassins. Yeah, I maybe would have liked a story that featured Ra’s al Ghul more than a weird cameo at the very end, but I think that those sorts of stories more often showed up in the Batman book, so it shouldn’t be too surprising. I’d never really heard of the Sensei, but it seems like he was a rival to Ra’s al Ghul and led a sort of civil war in the League, which ended up spilling over to Gotham, of course. But, the idea that he would steal explosives in order to trigger an earthquake to kill a bunch of people is pretty great. That’s some Max Zorin shit right there. We get crazy action, League of Assassins nonsense, Batman tossing out a bunch of insane quips and insults, and a helicopter duel. It’s just good comics.

“Requiem for a Martyr” was written by Dennis O’Neil, penciled by Don Newton, inked by Dan Adkins, colored by Adrienne Roy, lettered by Ben Oda, and edited by Paul Levitz, 1980. 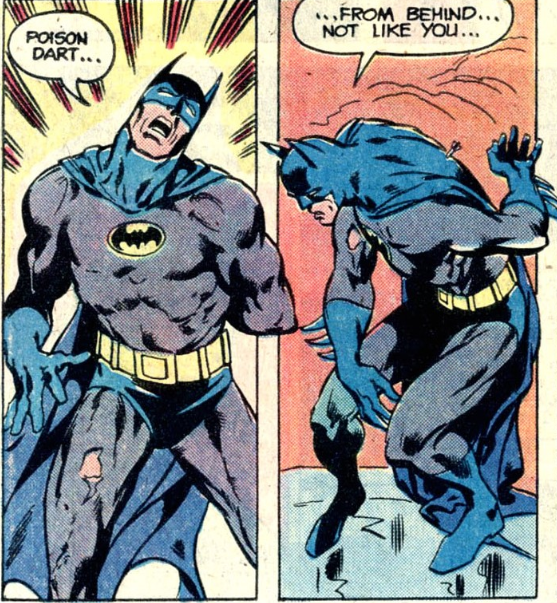