It’s not exactly a shocking statement these days to say that you’re into true crime and the stories of serial killers. For the past couple of decades these stories, both real and fictional, have been becoming more and more prevalent, to the point where just about anyone can rattle off some facts about Ted Bundy or Jeffrey Dahmer. I’m one such person who has become fascinated over my life with these strange people, and the whole idea of criminal psychology. In fact, allow me to admit something very embarrassing. When I first went to college, and signed up to have psychology be my major, I had every intention of trying to become some sort of criminal profiler, only to be informed that such jobs are largely fictional, or at the best almost impossible to attain. So, I left that minor dream behind, but continued to be fascinated by the macabre world of the serial killer. Which has really become easy in the last couple of years, what with the prevalence of true crime podcasts that such as Last Podcast on the Left or My Favorite Murder. Suddenly these stories of the most infamous criminals in American history are popping up all over the place, and it’s a gift to people like me.

Which brings us to Mindhunter. This series, another in Netflix’s long list of incredibly solid original programming, tells the somewhat fictionalized story of the formation of the FBI’s serial killer taskforce. Based on a nonfiction book about a group of FBI agents who created the term “serial killer” in the 1970’s and worked to classify and hunt down these mysterious killers. The series was actually created by Joe Penhall, but for whatever reason he’s not exactly been the name associated with the series. Instead, producer and frequent director of episodes, David Fincher, has kind of become the person most linked with this project, and I suppose it makes sense. Fincher directs the most episodes in the series, and his own fascinations and tropes are thoroughly entrenched in this series. The series feels very much like a David Fincher production, especially his 2007 masterpiece Zodiac. Which is extremely high praise.

The story follows two different FBI agents in 1977, Holden Ford and Bill Tench. Holden is a young recruit with experience in hostage negotiation who becomes convinced that the FBI should be doing more to understand and profile this new breed of killers that the Bureau has been struggling against, especially when he begins a relationship with a woman named Debbie Mitford who is working on a masters in sociology. Holden is eventually put into contact with Bill Tench, a veteran agent who is interested in Behavioral Research, and who travels around the country teaching local officers the FBI’s methods. The two get stuck together, and begins travelling the country, talking about how they wish there was a better way to deal with this unique brand of killers. And, as luck would have it, when on a routine trip to California puts them in contact with Edmond Kemper, the Co-Ed Killer. They meet with Kemper, and end up interviewing him, getting an insight into his twisted world. And, eventually they decide that such interview could have a serious benefit to the Bureau, and they begin work on interviewing other such killers, in the hopes that they can begin creating trainings that can help catch future killers like them.

They run into some serious conflict in the Bureau, since these radical new methods seem at odds with the button-down conservatism of the traditional Bureau. But Ford and Tench keep working, and when they get a professor of deviant psychology named Wendy Carr on their team, they really start picking up steam. They end up travelling the country, helping out local lawenforcement in their more grotesque and disturbing cases, while also interviewing more killers. They meet with Jerry Brudos and Richard Speck, learning more about the psychology of these killers, while also pushing the boundaries of what the FBI considers acceptable behavior. They create the term Serial Killer, they build a rough sketch of a profile, and begin to make actual progress. Which, of course, is when they’re told that they’re going too far. They’re told to pull back, but that’s just not something Holden Ford can do. He’s willing to leave everything behind, his girlfriend, his partners, his job, all because he’s become obsessed with this mission, to find the truth about these killers. And, by the end of this season, we see that that mission may be too much for him to handle. 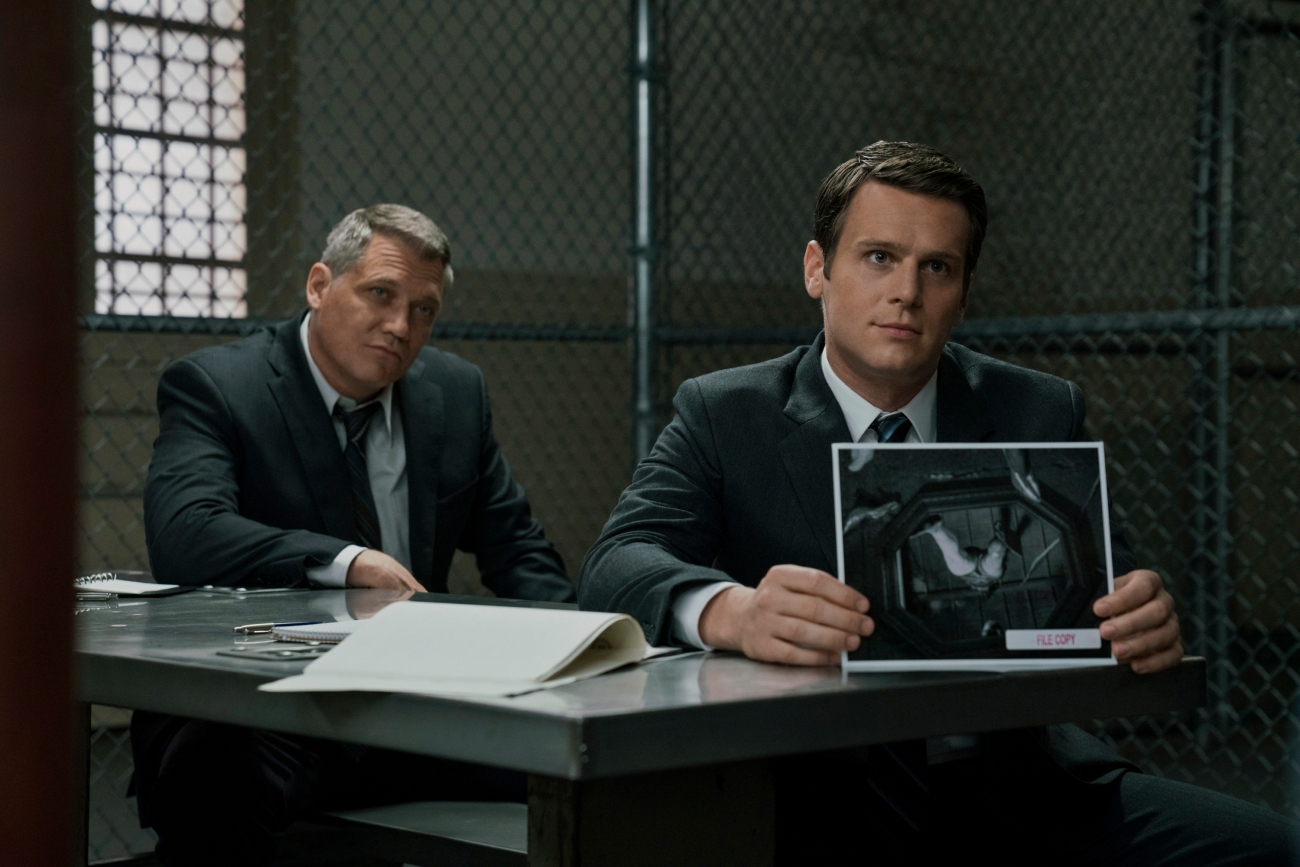 I really loved this show. Which I was pretty much expecting from the first moment I heard about it. A show set in the 70’s about FBI agents using criminal psychology and sociology to interview serial killers while drenched in a David Fincher aesthetic? That’s checking so many of my boxes it’s insane. The cinematography, direction, and sound design of this series in unbelievable, giving us a story that feels so similar to Zodiac you could almost consider it a sequel. But the real strengths of the show comes from the performance. Jonathan Groff is terrific as Holden, a perpetually idealistic man who is willing to do whatever it takes to accomplish his goals. Holt McCallancy is a joy as Bill Tench, a curmudgeonly and traditional law enforcement officer who brings a certain amount of comic relief with his gruff deadpan, while also tossing in some great pathos as the strain of the job begins to wear down on his psyche. Anna Torv rounds out the primary cast as Professor Carr, feeling exactly like all the psychology professors I ever encountered, while also showing the absolute loneliness that a person who devotes their life to understanding other people at the expense of understanding themselves develops. But, the real scene-stealers are the actors portraying the serial killers, especially Cameron Britton as Edmond Kemper, showing us an extremely dangerous but ultimately pathetic human who wants nothing more in his life than to be appreciated.

After watching this film, I was struck with a bit of a realization. I’ve said it multiple times already, but this series feel very much like Fincher’s Zodiac, which is one of my favorite films of all time. And, one of the things I find most interesting about Zodiac, Mindhunter, and really most of Fincher’s filmography, is how it tackles the idea of obsession. It really seems to be a theme that Fincher is fascinated in, and while this show isn’t entirely his creation, it still becomes possibly the most interesting aspect of this film. Because, what starts as a casual interest becomes Holden Ford’s absolute obsession. He begins the series curious about figures such as the Son of Sam, killers who seem to take lives for no personal reason. It just seems random, and he becomes interested in finding order in that randomness. So, Holden does whatever he can to discover the answer to that question. He ends up dragging Bill and Professor Carr down with him, getting them stuck in the wake of his never-ending obsession on solving this puzzle. He seems to throw away his life and his career because of this obsession, and by the end of the series we don’t really see that it was worth it. It was a popular opinion when majoring in psychology that most of us do it to find out what’s wrong with ourselves, trying to learn about psychology to diagnose some issue inside of us. And I really see that sentiment in this series. Holden becomes worried that he’s not normal, and that not being normal is something that could eventually lead him down a path similar to the people like Edmond Kemper. He sees the truth by the end of this season, that the obsession he feels about solving these people is the same obsession that drives them to do the things they do, and he’s horrified. It was an absolutely fascinating concept to base this show around, and I really look forward to the dark depths of the human mind that it plunges into in the future.

Mindhunter was created by Joe Penhall and released by Netflix, 2017. 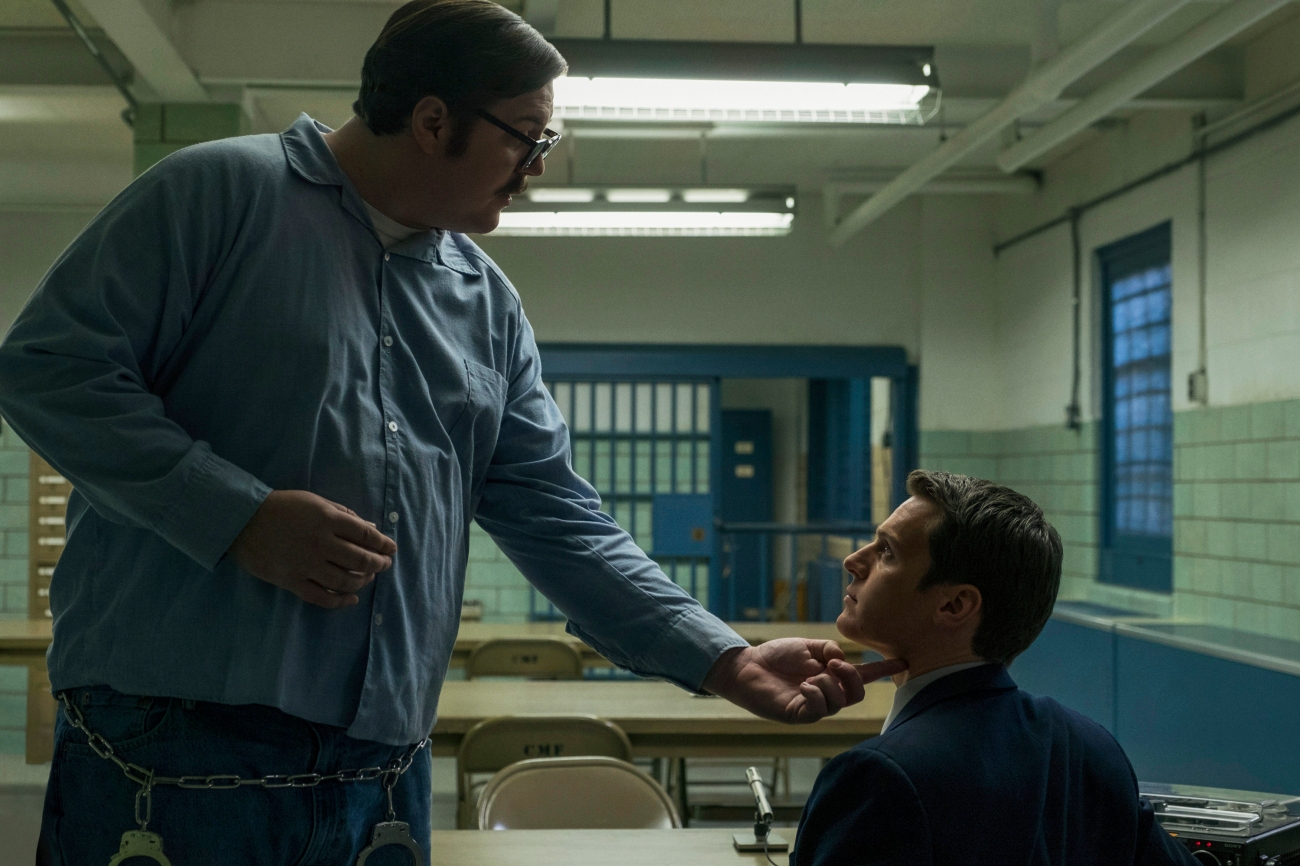