Howdy everyone, and welcome back to another week of Lifetime of Simpsons. And, luckily, we’re in for a better week than last week. Not that that’s hard. Plus, we’re starting things off with an episode I genuinely liked. And, to make things better, it’s another episode about Grandpa! And embarrassment of riches!

The episode begins with Homer walking into the living room and finding Lisa reading instead of watching TV. He’s horrified by this idea, and starts to extol the virtues of the golden age of television that they’re currently in. This actually persuades Lisa, until she realizes Homer isn’t talking about Mad Men or Breaking Bad, he’s talking about terrible TLC shows about people with incredibly unlikely jobs just working.

Homer flips through a bunch of awful ideas, just spitting out a bunch of sight-gags, until finally ending on a show where people bid on storage lockers. Which is something that still baffles me exists in our world too. Lisa decides that the show is a ridiculous waste of time, and storms off. But Homer? He gets addicted. He then spends the rest of the goddamn day watching this show, slowly getting drawn into believing that bidding on random storage lockers is the best idea in the world.

So, falling right down that slippery slope, Homer convinces the family that it makes sense for them to go to a local storage locker and bid on some. They for some reason let him do this, and the family head to the storage facility, only to find a bunch of other local weirdoes who also watch this show, and who also think this is a valid way to spend their money. Unfortunately for Homer, they also know all the tips and tricks that the show tosses out, so it becomes a pretty angry bidding war.

At the end of the day though Homer manages to secure one of the lockers, by bidding an absurd amount and the family head inside to see what they’ve won. And it’s kind of a weird locker. It’s full of boxes that contain boas, spandex tights, perfume, wigs, and body building magazines. But, to make things infinitely weirder, they notice one of the boxes has Grandpa’s name on it. Yeah, it turns out that they a) bought a locker belonging to a family member, and b) its got some very strange things in it.

And, based on the evidence, Marge starts to think that Abe may be gay. Homer fights against this at first, but starts to realize that it may explain why Mona left, and kind of comes around on the idea. The family then decide to go help Abe out of the closet by promising to be as supportive as possible. So the family get decked out in Pride gear and head over to the Retirement Castle to let Grandpa know that they stand behind him.

However, when they get there they find that Abe is absolutely baffled. And mad! He’s very irritated that they went through his private and personal belongings, and shoots down the idea that he’s gay and hiding anything. But Marge isn’t going to give up. She decides to make it her mission to help Abe come out of the closet, and even goes so far as to set up a fake hookup request for him on the internet. You know, completely normal behavior?

Anyway, they post that Grandpa is looking for a male date, and then go hide in the park to see what happens. And, awkwardly, Smithers shows up for the date, only to find Abe completely confused. So Homer and Marge decide to become more aggressive, and come out of their hiding place to tell Abe he can be openly gay now and give him one of his weird old wigs. And Abe explains that he is not gay, and doesn’t want to talk about this whole situation any more.

But then, to make things even weirder, Mr. Burns shows up in the park. Smithers just runs for the hills, not interested in this situation. But, oddly enough, someone is interested in perusing this situation. Mr. Burns. Because it turns out that Grandpa wasn’t hiding some cross-dressing, he had all of that stuff because he used to be a wrestler in the forties. His name was Glamorous Godfrey, and he was some version of Gorgeous George.

Burns then brings Grandpa , Homer, and Bart back to his mansion to show off all of his Glamorous Godfrey memorabilia, because he was apparently Abe’s greatest fan. Abe then starts telling them the story of his professional wrestling career, explaining that he kind of fell into the job, and became a famous heel whose whole bit was his vanity. He was one of the most popular villains in the sport, and life was great. Until it started bleeding over into his real life, where people couldn’t separate him from his character, and started to hate him in the real world. And that made things lose its luster, causing him to quit.

Which Burns hates. He loved Grandpa’s villainous performances, and wants to hear all about his career. Abe doesn’t really want to relive this weird part of his past, but when Bart starts to talk about how fascinated he is with the wrestling Abe decides to go through with it, enjoying the attention he’s getting from his grandson. So Burns, Grandpa, and Bart go to some fancy club that Burns is a member of, and they get lunch while telling stories.

Bart and Burns love the stories, while Abe is a little embarrassed about them. And after telling them some of his juiciest memories, Burns goes ahead and asks if Abe ever thought about going back in the ring. Abe explains that that thought has never crossed his mind, not just because he’s an old man, but because he hated being booed. Which makes Burns decide to plead the case that being booed and hated is the best. And, obviously, he does this by singing a huge song, essentially feeling like a Disney villain song, and it’s fantastic. 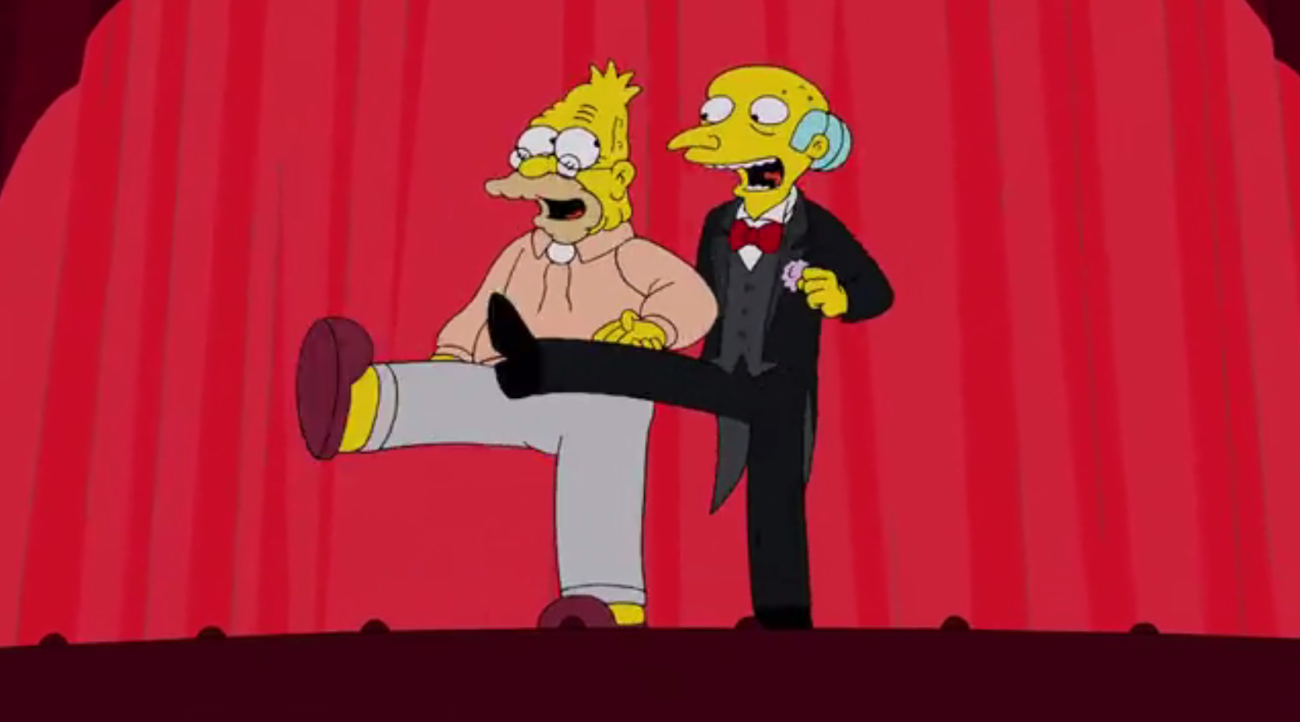 And Burns did a good job, because Abe ends up agreeing to give it a shot. Burns then rapidly starts putting together some sort of octogenarian wrestling show, with Abe as the headliner. The whole family and a bunch of assorted weirdoes go to the show, and it’s mostly depressing. Until Abe shows up. Because Grandpa is a hell of a showman, and his Glamorous Godfrey character is a perfect villain that gets the crowd completely riled up. Everyone loves it. Especially Bart.

Bart decides that this showboating heel turn is amazing, and wants to fit it into his own life. So, with Milhouse’s help, Bart ends up getting in a huge costume for his little league baseball game, and brings all of the tropes of a wrestling heel to this sport, pissing everyone off. Bart becomes loud and just starts cheating openly, and ends up feeding on the boos. Which is a red flag for Homer and Marge. They try to convince Bart that he shouldn’t act like this, and that Grandpa’s behavior isn’t anything to emulate, but Bart ignores them.

Homer then storms off to yell at Abe, blaming him for Bart’s behavior. Abe really doesn’t give a shit about Bart’s behavior, but Burns loves it. He loves the idea of a smaller Glamorous Godfrey, and suggests that they let Bart be a wrestler as Abe’s tag-team partner. And, even though Homer and Marge seem to be against it, Beautiful Bart becomes Glamorous Godfrey’s new partner, and they begin advertising their huge upcoming match.

But Marge won’t give up. Before the show she comes and tells Abe that she doesn’t want Bart to become a bad kid, and tells him how worried she is that he’ll start acting like a heel outside of the ring. Abe blows her off, figuring that that could never happen, until he almost immediately realizes that Marge is right. Bart starts acting like a blowhard, and Abe starts to become worried that it’s all his fault. So he needs to fix this.

And how is he going to fix it? Well, by switching things up. Because when he and Bart come out to fight a man and a little person for their tag-team match, Abe announces he’s no longer Glamorous Godfrey. He’s now Honest Abe, a face who stands for virtue. He then forced Bart to become Lenny Liberty, which Bart hates. Oh, and Burns hates it too. He’s furious that there’s no villain on the match anymore, and decides to get in the ring himself as the new villain. But it’s okay, because Abe learns that he loves the sound of cheering just as much as the boos, and decides to officially give up on his Glamorous Godfrey persona, becoming a good guy.

This episode is a whole lot of fun. I’m quite on record that I’m always in favor of more Grandpa episodes, especially ones that fill out some background on the character. Which this episode certainly does! Yeah, it gets a little insane that this season we’ve learned that Grandpa was a famous wrestler in the fifties and a popular pianist in the sixties, but whatever, I love Abe. And the idea to make him a wrestler is great. Plus, making him a fifties wrestler in the vein of Gorgeous George is great. I feel like my impulse, especially with the ever-sliding timeline, would be to make Grandpa an 80s WWF wrestler, but having him be this older type of wrestler is great. I think the whole opening act with the family being convinced Grandpa is secretly gay because he owned wigs and perfume is more than a little weird, but the payoff of having him become a geriatric wrestler while teaching Bart that attention for being good is better than attention for being bad makes it all the better. Plus, that Mr. Burns villain song is a goddamn delight. It’s just a great episode folks.

“Gorgeous Grampa” was written by Matt Selman and directed by Chuck Sheetz, 2013.