Forever and a Death: The Bond that Never Was 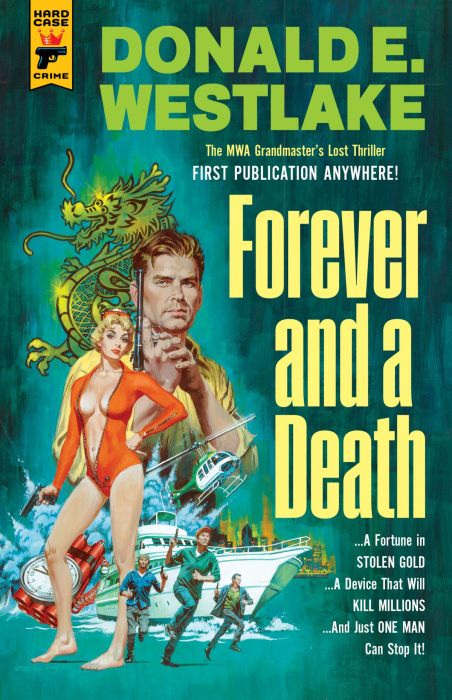 Well, we’re at the tail end of Bondathon, which means I’m having to get a little creative in terms of what to talk about. I knew going in that I wanted to discuss the literary Bond, since that’s where the character began. But after enduring The Spy Who Loved Me I didn’t really feel like diving back into Fleming. And, unfortunately, we haven’t had a consistent Bond novel series for fifteen years. Since then we’ve gotten a couple Bond novels, but they’ve all been one-offs, just random stories written by different people and taking place all over the timeline. But, as luck would have it, something very interesting has just been dropped into our laps. I recently wrote about a novel I enjoyed quite a bit, God Save the Mark, and promised that I would return to the weird and twisted world of Donald Westlake soon. I just didn’t realize how soon that would be. Because it turns out that just last month the fine folks at Hard Case Crime have scrounged up a previously unreleased novel that Westlake tinkered with before his death. And, it’s not just a random novel. It’s the fallout from a failed screenplay that Westlake crafted for a second Pierce Brosnan Bond film. Yep, apparently while GoldenEye was in production the folks at EON decided that they needed to be on the ball, and looked around for an idea for the follow up. And who they picked to craft that follow up was prominent crime author Donald Westlake. That screenplay was never created, but, similarly to Ian Fleming cannibalizing his failed screenplay into Thunderball, Westlake apparently turned his screenplay outline into a novel. And, we finally get to see it.

Forever and a Death tells the story of a man named Richard Curtis, a wealthy construction mogul who has recently been pushed out of Hong Kong after the city was given back to the Chinese, and they no longer tolerated his corruption. This has caused a domino effect where Curtis is secretly broke and has become a bitter shell of a man. So, like countless rich lunatics before him, Curtis decides to get some revenge. He does so by hiring an engineer named George Manville to create a new process for destroying landfills using a soliton wave in the ocean. Curtis claims he’s just using this process to level a small island off the Australian coast so he can build on it, but he’s actually planning on using the same process on Hong Kong, after robbing several banks of their gold. The ensuing chaos would destroy a majority of Hong Kong, and erase all evidence of the crimes.

However, like most villains, things don’t exactly pan out that way. Because after a woman named Kim Baldur gets hurt during the soliton test in Australia the whole chain of events begin falling apart. Manville realizes that Curtis isn’t on the level when he suggests just killing Kim to get the ecological activist group she represented off his back, and Manville quickly turns on Curtis to help Kim. The two are then thrown into a crazy world of intrigue while Kim and George try to escape the clutches of Curtis while simultaneously trying to figure out what he’s planning on using the soliton on, and stop him. Along they way they partner up with the leaders of the ecological group, a grizzled Australian policeman, and a mole on the inside of Curtis’ organization, trying to figure out what’s going on. They end up globetrotting all around the world, fighting off several bizarre henchmen while trying to get a hold of Curtis. And, as you might have guessed, they all end up in Hong Kong, the night of the planned attack, and manage to thwart it, in just enough time, while Curtis drowns in the submarine full of gold he stole, bringing a bit of justice to his crimes.

This book is a whole lot of fun. It’s a tad forgettable, but overall I quite enjoyed myself reading this book. Westlake is a hell of a writer, and he has a serious flair at describing exciting action sequences. Which is a real gift. Not everyone is able to get you pulse pounding by describing the cool things people are doing, instead of just showing it to us like in a movie. But Westlake could. True, I’m more of a fan of his more bizarre and comedic works, but the man could write the hell out of a thriller. And that’s what we got here. There are certainly problems, but I feel like the pros outweigh the cons. I’ll admit, George Manville is not exactly a dynamic lead character. But after a while Westlake seemed to have recognized that, and really turned the story into an ensemble, letting the whole litany of character get their moments to shine. And it’s helpful that Westlake created a terrifically interesting and weird villain in Richard Curtis, and basically gave us equal time with the heroes and the villains, something that you certainly don’t get from a traditional Bond story. So, while I may forget parts of this novel in the years to come, I certainly recommend checking it out, because if you’re a fan of Westlake it’s always nice to see one more novel from him when you had assumed that would be impossible.

However, there’s a second draw with this story, and the whole reason I’m talking about it today. The fact that this story came about from a failed screenplay Westlake submitted to EON. Apparently while GoldenEye was getting ready to be released EON began searching for a new voice for the franchise, and they were recommended to check out Westlake. He was intrigued, and ended up tossing out several different ideas, one of which was an incredibly timely one. EON wanted this next film to come out in 1997, the year that the British were handing over control of Hong Kong back to the Chinese government. And Westlake had an idea to take that setting, and have a ruthless construction mogul attempt to destroy Hong Kong after robbing it. Eventually the idea was shot down, because EON and United Artists were worried that the movie would appear in bad taste if the transition went south and ended in violence, and they just didn’t want to risk it. So Westlake took his idea, removed Bond, changed quite a few things around, and ended up creating his own story. If you read Forever and a Death there’s an interesting essay at the end of the novel telling us all about the drama surrounding this novel, and points out just how many aspects of it survived from the script. I don’t know if this would have ended up being a great Bond movie, it easily could have been more interesting than Tomorrow Never Dies, but it certainly had the potential. So if you’re craving some Bond I highly recommend checking this book out. It just might scratch that itch.

Forever and a Death was written by Donald Westlake, and released by Hard Case Crime, 2017.