One of the biggest crimes that an episode of the Simpsons can make is being boring. And it’s usually not an easy thing to accomplish, since this show can usually toss enough weird elements into an episode to give it some sort of life. But every now and then I come across an episode that’s filled to the gills with weird ideas, and still comes across as a big nothing. Such as today!

The episode begins with Homer eagerly preparing his annual Mardis Gras party that he holds every year. Yeah, apparently Homer holds a massive Mardis Gras celebration in his back yard every year, we’ve just never gotten to see it I guess. And this isn’t just some lame party where a bunch of suburban parents get a little tipsy. No, this is a goddamn rager with the whole town showing up to the Simpson’s back yard, which gets transformed into a little Bourbon Street, complete with floats, costumes, and plenty of beads.

The party is apparently a huge deal, because it seems like every person in the town is there. Even Mayor Quimby shows up to lend some legitimacy to the party. But there’s one person who didn’t get the invite. Ned Flanders. Marge feels bad that Homer didn’t invite Ned, even though he’s next door, so Homer goes over and awkwardly invites him. And, shockingly, Ned agrees, walking around the party uncomfortably and bumming everyone out when midnight comes around and it becomes Ash Wednesday.

But Ned’s presence wasn’t enough to ruin the party, because it rages all night, with most people just sleeping in the Simpson’s backyard that night. And the next morning while Homer begins cleaning up he starts chatting with Lenny, who is confused about how Homer affords these massive parties. And it turns out that Homer has been taking out Home Equity Loans for these parties every year, which is a terrible idea.

This is demonstrated by the fact that Homer doesn’t seem to know what a Home Equity Loan is, and that becomes clear when they get a letter from their mortgage lender saying that their interest rate is about to drastically change. So Homer and Marge go see their mortgage broker, who is unfortunately Gil, and learn the bad news. Their monthly payment has become massive, and they have no way to pay it off, leading Gil to do the only thing he can. Foreclose on the house.

Yep, the Simpsons have been foreclosed on, and their house is going up for auction while they just have to stand in the front yard watching it happen. They’re obviously crushed, and just kind of wander around the empty house, remembering all sorts of precious memories of this house that they’ve loved for years. They then just have to stand by while the auction begins. And there’s a surprising person who ends up winning the auction.

Ned. He’s given the winning bid and officially owns the Simpson’s house. But not for any ulterior motives, he did it so that he could rent the house back to the Simpson’s, letting them pay whatever they can until they get back on their feet. And the Simpsons are obviously massively grateful. They have Ned and the kids over to the house to thank him, taking pictures and showering him with affection. But their relationship takes a slight turn when Marge complains about their leaky kitchen faucet.

Homer is ready to half-ass repair the faucet, but Ned mentions that since he’s technically their landlord now it’s his responsibility. So Ned starts working on the faucet, and Marge instantly gets out a honey-do list that’s absolutely filled with random chores that Ned now has to do. And thus a slippery slope has been created. Because now the Simpsons have no intention of taking care of the house, and just expect Ned to fix any random issue.

Hell, they even call him in the middle of the night one day to fix a rampaging gas leak in the house. And Ned does something surprising, and holds his ground, refusing to come over and fix it. Which was a bad call, because now Homer’s incredibly entitled and is furious that his “landlord” is screwing him over. Homer begins raging about Ned, and ends up calling Kent Brockman to do a sleazy report about Ned as a shitty landlord that no one should trust. Ned is obviously less than thrilled with this news story, and does something that you wouldn’t think he would. He decides to evict the Simpsons and get better tenants in his property. The Simpsons are pretty pissed about this decision, and Homer even tries to dress up like Jesus to convince Ned not to do it, but there doesn’t seem to be any way to convince Ned to let them stay in the house. So that means they’re going to have to be crafty.

The Simpsons then investigate some squatting laws, and find that if there’s an elderly tenant a family can’t be evicted, so Homer runs over to the Retirement Castle and brings Grandpa home to live with them. However, they also realize that for this loophole to work they can’t ever leave the house. Well, until they look more closely and find that Grandpa can never leave. So they of course leave him at the house and head out to have fun.

But when they get back they find that all of their belongings are out on the lawn, and the house is up for rent. They go demand to know what’s going on from Ned, and it turns out that he’s offered Grandpa a room at his house, and defeated the Simpsons yet again. So the family have to go stay in a homeless shelter while Ned puts the house up on the market. And he gets a bit almost immediately from a creepy Christian family that’s right up his alley. But right as they sign the paperwork Ned finds a picture of him with the Simpsons, and realizes he can’t do this. So he kicks the Christians out, incurs some legal woes from them, and brings the Simpsons back to bring everything back to normal.

Yeah, I don’t know, this episode just kind of does nothing for me. Which is a little weird, because there’s all kinds of strange ideas being tossed around that I would have imagined would have kept my interest. The Mardis Gras party as the beginning was a lot of fun, and I think the idea of the Simpsons almost losing their house has a lot of potential. But there’s just something that I can’t put my finger on that doesn’t work for me. And it may be the central premise of the Simpsons being terrible tenants to Ned. That may just rub me the wrong way, and keep me from connecting with the episode, because holy crap are the Simpsons unpleasant in this episode. Ned Flanders does the nicest thing that’s ever been done to them in this episode and they immediately act like assholes. Which bugs me. Ned’s justifiable in this episode for kicking the freeloaders out. But whatever the reason is, this episode is just kind of a dud for me. Your mileage may vary though. But we have some real insanity to end the week on tomorrow!

“No Loan Again, Naturally” was written by Jeff Westbrook and directed by Mark Kirkland, 2009. 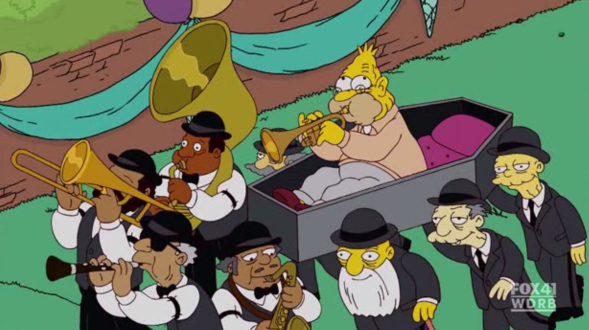 Tagged as: 2009, Lifetime of Simpsons, No Loan Again Naturally, Season 20, the Simpsons