Well everyone, Lackluster Week just keeps crawling by, and we have a real odd little addition to talk about this week. I’ve mentioned before that I’ve never seen these last few seasons, and they’re all new to me, and I sure have been shocked at some of the decisions that they’ve made. One of which was the idea in “Milhouse of Sand and Fog” that they were going to undo Kirk and Luanne’s divorce. That didn’t really sit well with me. And guess what we have today? And escalation of that bad idea!

The episode starts off with the Simpsons and the Van Houtens hanging out and having a picnic at a park. Things seem pretty nice, until Homer notices a bee on Maggie and freaks out, leading to him getting his head stuck in the beehive. He flails around a bit, but it doesn’t really matter, because they just kind of ignore Homer and set up the premise. Because apparently the reason that they’re having this picnic was so that Kirk and Luanne can announce that they’re getting remarried.

So with this announcement taken care of we cut straight away from the park and into the Simpsons house so that they can get ready for the wedding. Not really sure why they needed that park scene, but whatever. The family get all dressed up, and while Homer and Marge are dressing Homer makes a real faux paus and admits that he doesn’t know what color Marge’s eyes off the top of his head. And this infuriates Marge, and leads to a big fight in the bedroom.

But that won’t come back for a while, other than the fact that for the rest of the episode Marge will be wearing sunglasses to hide her eye color, and we head right over to the wedding. Which is super awkward. Mainly because Reverend Lovejoy is just straight up reminding Luanne how horrible Kirk is during their vows. But he doesn’t convince her, they get remarried, and then immediately get on a cruise ship for their honeymoon, leaving Milhouse with the Simpsons.

So Milhouse heads back to the Simpson’s house, and camps out in the living room with Bart, thrilled that his parents are back together and his life can go back to the way it used to be. Which is right when we cut back to the cruise ship and see Kirk and Luanne drunkenly stumbling around the ship, before accidently slipping and falling out of the window of the casino. They fall into the ocean, and are promptly left behind by the ship.

Back in Springfield we see Bart and Milhouse goofing off, being mean to Lisa, when Milhouse casually mentions that he’s having such a great time that he doesn’t even care if his parents come back. And right on cue some representatives of the cruise line show up and give Milhouse the bad news that his parents are lost at sea and presumed dead. Bummer. The cruise people seem to have given up hope, but Homer and Marge agree to keep Milhouse with them until they get a definitive answer.

And, surprisingly, Milhouse isn’t taking this very well. He becomes incredibly depressed, and there’s nothing the family can do to pick him up. Well, that is until he chats with Maggie, and she gives him her milk bottle. He begins drinking from it, and realizes that he’s acting like a baby, and decides to become more of an adult. Which apparently means Milhouse is going to become an emo. He starts dressing in black, combing his hair differently, and just acts like he’s full of ennui.

But you know who is into this new personality? All of the girls at Springfield Elementary. Especially Lisa. They’re completely obsessed with this new dark and tortured Milhouse and he’s suddenly the most interesting kid in school. Which really starts to rub Bart the wrong way. He’s used to being the center of attention, and he doesn’t like Milhouse taking his focus. So Bart decides to sabotage Milhouse’s new personality by making him happy, and thus uninteresting.

Bart begins researching Milhouse’s life, and discovers that he has an uncle who lives in a town called Salvang, which is some sort of Danish colony in California which I’m shocked to find is a real place. So Bart finds a Norbert Van Houten from Solvang, and calls him to tell him what’s going on with Milhouse, and that he should come to Springfield to raise him. And this works, which raises the question of why the cruise ship people didn’t call Norbert.

So Bart goes to the airport, ready to meet Norbert, and is shocked at the man he finds. Turns out that Norbert is goddamn Indiana Jones, some sort of explorer with his own plane that he flies around the world. And he’s stoked to raise Milhouse. So the two of them head to the Elementary School, and Milhouse instantly abandons his new persona and goes back to normal when he sees his super cool uncle, knowing that he has a family again.

Oh, I’ve neglected to mention it a lot, but the whole damn episode we’ve occasionally popped back in on Homer and found that he’s still struggling to remember what color Marge’s eyes are, and she’s gotten increasingly mad. He’s basically given up until Grandpa reminds him of a little song he wrote about Marge when they were first dating. Homer starts singing the song, and remembers that Marge’s eyes are hazel. And between the song and the eye color knowledge, Marge forgives Homer. Neat.

Meanwhile, Bart still isn’t happy about Milhouse. Now that Norbert is in the picture Milhouse begins spending all of his time with his cool uncle, flying around, and it’s starting to irritate Bart. Lisa then points out that this is because he’s afraid of Milhouse leaving him. Which turns out to be valid, because Norbert is planning on taking Milhouse back to Solvang with him. And to make things more dramatic, Norbert and Milhouse are first going to go on a hot-air balloon trip around the world.

Milhouse and Norbert get ready to head out on their adventure, and Bart gets really upset. He freaks out and ends up hopping into the balloon at the last second, coming along with them. And they seem okay with this, and let Bart travel around the world with them. Meanwhile, it turns out Kirk and Luanne are alive and living on a deserted island, and have crafted a hang-glider out of branches and stuff. And right as they leap off a cliff, hoping to sail to the mainland, they ram right into the balloon. So Milhouse is reunited with his parents, and Norbert’s satellite phone will get them back to safety. 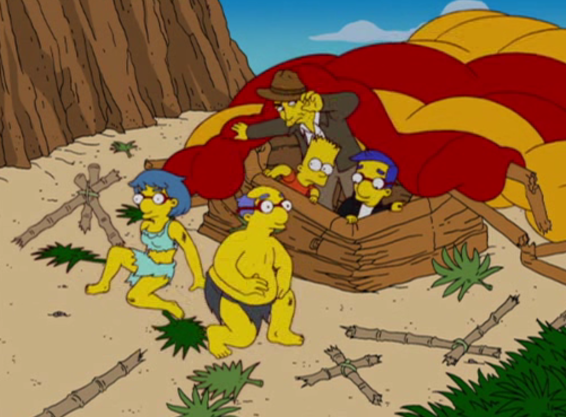 Back when “A Milhouse Divided” got discussed I really appreciated the fact that they found a way to discuss divorce on the show. It’s something that a lot of people go through, and of course they were never going to split up Homer and Marge, so having Bart’s best friend go through divorce, and occasionally check in on him and how he’s coping with that was a really great idea. But then they decided to undo all of that, and have them get back together, which seems utterly unrealistic. I’m sure this happens to some people, but the vast majority of divorced people don’t get back together, and this episode just nails shut the potential of that story, leading to now characters being capable of discussing this important topic. But that’s not really all that the episode is about. Because the rest of the it is pretty weak as well. I guess the idea of Milhouse becoming dark and brooding and thus popular is an interesting one, but it gets sidelines pretty quickly so all the Norbert stuff could happen. Which seems odd to me. If they had had an episode just about Milhouse finding himself I think it could have had potential. But they needed to have the episode suddenly revolve around Bart and his own insecurities, so they had to twist the plot around until it became too complicated. The whole episode was just kind of disjointed, full of random scenes that felt like they could have been steamlined. I mean that whole first act just has characters giving exposition in ways that they could have just shown. We didn’t need to see Kirk and Luanne tell the Simpsons that they were getting married at a park, they could have just started with the family getting ready for the wedding. I don’t know, it just felt like a lazy episode that abandoned a narrative vein that could have continued to be useful in the future.

Take Away: If you’re worried that not enough people are interested in your life, start becoming dark and brooding.

“Little Orphan Millie” was written by Mick Kelly and directed by Lance Kramer, 2007.