Hey everybody, and welcome back to another week of Lifetime of Simpsons. And folks? This is a big week. We start off with the 400th goddamn episode of the Simpsons, which means I’ve written 400 articles about the Simpsons. Holy crap. But that’s not it! Because tomorrow we get the Simpsons Movie! And then we start Season 19! This is a huge week! And, other than the Movie…it’s all kind of shockingly mediocre. Let’s get to it!

Like I said, this is the 400th episode, which results in us getting a fun short from the Tracy Ullman days instead of a couch gag. It’s basically all about Homer trying to wrangle the family together to get a family photo, and everything goes wrong. They spend a whole roll of film trying to get a decent picture, and it just seems impossible. It’s fun. But once that’s out of the way we need to actually go with the episode, and things get kind of weird.

The episode actually begins with Marge and Maggie hanging out with Patty and Selma, playing Pictionary. Maggie and Marge are dominating, because they have some sort of kindred bond, but Maggie realizes that it’s time to leave so they’re home in time for Bart and Lisa to get home. She then draws a picture that conveys that, and Marge and Maggie run from the apartment, and because their car won’t start Marge has to run through the town like that scene from Raising Arizona. She ends up going through sewers, a parade in Chinatown, a St. Patrick’s Day parade, and finally getting home.

And once Marge and Maggie are home everyone else gets there, and we learn that the reason Marge was so eager to get home was because the whole family have to pack up and go to the dentist. So they drive over and we get a variety of sight-gags. Homer has a horrible cleaning that terrifies the people in the waiting room, Bart pretends to be a dentist to harass a gassed out Principal Skinner, Lisa watches a terrible cartoon about gingivitis staring Ludacris, only to have Ludacris show up and assault the dentist because he wasn’t supposed to be showing this cartoon anymore. 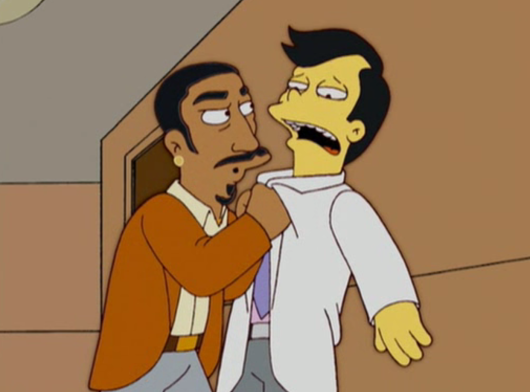 Once their dentist trip is over though, the family decide they need to reward themselves for their lack of cavities by going to get ice cream. So they cart over to Phineas Q Butterfat’s to get some treats. And when Homer goes up to buy a cone, he’s shocked to find that he just bought the store’s millionth ice cream cone. And because Springfield is a sad, sleepy little town most of the time, this is a huge deal, and Homer’s “accomplishment” becomes a media sensation.

And it all leads to Homer getting to come on Smartline with Kent Brockman. Which Brockman is very irritated about, because he would apparently rather cover actual news. This leads to a lackluster interview, which gets spiced up when Homer accidentally drops some hot coffee into Kent’s lap, causing him to scream an unknown profanity, loudly, on live TV. And almost immediately Kent gets terrified about what he just did, and starts to apologize and back track, hoping that no one will notice.

Luckily, no one did. Kent and Homer leave the studio, curious about how the public will respond, and they’re shocked to find that no one actually watches Smartline, so no one saw the gaff. Kent’s clear! Well, that’s not true. Apparently two people saw the episode. Grandpa, who doesn’t really matter, and Ned, who sits and scours local television for signs of perversion so he can post it online and get the over-protective Christian right furious about something dumb. Or, as he puts it “imploring some people In ever met to pressure a government with better things to do to punish an innocent man for doing something that nobody saw.” And this Kent Brockman accident surely counts.

So Ned gets a wave of complaining Christians to start making a huge deal about Kent’s profanity, and the shit hits the fan. Kent learns that this issue has caused him to be demoted to weekend weatherman, the station is being investigated, Arnie Pie is getting his old job, and finally that Channel 6 is getting a $10 million fine from the FCC. This primarily takes the form of Krusty having to provide the voices for Itchy and Scratchy, making it all about Itchy mad that Scratchy slept with his wife. Oh, and they decide to fire Kent.

This leads, for no reason, to Kent coming and staying with the Simpsons, as long as he provides them with a picture for their wall of random acquaintances that have stayed with them. Because I guess being fired means Kent lost his house? Whatever, he starts living with them and has to sit around with Homer while he watches terrible Fox News. This results in Lisa wondering why Fox shows such dumb and racy television, while Fox News is so insanely right-wing.

Kent explains that it’s all an elaborate con, which is probably accurate. Basically, Fox puts on shows that it knows will get them in trouble with the FCC so that the Fox conglomerate can funnel money to the GOP. This shocks Lisa, who decides Kent should start a YouTube channel and tell the world the truth. So they hook up a webcam and Kent gets all Edward R Murrow, smoking and telling the world how things really work. And this infuriates the local Republican party, who decides to fix things by offering Kent his old job back, with a pay raise, and he accepts, his journalistic integrity gone. The episode then ends with the goofy joke of Homer and Lisa trying to tell the viewer the awful truth of Fox, which gets dubbed over.

From what I can tell, this episode wasn’t meant to be the 400th episode. The 24 parody should have been, and that would have made a whole lot more sense, because at least that episode was weird and unique. This episode is just so completely average. I mean, it’s the typical “random townsperson loses their job because of a member of the Simpsons family, and have to come live with them.” Except this one is so truncated and rushed. I feel like this episode could have been really interesting if they had cut basically all of the long and winding first act, and had most of the episode be based around Kent becoming some sort of counter-culture voice of the people. That could have been really interesting, giving Kent Brockman more depth and showing his love of truth. But instead they just shoved that into the end of the last act, before rapidly ending. The idea of the FCC taking down a show because of accidental profanity is okay, but I really think that this episode focuses on the least interesting aspects of the plot. It had some real potential to be unique and interesting, making it a better fit to be the 400th episode, but whatever, I don’t write this show. As it stands this is an episode that’s just kind of okay. But hey, we have something fantastic in store tomorrow!

Take Away: Fox, and everything it touches, is shady as hell and not to be trusted.

“You Kent Always Say What You Want” was written by Tim Long and directed by Matthew Nastuk, 2007.