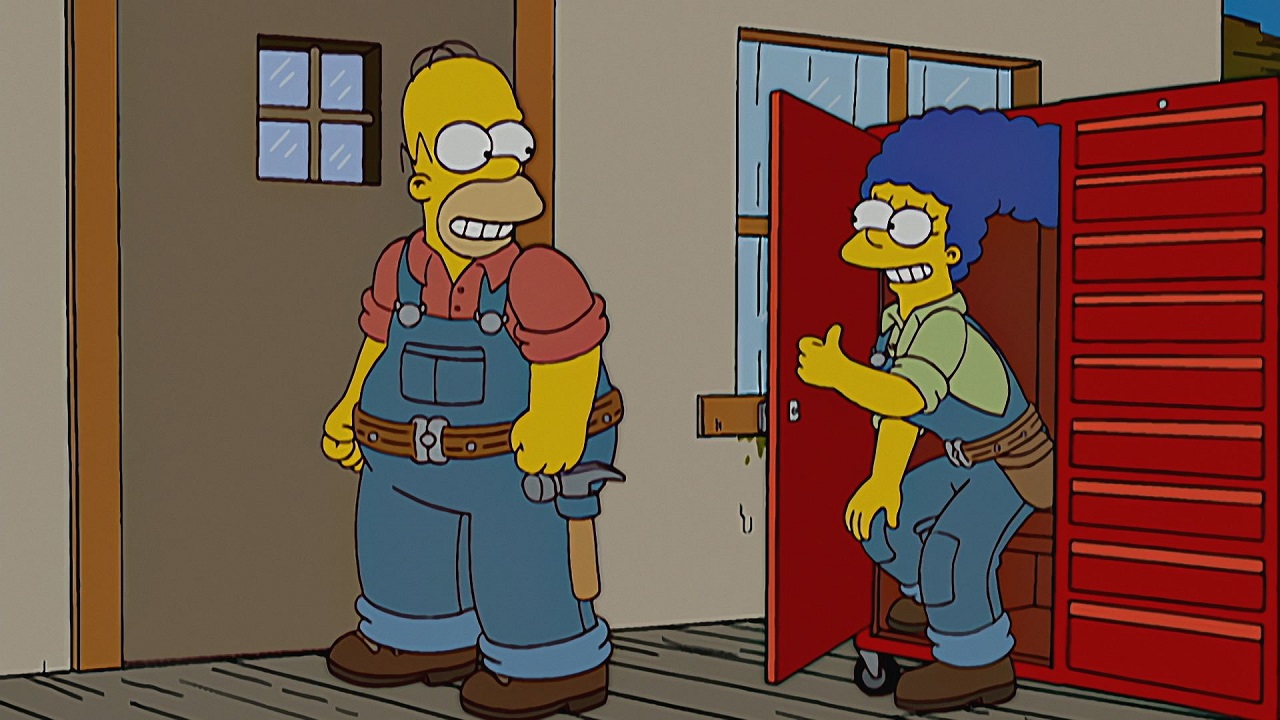 Yesterday we got to start the week off on a pretty positive note. And the rest of the week has some pretty good episodes. Today? Well…it’s unique. Is that a compliment? I don’t know, I guess we’ll have to figure it out by the end of the article. Let’s see!

The episode starts off with the family heading to a depressingly empty mall, checking out the sad husk that’s been left behind. There’s really no good stores anymore, and it’s primarily just candle kiosks, Persian CDs, and an arcade with terrible old games in it. We also get to see Homer buy a massive wad of ancient gummy worms, which he then just stuffs into his mouth, since he’s a cartoon after all, and can do horrible stuff like that.

But something actually starts to happen when the family checks out some sad little book store, and check out the minimal selection. And one of the only things that the store does have is a collection of books that help people learn how to be a better carpenter. Marge tells Homer that he should buy the books, so that he can be more handy around the house, and he surprisingly does it, promising to start fixing things.

So the family head home, and Homer quickly puts the books away, never to use them again. Meanwhile, we learn that there’s going to be some weird things going on at Springfield Elementary, because an unnamed student has some horrible peanut allergy, and therefore all peanuts and peanut products are banned from entering the school. Which really pisses off Bart, whose lunch was primarily peanut based.

Once the kids leave the house though, Marge realizes that the entire place seems to be falling apart, and she would love it if Homer would be handy and fix things. Homer refuses though, so Marge is forced to get the books herself, and try to fix the house by her lonesome. And she actually does great. Marge is a bit of a natural when it comes to carpentry, and is quickly able to fix both a floorboard and a bedside table.

And once she has some success, she just can’t stop. Marge starts pouring over the books, learning all there is to know about carpentry, while she starts to make more and more impressive things. It even reaches the point that she decides she could become a professional carpenter and start a business. This proves impossible though, because the idiots of Springfield just can’t seem to wrap their minds around a woman building things for them, and just keep refusing her.

Apparently the people of Springfield are expecting a big fat guy to be their handyman, and balk at the idea of Marge being able to help them. So Marge comes up with a pretty great idea. She’s going to have Homer pretend to be the handyman, get contracts, and then she’ll fix and build the things. And, it works out pretty great. The people of Springfield love her work, and Homer is getting all kinds of praise for his work.

Hey, let’s check back in on the peanut thing! Bart hates it. He’s pissed that they can’t have peanut products anymore, and really wants to figure out which kid is responsible for the ban. So he follows Willie one day when Willie steals all of the peanut products from the kids, and ends up finding the true source of the allergy. Principal Skinner. He’s apparently deathly allergic to peanuts, which has never come up before, and Bart now has an ace up his sleeve when dealing with Skinner. Threatening him with death.

But enough of that for a while, let’s see how Homer and Marge are doing. Not well! Marge’s satisfaction for a job well-done is starting to fail, and she’s starting to resent the fact that Homer’s getting all of her praise. Especially when people start straight up mocking her, and telling her how handy her husband is. And it all comes to a head when Marge overhears Homer telling Lenny and Carl how great he is, saying that he’s doing it all himself and he’s just naturally talented.

Marge confronts Homer about this scam, and tells him that she’s sick of it, and wants to tell everyone the truth. But Homer has no interest in that, since he’s loving getting all of the praise while doing none of the work. He also mentions that revealing the truth may cause issues because he’s just accepted a contract from Mayor Quimby to repair some huge roller coaster in town. And this is the last straw for Marge, who announces that she’s no longer going to do all the work. 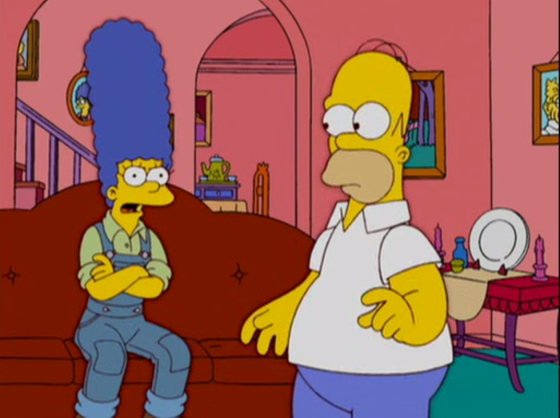 But before we see how that plays out, let’s just finish off that Bart plot. He starts being an asshole around school, knowing that he can threaten Skinner with anaphylactic shock. And, surprisingly, Skinner allows these threats, even getting to the point that Bart starts making him do horrible things all around town, like going in and messing with Comic Book Guy. But while he’s in the Android’s Dungeon, he learns an important lesson about kryptonite.

Skinner decides that he needs to rebalance the scales, and find some kryptonite for Bart. Which causes Skinner to break into Dr. Hibbert’s office in the middle of the night, and find Bart’s medical records. And while in there he finds that Bart also has a horrible allergy, shrimp. So Skinner gets a shrimp, puts it on a stick, and goes to war with Bart. The two begin squabbling, and end up having a Revenge of the Sith style fight all around town, until they both land in a vat of peanut shrimp, defeating them both.

So they’re dead. Moving on! Homer is trying to fix the roller coaster himself, and he’s doing terrible. He scares off all the real contractors, and is having to do it all himself, while knowing nothing. Lisa tries to help him by telling him that if he apologizes to Marge and gives her credit, she’ll help. But Homer ignores that advice, and just keeps going ahead with his terrible repairs, right up until the date that he’s supposed to be done.

There’s a huge ceremony for the grand reopening of the roller coaster, and Marge has shown up to support Homer. Which is a good thing, because instead of admitting that he’s a fraud Homer just goes ahead with everything, and hops on the coaster himself to show that it’s safe. Which it is not. Homer almost dies, but Marge springs into action and fixes the coaster in real time, keeping Homer alive. So, the cat is out of the bag, Homer admits the truth, everyone is proud of Marge, and Homer is sent to the hospital from the horrible injuries he sustains from the coaster, sharing a room with Skinner and Bart. 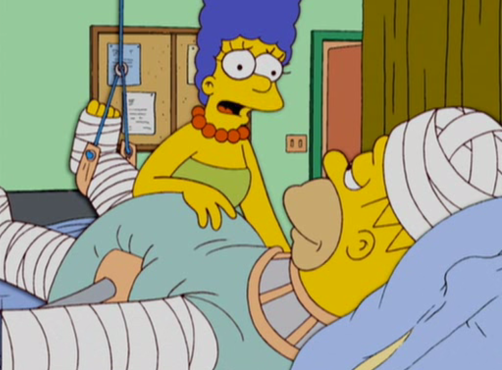 This is an interesting episode, but I’m not sure if I really like it. I really dislike the B-Plot with Bart torturing Skinner with death, but not enough to ruin the rest of the episode. Honestly, the premise is pretty great, and unless I’m forgetting something, it’s pretty unique. I can’t think of another episode where Homer is taking credit for Marge’s work. It’s kind of like the episode when Homer becomes an artist, but it’s still different. Actually, it’s kind of similar to yesterday’s episode, with Bart getting praise for things that Lisa is interested in. Except for this episode has Homer being a complete asshole, and seemingly spiting Marge on purpose. Homer just seems like a complete shmuck all episode, and it does end up rubbing me the wrong way by the end.

Take Away: Women can do everything men can do, and they shouldn’t need men to legitimize their talents.