Howdy folks, and welcome back to another week of Lifetime of Simpsons. And it’s a weird one. We’re going to end Season Seventeen, begin Season Eighteen, and there are some actually interesting episodes in here. A couple turds too, but hey, we get what we can get. So let’s start off with an episode that’s tossing around some really interesting concepts. If it succeeds in turning those concepts into a decent episode remains to be seen though. Let’s get to it.

The episode starts off with a really weird gag that goes on way too long. The family are going to check out the premiere of a new musical based on Itchy and Scratchy. It’s basically a parody of the Lion King Broadway musical, and it’s basically just a mixture of African aesthetics and Itchy and Scratchy killing each other. It’s not a terrible gag, but it last way longer than it needed to. Although I do adore how awkward and terrified Marge was at the prospect of one of the actors participating with her.

However, when the musical is finally over we get to see why we had to watch it. It turns out that the director of the play is from Springfield, and was basically Lisa back in the day. And, for reasons that are not explained, Principal Skinner comes up on stage to give her flowers and talk about how great a student she was. He also mentions that she did bad in math, and then casually explains that that was because she was a girl, and thus inferior at math.

This does not go well. People are aghast at Skinner’s comment, and he ends up doubling down on his statement because he’s just so flustered. And this causes a snowball that starts rolling down the hill. Groups of women begin standing outside of the Elementary School, protesting, and Skinner has no idea what to do. So Chalmers shows up and tells Skinner that he has to have an assembly and try to bridge the gap and fix things.

He does poorly. Mainly because his big idea was to cross dress and say that that means he can understand the plight of women. Yeesh. And, shockingly, this does not go well. But apparently Chalmers was expecting that, because he immediately announces that Skinner is being fired and he’s being replaced by a woman named Melanie Upfoot, who’s marketing herself as a feminist, but is actually kind of crazy, and she announces that she wants to split the school between the genders, and have a boy side and a girl side. But it helps Chalmers look good, so she gets the job.

That night the kids talk with Homer and Marge about the split, and it leads to an uncomfortable conversation where Homer starts to act super sexist and claim that men are superior to women in every way. But that doesn’t really go anywhere, so we head straight over to the new school, where things are really weird. They’ve split the school in half, and the two halves couldn’t be more different. The girls get art, clean rooms, and encouragement, and the boys are basically living in a post-apocalyptic hellhole complete with fires and junkyard dogs.

Oh, and the girls are also not actually getting an education. Lisa’s new class is actually being taught by Upfoot, and it’s all about getting your emotions in tune with numbers, and not actually about learning math. Which really starts to bother Lisa. She understands the importance of confidence, but she also wants to learn. So she does something rebellious, and decides to sneak out of the girl side of the school and pop into the boy side to see if they’re learning. And they are, and she’s incredibly jealous.

So Lisa heads home to complain to Marge about how sad she is she doesn’t get to learn math. Which is when we get a flashback from Marge where we learn that she used to really be into math, until Homer drew her away from it. Marge doesn’t want Lisa to have to give up math like she did, and she decides to help Lisa with a plan to learn. Which is to dress Lisa up like a boy and have her infiltrate the boys side of the school. 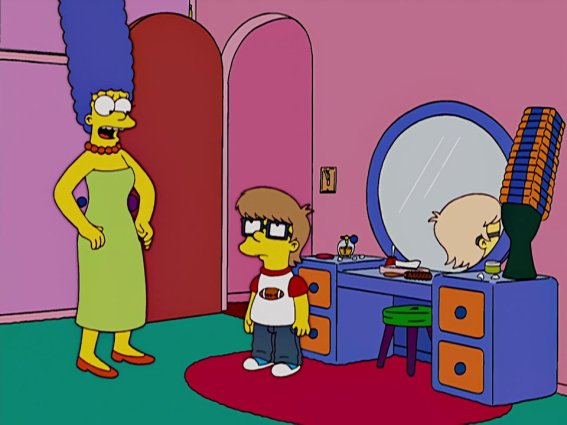 The next day Lisa puts on her costume, and heads into the mysterious world of boys, which is mainly just punching each other. She also decides that her name is Jake Boyman, although everyone decides to start calling her Toilet, so that name sticks. But it doesn’t matter, because she’s getting to learn math! Basically everything else about the boy side of the school is terrible and she hates it, but math! Although things do take a turn when Lisa accidently gets in a fight with Nelson, and gets beat up.

And that day Bart comes home from school, eager to tell Lisa all about Nelson beating up some lame new kid, when he finds her in the costume and realizes what actually happened. And, just like that, Bart is on her side and decides to help train her on how to actually be a boy so that stuff like this won’t happen and she can continue to enjoy math. However that does seem a little difficult when Bart explains that her first task is to fight someone weaker than her, and it has to be Ralph.

But Lisa gets through the horrible feeling up punching Ralph, and actually gets accepted into the tribe of boys. She basically becomes just one of the guys, and is excelling in math so well that she gets an award for excellence. And when she goes up to receive the award she decides to shake things up, and reveal her true gender. And everyone flips out. Lisa explains that this proves girls can be good at math, and that she’s gotten a newfound appreciation for the struggle boys have to endure in their hyper-masculine society. And then the episode just kind of peters out. I guess everything goes back to normal. 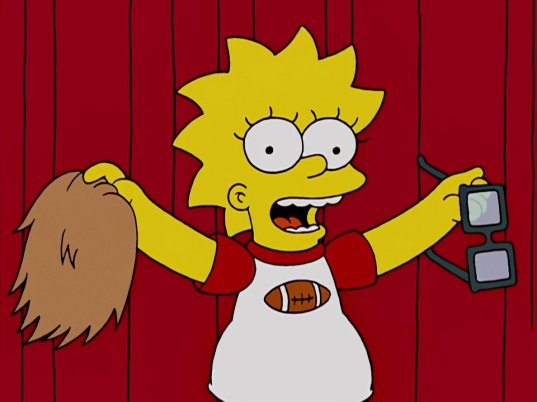 I actually liked this episode quite a bit. There are certainly some issues that I feel like would have been ironed out if this was a premise tackled in the Golden Age, but I still really liked it. The episode had some interesting things to say about sexism, gender politics, and the weird life that young boys lead. I love that Lisa wants to learn so goddamn bad that she does something so ridiculous to accomplish that. It’s just such a Lisa idea. I would have liked it if the episode did a little more with Upfoot, who just became this weird villain who hated boys and wanted to punish them while not actually teaching girls. I’m not sure what was with her. I’m not sure if she was a reference to some topical person I’m forgetting, but she was just a weird an unpleasant character that was nothing more than an afterthought. But her inclusion wasn’t enough to spoil this episode, and the solid morals that it imbued.

Take Away: Gender norms are ridiculous, and we can be whatever and whoever we want to be.

“Girls Just Want to Have Sums” was written by Matt Selman and directed by Nancy Kruse, 2006.

Tagged as: 2006, Girls Just Want to Have Sums, Lifetime of Simpsons, Season 17, the Simpsons