I’ve been pretty down on the Simpsons this week. It’s just been a bit of a cavalcade of mediocre to actively bad episodes, and I’ll be honest, it’s been a little draining. This is the point in the show when I tapped out as a fan, and it’s legitimately hard sometimes to force myself to watch five episodes of this show a week. But then I get weird little nuggets like this episode. I have no idea why, and it may be some sort of Stockholm Syndrome, but I kind of adored this episode. Let’s try to figure it out!

The episode starts off with the Simpsons heading to the local Carl’s Dad’s Cavern for a family afternoon of geology. They wander around the cavern for a while, with Bart complaining about being on a nature walk, until they find a giant stalactite that seems to be the big draw of the cavern. So of course Homer decides that he needs to take a chip of the stone as a souvenir, and tries to hammer some off.

This causes the stalactite to collapse, and knock a huge hole in the ground, sending the Simpsons down a put that spits them out in a secondary cavern that seems untouched by humanity. Well, except Homer, he gets stuck in the hole, trapping him upside down. And when Lisa realizes that the chamber isn’t on the map Marge and Bart decide to go try and find a way out while Lisa stays behind to keep Homer company.

And instead of just sitting there in awkward silences, Lisa decides that she should keep Homer occupied by telling him a story. It all starts with Lisa going on a nature walk in the woods outside Springfield, when she has a chance encounter with a mountain goat. And this goat seems to be insane, because it immediately tries to attack her, chasing her through the woods until she ends up at the only close-by building in which she could hide. Mr. Burns’ mansion.

Burns is the only person in the mansion, and he’s pretty angry about Lisa suddenly showing up at his house, until the mountain goat shows up and tries to attack him too. That leads to Burns and Lisa running through the mansion, trying to escape the goat until they get to the attic of the mansion, which is the only place that the goat can’t get into. Burns explains that Smithers is gone for most of the day, so they settle down to hide in the attic, and Lisa starts snooping.

Burns’ story begins with him being at some sort of club for Springfield’s elite. It seems pleasant and stodgy, until the newest member shows up. The Rich Texan. His boisterous nature doesn’t really fit in with the rest of the club, and Burns ends up arguing with him. And the argument quickly reaches the point where they decide they need to have a duel. But because Burns doesn’t want to get shot, they make an arrangement for a different kind of duel. They’re going to have an insane scavenger hunt, and the winner gets all of the loser’s property.

So the two men begin running around Springfield, collecting a wide variety of nonsensical items, until it all boils down to the last item. A picture of the millionaire with a smiling child. Which is where Mr. Burns hits a roadblock, because children find him horrifying. He tries to get pictures on a school bus, but all the children, and Otto, just seem terrified. So Mr. Burns loses, the Rich Texan gets all of his property, including the Plant and Smithers, and Burs has been left destitute.

Burns begins wandering the streets of Springfield, depressed, until he finds a help wanted sign at Moe’s, and gets himself a new job as a bar boy. Which appears to just be him getting yelled at by Homer, Lenny, and Carl. However, Burns’ fortunes change when he’s cleaning one day, and finds a mysterious letter under Moe’s pickled egg jar. He pops it open, and reads a secret will that Moe has written with its own story inside.

Moe’s letter claims to be about a treasure that he obtained, and it’s location. But first we learn about the fact that when Edna Krabappel first came to Springfield after leaving her husband, Moe was the first person she met. Moe decided to lie to her, and tell her that he was a councilor for alcoholics, to try and get in her pants. And it works, the two begin having a lovely summer together, dating and falling in love, all while Moe is somehow keeping the fact that he owns a tavern secret from her.

It even reaches the point that Moe decides he’s going to close the bar, sell it, and go start a new life with Edna. And right on time, some money falls into his lap. Because as he’s working in the bar one day he gets a surprise from a visiting treasure hunter, who turns out to be the man we know as Snake. Apparently he used to be an archaeologist, and he has a sack full of Mayan gold. He also appears to be a rube, so Moe manages to trick him and tell him that the museum is closed for the day, and that he should stay in the hotel across the street.

So that night Moe sneaks into Snake’s hotel room, and steal the gold, forever putting Snake down a life of crime. Moe now has the money to get him and Edna out of Springfield, and the two get ready to flee the town forever. All Edna needs to do is go to the Elementary School and tell them she wont be working there after all. However, when she goes inside she runs into Bart, who claims to have detention all summer. He gives Edna a sob story, and ends up convincing her that she should stay behind and be his teacher. Which turns out to all be bullshit, and was just his scam to keep her occupied while Nelson stole microscopes.

But the damage is done, and Edna tells Moe that she wants to stay behind and be a teacher, ending their plan. To which Moe responds by flipping out and breaking up with her, acting like a psychopath. Moe then goes back to his bar, and spends all night putting the gold coins in his jukebox, playing their song. So he has a jukebox full of gold. Which Mr. Burns them immediately steals, as soon as he learns about them. Burns then heads to the Rich Texan, and buys back all of his worldly goods. But the Texan has one stipulation before giving him back the Plant. He still wants a picture of Burns with a smiling child.

Which brings us back to Lisa and Burns in the attic. Lisa has been fascinated by the story, and while they’ve been sitting there the goat has somehow managed to get itself into the attic. At which point Burns puts himself in front of Lisa, taking the attack from the goat. Unfortunately this was a needless act, because it turns out that the goat isn’t evil, it’s just been trying to return Lisa’s necklace to her, which she dropped in the woods.

But Burns was still a hero to her, so Lisa does him a solid and takes a picture with him, while she smiled. So Burns heads back to the rich people club, and gets his Plant back, putting everything back in order. Which is when we get back to Homer trapped in the cavern. He loved the story, but he has a slight confession to make. He intentionally got them down into this secret cavern, because he knows about the treasure.

It turns out once the Rich Texan got the gold coins from Burns he took them to this cavern to hide them, instead of putting them in a bank. And it just so happened that Homer was outside the cavern when it happened, so he knew about the gold and planned this outing just to steal it. Which is when all hell breaks loose, because everyone shows up for the gold. The Texan, Mr. Burns, Moe, and even Snake all show up in the cavern, ready to have a Mexican Standoff for the gold.

That is until Marge decides she’s had enough of this nonsense, and she grabs the gold and tells them she’ll drop it off a cliff. And after they agree to do so, she decides she still is going to get rid of the gold. Everyone horrified, until they decide that they can all go volunteer at a youth center, which will be a better use of their time. Except Mr. Burns, last we see of him he’s scrambling down the cliff, trying to get the gold while everyone else leaves.

I don’t know what it is about this episode, but I like it a whole lot. It may be because I’ve had such a rough time lately, and finally having an episode that wasn’t a total drag made me over compensate and consider it a good episode, but I think it’s actually just a lot of fun. We get to see into the lives of a bunch of different side characters, and it almost had a “22 Short Films About Springfield” kind of vibe about it. I liked seeing the nesting doll story structure, and I think all of the stories were fun, especially leading to the ridiculous Mexican Standoff in the cavern. I don’t know if I’ll really remember this episode that well, or if my appreciation for it will be fleeting, but I had a pretty great time with it while I watched it, and that’s got to be worth something.

Take Away: If you’re being chased by a goat, it probably is just returning lost belongings.

“The Seemingly Never-Ending Story” was written by Ian Maxtone-Graham and directed by Raymond S Persi, 2006. 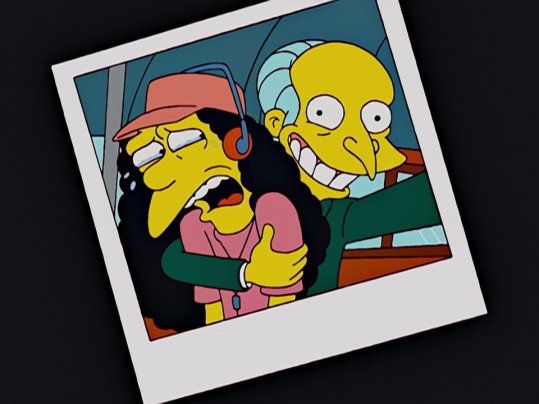 Tagged as: 2006, Lifetime of Simpsons, Season 17, The Seemingly Never-Ending Story, the Simpsons