S16 E10 – There’s Something About Marrying

Hi there folks and welcome back to another fun-filled week of Lifetime of Simpsons! Things are really all over the place this week, and our opener this week is actually really apropos for the rest of the week. Because this episode is a real roller-coaster of quality. There are some parts that were really interesting and progressive for the time, and others that really shocked me for…other reasons. Let’s get into it!

The episode begins with Bart and Milhouse setting up a prank on some poor alcoholic. They’re set up a trap where if someone picks up a bottle of Duff on the sidewalks a big watermelon will come crashing down on their heads. So they wait in a bush and watch as Barney comes closer. I can’t really keep track of Barney’s status as an alcoholic anymore, but apparently he’s no longer sober, because he goes right for the beer and manages to jump over the trap, escaping without the humiliation.

Which really bums Bart and Milhouse out. Everyone in town is just too used to their hijinks, and they decide what they need is some fresh meat. And just on cue some random dude shows up on the back of a turnip truck, ready to explore Springfield. He introduces himself as Howell Huser and he’s a dopey and kind-hearted guy who asks if Bart and Milhouse will show him around Springfield. And this is obviously too good an opportunity to pass up.

Bart and Milhouse start taking Howell around town, and doing everything they can to make his visit terrible. They just keep lying to him and pranking him, slowly driving him crazy. They even take him to the Nuclear Power Plant where they claim that ‘radioactivity’ means a place they listen to the radio, and get him beaten up by some Blinky monster. But the thing that really sets Howell off is when they offer him some gun, and it’s a rat trap that smashes his finger. He flips out, shames the town, and leaves in a huff, never to return.

However disaster strikes when it turns out Howell Huser is some sort of reporter for one of those frivolous morning “news” shows where he tells people about small towns. And he has some choice words for Springfield. He rants and raves and ends up giving Springfield his lowest rating ever, which has some fast and disastrous results on Springfield’s tourism. No one wants to go to the town now, and they obviously hold a Town Hall meeting.

Mayor Quimby opens the floor to insane guesses like always, and after some fun ones we get a real suggestion from Lisa. That Springfield legalizes gay marriage and becomes a beacon for gay rights. And surprisingly the rest of the town is super on board. They don’t hold a referendum or anything, I guess Springfield politics just work on applause-meter standards, and just like that gay marriage is legal and Springfield starts catering to that market, specifically marketing itself as the perfect place to get married.

There is a slight roadblock though when droves of gay couples show up to get married. And that’s the fact that Reverend Lovejoy is being a huge dick about it all, refusing to actually perform the marriages. Which leaves a big opportunity for someone to make some money. Obviously that someone is Homer. He goes online and gets ordained to perform weddings, sets up a little chapel in his garage, and gets his business going.

And business is booming. Homer starts marathoning weddings and quickly marries every gay couple in town, running out of clientele. But Homer really liked the money he was making from the weddings, and decides to open up his specialty and starts to perform weddings of all kind. And people love it. Homer starts performing weddings like crazy, and is even brought on Smartline to talk about the implications of this rash in weddings. But Homer stands up for all marriage rights, despite the fact that he really only cares about the money, and he gets to continue performing them.

Which is when a wrinkle shows up. Because one day while everyone is in between weddings the family gets a visit from Patty. She’s requesting that Homer perform her wedding, and Marge loses her mind, super excited about the prospect of her sister finally getting married. That is until Patty tells her that she’s marrying a woman named Veronica. Yep, Patty has just come out of the closet, and Marge is stunned, despite a lot of clues that get dropped on us through flashback.

But Marge is able to push some of her hypocrisy behind her, and invites Veronica over to dinner to get to know her. So Patty and Veronica shows up and we learn that she’s a professional golfer who met Patty during an insane golf accident. However, despite the fact that Veronica seems lovely, Marge just keeps acting weird about the wedding until Patty finally snaps. She’s pissed that Marge has been so accepting of gay marriage until it was someone in her family that came out, and calls her a hypocrite, which makes Marge even angrier. And the two keep fighting until Patty explains that if Marge doesn’t come to the wedding she’ll disown her.

So the wedding day quickly approaches as Homer gets ready for the ceremony, Patty and Selma have a nice little heart to heart where they get ready for their new lives, and Marge continues to fume. However, as Marge is wandering around the house angry she accidently walks in on Veronica in the bathroom. Which is where we get the insane reveal that Veronica is actually a man pretending to be a woman, and Patty has never found that out. And because Marge is the straight worst in this episode, she decides to keep that information to herself for now.

The ceremony then begins, and Marge shows up at the last second, getting a smile from Patty. Marge apparently plans on not telling Patty that Veronica is a man, and keeping that secret until their wedding night, which I guess she thinks will be super funny for her and not incredibly crushing for her sister. But that horrible plan comes to an end when Patty reads her own vows, which are all about truth and honesty, and Marge can’t take it anymore.

During the whole “Does anyone object” part of the ceremony Marge stands up and says that she can’t let the marriage pass. Patty is furious at Marge at first, until Marge outs Veronica and we get the truth. Apparently Veronica is just a guy who wanted to be on the female PGA, so he pretended to be a woman. And when he fell in love with Patty he decided to keep that lie. Which is when he asks Patty if she’ll still marry him as a man. And she refuses, because that’s fucking insane. Patty explains that she’s a lesbian, and kicks Veronica out. And after a wonderful joke where Lisa says that Homer will no longer have a marriage business after this week, we see Patty and Selma return to their sad life.

Yeah, this is a weird one. I know I’d seen this episode before, but I didn’t have that great of a memory of it, and I certainly didn’t remember how incredibly unpleasant Marge is throughout. The idea of the Simpsons tackling gay marriage in 2005 is pretty great, and I’m really happy to see that it was a largely positive look at it. Other than Lovejoy everyone seemed really down with gay marriage, even though it was mostly out of an economic incentive. And honestly I like the idea of Patty coming out and having this issue with Marge. I don’t like to see Marge as someone who is fine with gay marriage in theory, but not in practice when it’s her own sister, but Marge is traditionally a more conservative character than she thinks, so I’ll buy that. I think that conflict is interesting and probably really truthful. I’m sure that happens a lot in real life. What I don’t like is how wretched Marge becomes after that. She’s a total hypocrite, and apparently is going to keep the shocking revelation behind Veronica to herself in order to humiliate Patty? That’s seriously the worst thing I’ve ever seen Marge do in this show. Plus, the reveal of Veronica is so strange, and feels like while this episode was okay with gay marriage it was still pretty creeped out by trans people. Although I’m eternally grateful that they had Patty reject Veronica at the end on not figure “eh, close enough” as if he sexuality was frivolous. That would have been a huge bummer. But all around it’s a very uneven episode with some really great premises, but those are balanced out with some genuinely terrible character beats.

Take Away: Love is love. Let people marry and love whoever they want as long as it’s not harming someone else. And don’t be hypocrite if you support gay marriage but not if it’s someone related to you.

“There’s Something About Marrying” was written by J Stewart Burns and directed by Nancy Kruse, 2005. 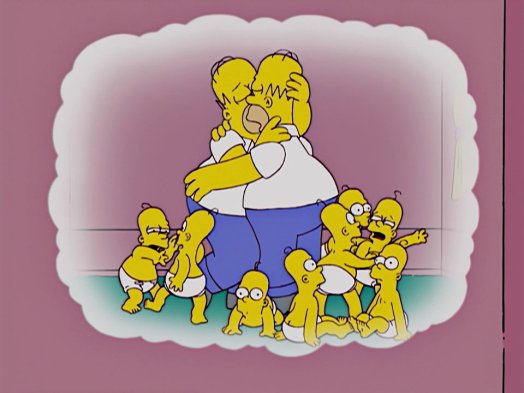 Tagged as: 2005, Lifetime of Simpsons, Season 16, the Simpsons, There's Something About Marrying