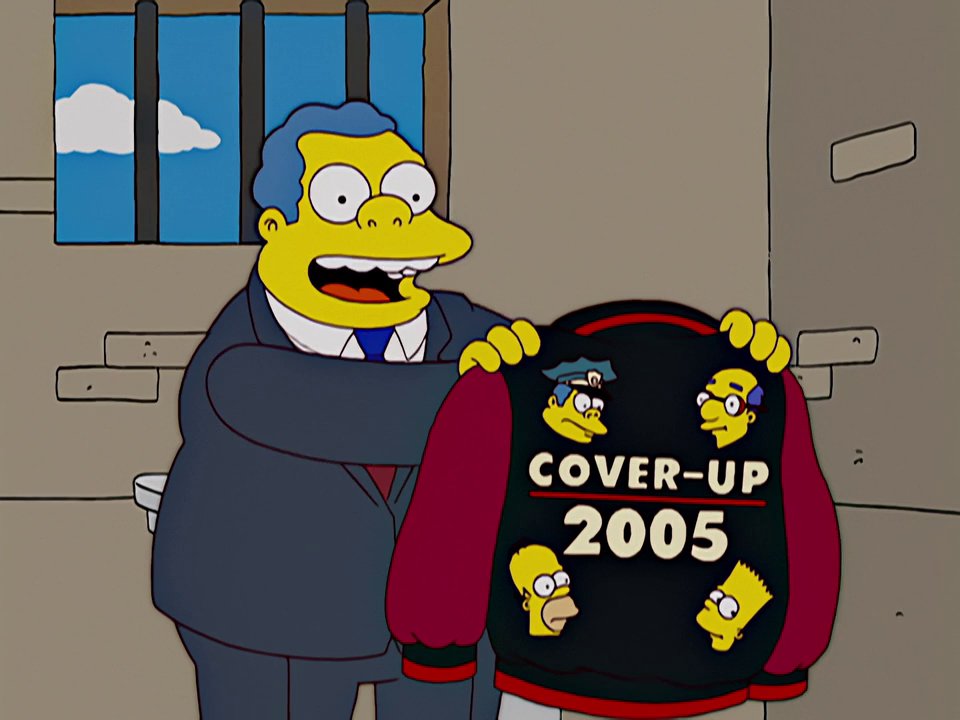 It’s been a hell of a week here on Lifetime of Simpsons. We’ve had some real clunkers, which seems to be pretty emblematic of the era of the show that we’re in now. So what better way to end the week than to have an episode that I barely remembered, and that easily could have been super offensive. That’s right, let’s have the Simpsons learn about rap!

The episode begins with Homer watching college football and just zoning out, until Santa’s Little Helper eats the remote, and hijinks ensue. Every time Santa’s Little Helper barks the remote changes channels, since this show is a cartoon, and we get to see Homer dealing with rapidly changing channels, as he slowly goes mad. Homer ends up chasing the dog through the house before getting stuck in a doggie door, which results in Patty and Selma finding him and giving him a makeover, because once again, this is a cartoon.

But while Homer is stuck in the doggie door the rest of the family show up and start watching the channel that the TV ended up on. And it’s apparently some version of BET, and is showing some news about rappers. And Bart instantly starts acting like he loves rap, and starts using all of the slang, just like so many other chubby little suburban white kids. Which Lisa begins mocking him for furiously. But Bart doesn’t really care, even though Lisa continues to heckle him about rap in a matter that befits a middle-aged person. So…the writers.

Bart isn’t going to give up on the sudden interest in rap, and even tricks Homer into allowing him to buy a ticket to some rap festival called Murder 4 Life. Unfortunately when Marge finds out that Bart bought the ticket, she flips out. And the only way to express that feeling is by doing a terrible rap that feels like it came straight from a middle school motivational assembly. And it’s embarrassingly terrible. And basically just revolves around the idea that rap is garbage and shouldn’t be listened to.

So they tell Bart that he’s not allowed to go to the festival, despite the fact that he bought the ticket himself. Which obviously results in Bart sneaking out, disobeying his parents, and going to the show himself. Where he appears to be the only ten year old white child, but whatever, he somehow scored front-row center seats, so he gets a hell of a show. But things are about to get utterly insane in a way that I was not expecting.

Because as the rapper Alcatraaaz is performing he accidentally drops his mic into the crowd, and right into Bart’s hand. He then for some reason encourages Bart to start rapping. Which he does. And folks, this crowd of rap enthusiasts lose their goddamn minds about the stream of conscious rap delivered by this ten-year old kid who just learned what rap was the other day. Bart’s rap is a huge hit, and he even gets a shirt and a ride home with Alcatraaaz. We also get a weird cameo from 50 Cent, but just for like two lines, and then he peaces the hell out of the episode. 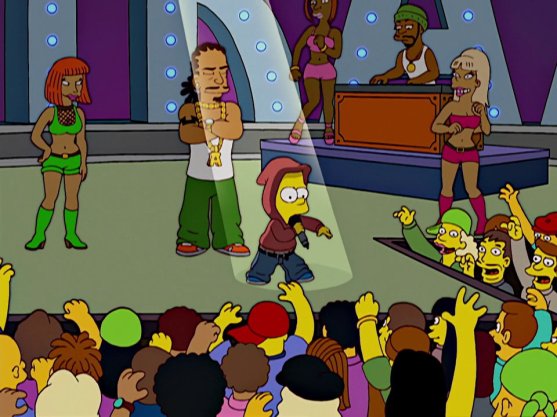 So Bart gets home, stoked about his impossible evening, but things aren’t great at the house. Right before he walks in the door he hears Marge and Homer talking about the fact that Bart has snuck out, and how much trouble he’s in. And Bart doesn’t really want to be in trouble, so he decides to do something insane. He fakes a kidnapping! Because it worked so well for Homer and Larry Burns. So he hucks a rock with a ransom note into the window of the house, and flees to the treehouse.

And obviously, things escalate. Kent Brockman shows up to interview the Simpsons who are incredibly distraught over the fact that their child was apparently kidnapped, which leads to the whole town becoming worried. Especially Milhouse, who is incredibly depressed. So Bart decides to take pity on his best friend, and reveals his entire plan to Milhouse. And Milhouse decides to play along with the insane plan, and tells Bart that he can hide out in Kirk’s apartment, because the cops would never look for him there. That shouldn’t backfire!

While all of this is going on though, an unexpected plot element is arriving. The media is obsessed with Bart’s disappearance, but they also start to mock Chief Wiggum’s inability to do basic police-work. Things even get to bad that Wiggum has a crazy fantasy where he’s visited by Barney Fife who convinces Wiggum to actually give a crap for once and be a competent police officer. So Wiggum really starts to take things seriously, and even takes a recording of a phone-call that Bart makes from Kirk’s apartment to perpetrate the lie.

But Wiggum isn’t done. He brings the recording back to the lab, and begins analyzing the recording like he’s Gene Hackman in the Conversation, until he finally stumbles upon something. There’s a sound in the recording that appears to be a specific type of stove-top popcorn called Chintzy-Pop that he likes. So Wiggum heads to the Kwik-E-Mart and learns that only two people buy that brand, him and Kirk. Wiggum, Eddie, and Lout then burst into Kirk’s apartment, find Bart hiding there, and the shit hits the fan. 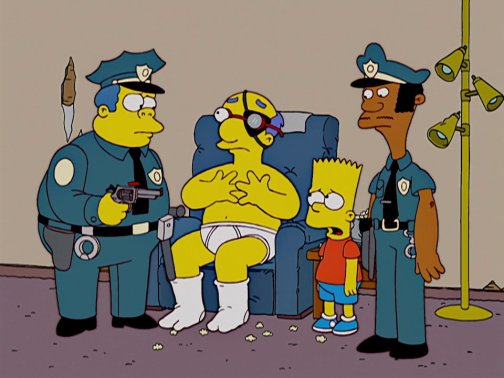 So Bart is reunited with his parents, Wiggum becomes a hero, and Krik is sent to prison since Bart doesn’t want to admit what really happened. And it quickly begins to wear on Bart, who heads to Wiggum to confess everything. But when Wiggum hears the truth he decides to keep it quiet. Wiggum has been promote to Police Commissioner and is a hero, so he doesn’t want the truth to get out. Plus, Kirk is loving prison now that crazy women want to sleep with him, so it’s really in everyone’s best interests that they keep it quiet.

Unfortunately one day Lisa is hanging out in the backyard and notices something odd up in the treehouse. It’s the shirt from the Murder 4 Life tour, proving that Bart went to the show and wasn’t actually kidnapped. She tries to tell Homer about her discovery, but he burns the evidence, since he’s sold the rights to Bart’s story for a made-for-TV movie, and also doesn’t want the truth getting out. But Lisa won’t give up.

She for some reason decides to then go talk to Principal Skinner, and get him the help her in her crusade against Bart’s conspiracy. The two begin investigating, which really gets Wiggum and the rest of the cabal concerned that they’ll uncover the truth. But they feel confident that Lisa won’t be able to find someone who can provide irrefutable proof that Bart was actually at the show, and not being kidnapped.

And right on time we see Lisa do just that. She and Skinner decide to go to the mansion of the rapper Alatraaaz, and ask him to show them footage of the show that night. He has that for some reason, and he shows them the footage of Bart rapping, along with proof of what time and date it occurred on. They have Bart busted! Which is right when Wiggum and the rest of the cabal show up to silence them. That leads to an insane Mexican Standoff between the rappers and the cabal, but things end up getting fixed and everyone decides to just live with the lie. Because house parties are better than the truth I suppose. 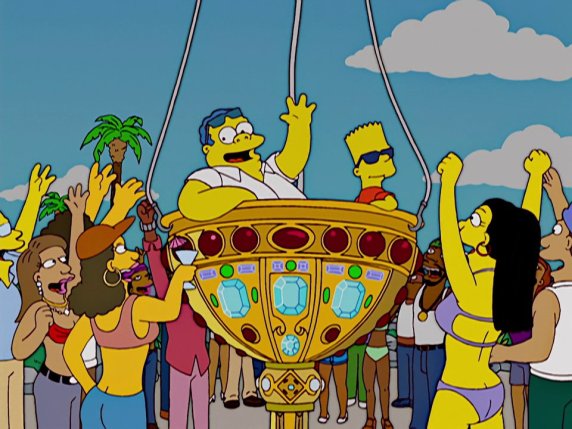 This episode is really weird. Like I’m not sure how to feel about it. I was really worried in the first act that the episode was just going to be about rap, and how much the writers don’t like it. Which would have been a serious bummer. Don’t get me wrong, I’m not a huge fan of rap unless it’s about the Federalist Papers, but that’s just because it isn’t my thing. I have nothing against the genre or the people who like it. But this episode really seemed to take the stance that rap was a dumb fad. Which is a weird stance to take in 2005 and not like, 1989. I mean, they seriously have a part where a ten-year old white kid raps just as well as a professional, as if there’s no skill or talent involved, and anyone can do it. C’mon Simpsons writers, it’s not like they’re DJ’s! But thankfully the episode didn’t dwell too much in the rap world, and ends up instead looking at this insane network of lies and stupidity instead. Which I do kind of enjoy. It’s just so insane that it’s hard not to like. Plus, I’m all on board for Chief Wiggum suddenly becoming competent, that was a great turn. It’s just a really uneven episode that seriously hampered by the insane first act and it’s weird “Old Man Yells At Cloud” style of “commentary” on the rap genre.

Take Away: It’s super easy to set up a network of lies, as long as everyone benefits.

“Pranksta Rap” was written by Matt Selman and directed by Mike B Anderson, 2005. 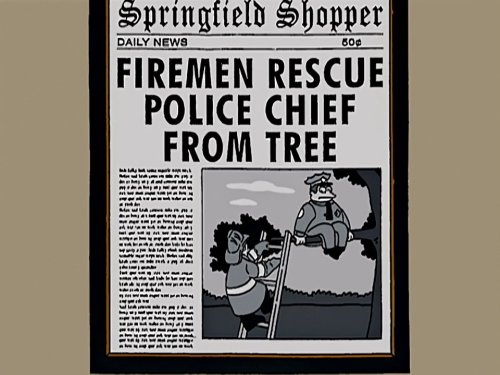