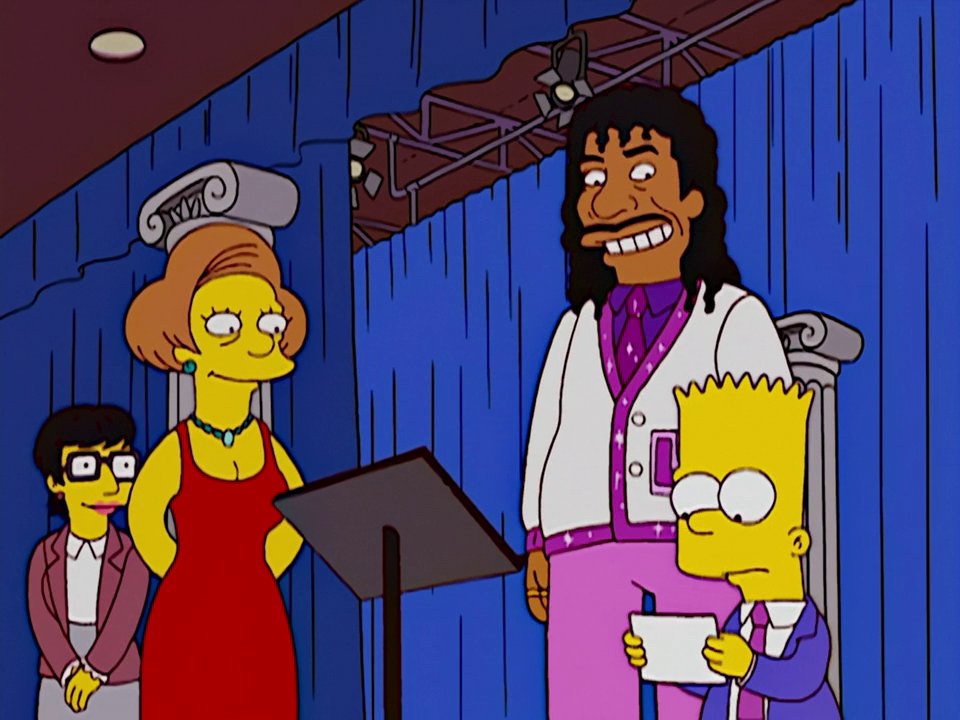 You know who we haven’t focused on in a while. Mrs. Krabappel. She was never a character like Apu that inexplicably got an episode a season, but we used to check in more frequently on her sad life, and her relationship with Skinner. But it’s been a while, so let’s jump into this passable episode!

Things start off with us learning that the fourth grade students are about to write papers about World War I, and start arguing about which war that was, and if Merlin was involved. But after establishing that Merlin fought in Vietnam, they leave and we see that Edna is getting ready for a romantic trip to pick apples with Skinner. But, to establish a theme of the episode, Skinner shows up to tell her he’s bailing on the date to be with Agnes instead. What a wiener.

Anyway, Bart heads home to get ready to write his paper, and instantly starts submitting to distractions instead. He watches some ridiculous wrestling match all about beating up Osama bin Laden and he goes to the library to study only to find a Xerox machine with 99 free prints on it, tempting him to make copies of his butt for church. Hell, he even thinks about reading about algebra instead of writing his essay. Which is ridiculous. World War I is fascinating.

But Bart’s just bad at this, and ends up spacing on the whole assignment, until he ends up having to resort to desperate measures the day that the paper is due. He asks Grandpa about the War. Which results in Grandpa telling a story about him joining the war by lying about his age, and fighting as a toddler. And as you can guess, he gets an F on that paper. So he has to stay after school and rewrite the paper with Edna, trying to do better. 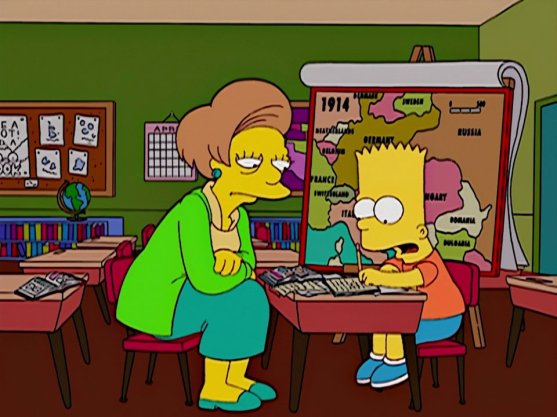 And while he’s in there writing with her, Skinner comes in to talk. Skinner is flirting with Edna, and coming up with a new date, but ends up getting a phone call from Agnes and immediately bailing. Edna is clearly devastated, and Bart decides that he has to do something to help her out, and offers to hang out with her that night. Which isn’t creepy at all. So the two head to an IMAX theater and watch a movie about holes, having a pretty good time.

This obviously leads to everyone making fun of Bart for having a date with his teacher, but after mocking him a bit Lisa recommends that Bart submit Mrs. Krabappel for a Teacher of the Year award. So Bart records a little video about what makes Mrs. Krabappel special, and it basically just consists of her doing her job well. Oh, but it turns out the committee have somehow heard about how terrible Bart is, so they decide to accept her nomination since she’s somehow managed to teach him.

So a little ceremony is held at the Elementary School where Edna is formally nominated for the big award, and she shocks Skinner by thanking Bart instead of him. And Skinner gets even more confused when he starts to realize that the praise Edna is getting may mean that she’ll leave the school. So he butts in and starts giving a speech about how great Edna is. Unfortunately he gets a page from Agnes, and ends up ending the whole damn ceremony. Not doing so great Seymour. 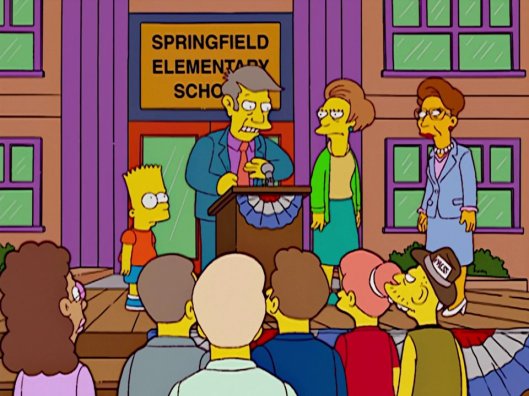 The awards ceremony is in Orlando, so Edna heads out, along with the whole Simpsons family, who get to go because Bart nominated her. So they head to the lackluster Epcot center, and get to goof off for a while before the awards. Lisa and Marge get to see Eastern Airline’s vision of the future, where they’re a monolithic company that rules humanity and Homer and Bart go see an electric car display which is sponsored by oil companies and is pitiful.

But while everyone is having fun, we see Skinner decide to head to Orlando and win Edna back. So he borrows Willie’s crazy spy car and drives across the country to save his relationship. Unfortuantely when he shows up to sweep Edna off her feet, it turns out he’s brought Agnes along with him. So that’s the final straw. Edna yells at him and ends up dumping him, causing him to sleep in Epcot for some reason instead of the hotel room he rented.

And that dumping has driven Skinner a little crazy. He sneaks into a meeting before the Teacher of the Year awards, and hears the teachers discuss that if they win they’ll have enough money to quit and never teach again. He gets really concerned he’ll lose Edna forever at that point, and goes to make a deal with Bart. He blackmails Bart by threatening to spread that he’s a teacher’s pet in the school, unless he purposefully bombs the show and ensures Edna doesn’t win.

That night the awards ceremony begins, to a mostly empty theater, and things get going with their master of ceremonies, Little Richard. We skip right to the Teacher of the Year award, and see that the kids that nominated the teachers have to ask them once last question. And when it’s Bart’s turn, he pretends that he can’t read, and that it’s all Edna’s fault. But as everyone s horrified, Skinner realizes he can’t let this continue, and heads up to the stage to set the record straight. And propose marriage. Edna is floored, and agrees, getting engaged. Oh, and she loses the award to some rando. But hey, at least they’re engaged.

Edna Krabappel really is a sad character. But she tends to have really great episodes. I don’t think I’ve disliked a single one of the episodes that revolve around her, and while I don’t really love this one, it’s fine. I think that despite the fact that she’s typically portrayed as kind of checked-out, when they really focus on her she’s a good teacher, so it was nice to see her get some recognition. But the issue with this episode for me is the Skinner stuff. Skinner is a complete asshole in this episode and barely does anything to redeem himself. He treats Edna like crap, and then gets all depressed when she dumps him, so he just proposes and that fixes everything? I don’t recall them ever actually getting married, but maybe I never made it that far, so I guess there’s a chance things will fall apart still, as they should.

Take Away: Don’t treat your girlfriend like crap, and don’t assume that proposing fill fix any relationship problem.

“Special Edna” was written by Dennis Snee and directed by Bob Anderson, 2003.

Tagged as: 2003, Lifetime of Simpsons, Season 14, Special Edna, the Simpsons