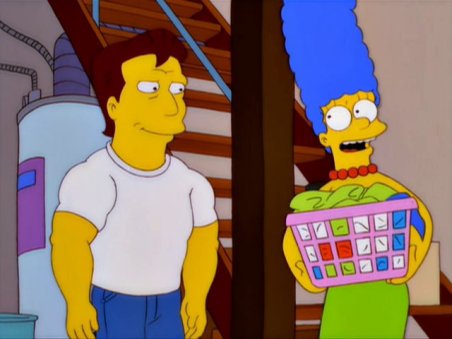 It’s a big day folks. No, not really because of the episode. It’s okay and has some fun Michael Keaton action, but that’s not the important part. Today is July 28, my birthday, which mean this project has been going for a year now. Holy shit. Other than a couple time I’ve missed I’ve had one of these posted every weekday for a year. This is the 258th episode! I’ve had 258 articles about the goddamn Simpsons! And I’m not even halfway through! I’m excited, but a little horrified that I haven’t even reached the peak of the journey. But whatever, let’s move on and get going with a pretty fun Marge episode.

Things start off with Marge nagging Homer about taking her to some sort of apron expo. Which sounds pretty thrilling you guys. And despite Homer’s complaining, she convinces him to go, so the whole family heads out to check out aprons. Luckily we aren’t then barraged with several minutes of sight-gags relating to aprons, and just cut straight to them driving home, with aprons, when the real plot gets going. Because on their way home they pass a sign for a prison rodeo, and you better believe the Simpsons have to check that out!

So the Simpsons head into the prison and go to some sort of stadium that the prison has for some reason. And from there it’s basically just convicts being forced to participate in rodeo games, seemingly against their wills. And after some average rodeo stuff we see a convict named Jack who is going to try and ride a bull. But the bull knocks him off, breaks his arm, and starts running around angrily. Marge freaks out, and Homer decides he can fix things by pissing the bull off with Lisa’s red dress. Unfortunately this works too well, and the bull attacks Homer, jacking up his back, and spooking a guard into shooting tear gas at the audience.

So Homer’s taken to the prison infirmary to get his back checked out, and while he’s complaining Marge starts wandering around with the wounded convicts, and finds a cool painting of Jimi Hendrix. She talks to Homer about it, and is shocked when the Warden says it was painted by the Jack guy from earlier, along with several other painting around the infirmary. The Warden has nothing but bad things to say about Jack, but Marge can’t help but think that there must be a sensitive soul somewhere in there, based on the art.

So the family heads home, and Marge just can’t get Jack out of her head. She knows that he has talent, and wants to help him out, so she heads to the prison to start teaching art classes. Which doesn’t go great, since the prison will only let them paint sauerkraut lit by light through bars. But Jack is doing great, and is painting some wonderful stuff, and his continuing charm just keeps pushing Marge to believe that he’s a good man.

Oh, and Homer’s back is still hurting him. So he heads over to Dr. Hibbert’s and learns that Western medicine has no idea what to do about back pain, and just tells Homer to check out a chiropractor. So Homer goes a meets with Dr. Steve the chiropractor, and gets his back cracked, giving him some minor relief. So he signs up to start coming back to Dr. Steve for future adjustments.

But back to the main plot, Marge has decided to speak at Jack’s parole hearing, and even bakes some cookies to woo the parole board. Which doesn’t go that great. They still think that Jack is a scumbag, even though he’s in prison for shooting Apu, which is just a fine now, and even Apu says he’s a good guy. But the Warden decides to call Marge’s bluff, and releases Jack into her custody. Which doesn’t really seem like something a Warden should be doing, but what do I know? 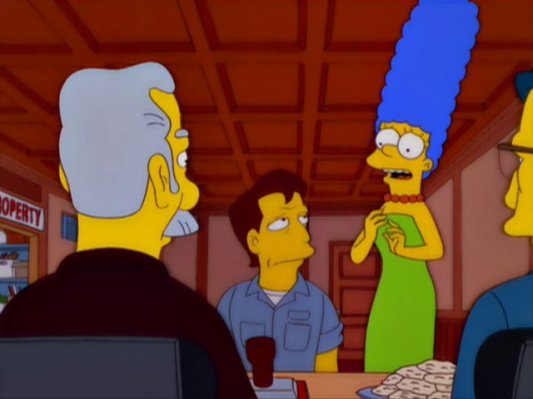 So Jack comes home and becomes like the fiftieth person to live in the Simpson’s basement. We also get the amazing Mecca joke from him:

Marge: “I hope this is okay. It’s not very prison.”

Jack: “It’s more than I deserve, ma’am. Now, which way is Mecca? Cause I got to do a little praying.”

Solid. Anyway, Jack start making himself at home as Homer realizes that his back adjustment isn’t working anymore since he’s in stabbing pain while raking leaves. But he makes an amazing discovery when he fall over, and lands on the trashcan, and is shocked to see that stretching his back on the cylinder has fixed whatever was wrong. He’s a genius!

And because Homer’s always out to find a way to get rich, he decides to go into business and start his own little clinic in the garage where he just pushes people over his trash can in the hopes that it fixes their backs. And shockingly, it’s doing great, and he’s getting a lot of business and happy customers. So that’s good I guess.

Meanwhile, Jack is still looking for a job, and Marge thinks she’s found the perfect thing. Turns out Springfield Elementary is looking for someone to paint a mural for them, and Marge gets Jack an audition, while neglecting to mention that he’s an ex-con. But issues spring up immediately, because Jack decides to essentially paint a badass heavy metal album cover, and it’s not what Skinner wants. So Skinner forces him to paint some cutsey bullshit, which isn’t making him happy.

But before we see the end of that plot we quickly jump over to Homer to see the ridiculous ending of his silly side-plot. He’s hanging out with Moe, trying to fix his back, when two “investors” who up wanting to buy Homer’s designs. But when Homer starts thinking about it, they steal his trash can, and flee, revealing themselves to secretly be chiropractors. So Homer and Moe run out to stop them, only to see them and Dr. Steve destroying the can with plastic spines, and then flee into the night.

Anyway, we cut over to the ceremony unveiling the mural, and shockingly, everyone is disappointed with the cute thing Skinner asked for. Everyone turns on it, and Skinner even shifts blame to Jack, who starts to snap. And then later, coincidentally, the mural suddenly catches fire, leaving Jack the main suspect. Skinner is pissed, and becomes even more angry when Marge lets it slip that Jack was an ex-con.

So everyone starts to look for Jack, and Marge ends up finding him hiding in the playground, saying that he didn’t cause the fire, and that no one will believe him. So Marge decides to cause a distraction, letting him run away, but is then shocked to find him lighting Skinner’s car on fire. And when he tried to tell Marge that he didn’t burn Skinner’s car, she realizes he’s crazy, and has Chief Wiggum arrest him and take him back to prison. Where he’s treated to a weird conversation about HBO shows. 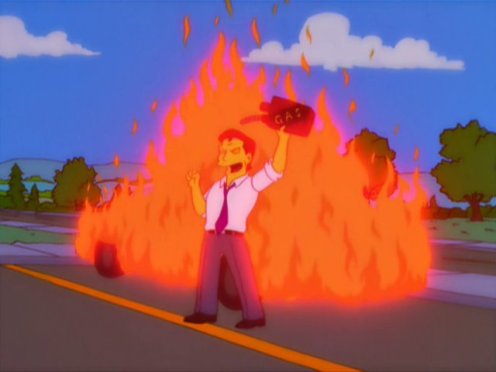 This was a fun little episode. I’m always a fan of episodes that revolve around Marge, and aren’t about how shitty the family are treating her. I’ve always loved the idea that Marge has a passion for art, and I feel like it’s never properly exploited. But this one really worked for me. Marge is totally the type of person who would see someone with art talent, and think that they’re misunderstood and have something more going on in their life. Because she knows she has artistic talent and is a good person, so everyone with that talent should be good. Unfortunately it doesn’t really pan out for her, but I don’t get the idea that she’s going to become jaded or anything for this story. It just worked great for me. Plus, the Homer plot was silly and fun, and led to a great Chinatown homage, which is always welcome. It was just a really fun episode, and an interesting one to land on for the year anniversary of the project, and I look forward to venturing into the Dark Ages and the Unknown Ages with you all.

Take Away: Some people just suck, chiropractors are shady people, and if you put your mind to something you can accomplish a monumentally goofy task.

“Pokey Mom” was written by Tom Martin and directed by Bob Anderson, 2001.