Welcome back to Bat Signal folks, and look what we have here, another first encounter with a prominent villain. We’ve pretty much hit Batman Rogues Gallery Bingo here on this project, and I’m really excited to get my first Two-Face story, because he’s honestly my favorite Batman villain of all time. Yeah, Joker is more famous, but I think the personal trauma between the two characters works so beautifully. And this is some great Two-Face. Honestly, this is a pretty great issue, because it deals with a bunch of interesting topics that I haven’t run into yet in this series. Yeah, I’m looking forward to some crazy Golden or Silver Age Two-Face stories in the future, but this one was pretty great as well. So let’s dive on in!

The issue starts off with a man waking up in a disgusting little flop-house, with little memory of what’s happened to him, and bandages on his face. He removes the bandages, only to find that he’s Two-Face. The signature suit with the silver dollar is also a dead giveaway. So Two-Face realizes that he has to make up for lost time, and heads out to start a new stupid crime spree based around the number two. I’ve mentioned before that I really love some of Batman’s villains crazy obsessions, and while a lot of them end up ditching them as time goes on, Two-Face is still proudly committing insane crimes around the number 2 well into the eighties. However, his obsession seems to be a little muddled in the beginning, because we open up on him robbing a party for a sculptor. He runs around with his crazy two-barreled gun and his twin henchmen and robs all the rich folks at the party. Luckily Batman and Robin seem to randomly be passing by, and spring into action to fight the villain. Robin has to fight the lady twins while making odd comments, while Batman drops a great James Bondesque pun while beating up the male twins. 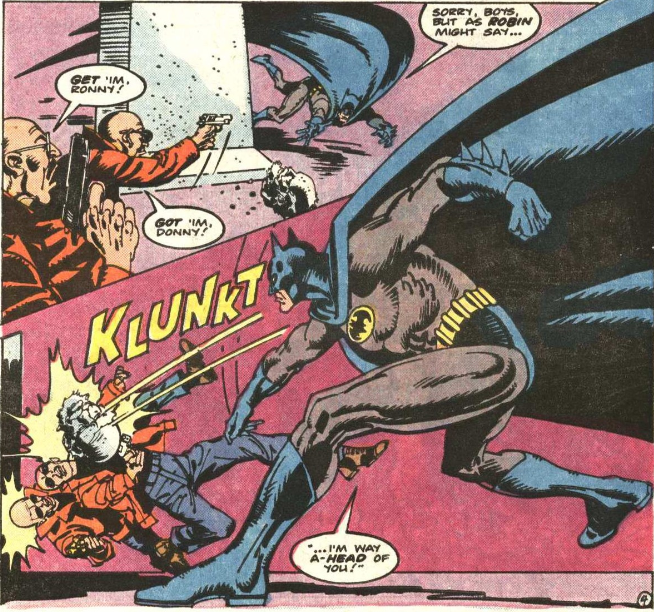 And once the henchmen are taken care of, the two chase after Two-Face, only to have Robin run ahead and almost get himself killed. Two-Face grabs him, and hold a gun to his head. Robin’s able to use Batman’s need to keep his sidekick safe to escape. And after a moment or two Batman is able to chase after them, and finds Robin knocked out, and they commiserate about Two-Face getting away. And it was at this point that I finally realized that this was good old Jason Todd. So far I had just kind of assumed any time I’ve seen Robin, he’s been Dick Grayson. And honestly that may be the case. But here we go, Jason Todd, the Robin that comic book readers of the late eighties gladly voted to get blown up in a warehouse and killed. And I also realized that I really don’t know that much about Jason. He mentions in here that Two-Face killed his father, giving him a particular bone to pick with Harvey, and I don’t even think I knew that. He’s a very odd character, and it’s interesting to see him at this point in the series, where his imminent doom is so close. I’m curious if they knew by this point that he was going to be killed off.

But that’s enough rambling about Jason Todd. He and Batman have a quick heart to heart where Batman basically just tells him to get his shit together, and they head over to have a pow wow with Commissioner Gordon. While there they talk about Two-Face’s robbery of the sculptor’s exhibit, and his robbery of some sort of meeting of impressionists. Which isn’t really jiving with Two-Face’s whole obsession. And with no other leads, they just kind of head off into the night, presumably to roam the town. Which they do, and somehow quickly find that Two-Face and his goons are hiding out in a mirror factory, which is such a Silver Age gag, and I love it. Anyway, Two-Face explains that his crimes have revolved around people who make doubles of things…which, I guess. Why not. But after that explanation Batman starts beating up Two-Faces goons, while some other guys are getting ready to throw Robin into a vat of goddamn molten glass!

Jesus, that’s harsh. It doesn’t work though, we know Jason had a much grislier fate awaiting him. He gets away from the goons and runs into Batman, who has also taken down his appointed goons. Unfortunately they’re too late to stop Two-Face, who easily sneaks out from the two heroes, hops in a two-toned car, and drives off into the night. Batman is pissed, and makes a call to Commissioner Gordon to see if he has any leads. He doesn’t but he does mention that there’s a missing man named Paul Sloane, which causes Batman to freak out. Robin doesn’t really understand why, so Batman lets him know about the sad story of Paul Sloane. Turns out he’s a local actor who was hired to play Harvey Dent in some sort of made for TV retelling of Dent’s rise and fall. But tragedy strikes in the courtroom scene, when a jealous prop-guy switched out the fake acid with real acid, replicating Two-Face’s accident, and giving birth to a second Two-Face. They then sent Sloane to a psychiatrist and gave him surgery to fix the face, and he was presumably cured. But now he’s clearly been re-scarred, and is back to thinking he’s really Two-Face.

At this point a weird revelation is made where Batman essentially tells Robin that the Two-Face who killed his dad wasn’t actually Two-Face, and things get a little confusing. But that revelation doesn’t really matter, because they just hang back to Wayne Manor and start hanging out. And while having breakfast together the next morning, they come up with a new plan, which involves having Gordon plant a fake story in the newspaper about a train full of two-dollar bills being shipped to the Gotham treasury. And obviously, that ends up attracting both Two-Faces. Batman and Robin show up at the train-yard that the fake treasury train was supposed to be, and square off against the Sloane Two-Face and his goons. Which is going pretty well, that is until the Harvey Dent Two-Face shows up with his own goons. And it was at this point that I really wished they pulled a “Homey the Clown” and had the two Two-Faces try to pull a switcheroo and do the whole “no, I’m Harvey Dent” thing. But that isn’t what ends up happening. Instead, while Batman is busy giving Harvey Dent shit and messing with his mind, Fake Two-Face takes the opportunity to just shoot them all with tranq darts. And while they’re all asleep Sloane Two-Face then decides to kill three birds with one stone, and tosses the three of them in a refrigerated train-car that will freeze them to death, and a bomb. Double death! Oh, and that’s the end of the issue. Yep, cliffhanger! Who knows how long it will take to reach the second half of this story, but I do have a prediction. Batman wins. 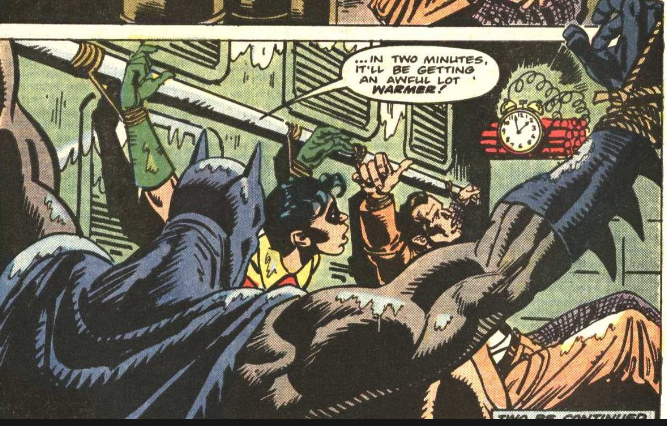 I really liked this issue a whole lot. Even though it was from the late eighties it had a really similar feel to the crazy Silver Age comics that I’ve been loving on this project. Seeing Batman and Robin running around town doing their damndest to stop Two-Face with some basic detective work is great, but the real draw to this issue was the two things that were new to this series. Seeing Jason Todd for the first time was interesting, mainly because this may be the first Jason Todd comic I’ve ever read.  And honestly, I kind of got the whole hatred thing. I’ve never been a huge Robin fan (except Tim Drake, he’s awesome), but Jason Todd was pretty quickly obnoxious and unlikable. Dick Grayon has run into some stupid mistakes in the issues I’ve read, but Jason just seems mean-spirited and hot-headed. Which aren’t really good qualities for a Robin. And besides Jason, I really love Two-Face, as I’ve explained, and it was pretty interesting to learn that he has this weird doppelganger with the exact same backstory. I also really enjoyed the fact that the issue ends with Batman, Robin, and Harvey locked in a freezer car. I’m sure that they all get out of it just fine, but I think it would be hilarious if the next issue was primarily just the three of them sitting around, hashing out their differences while Sloane runs around town doing his best to be Two-Face. That’s probably not what really happens, but I can dream.

“Double Image” was written by Mike W Barr and drawn by Jim Baike, 1987. 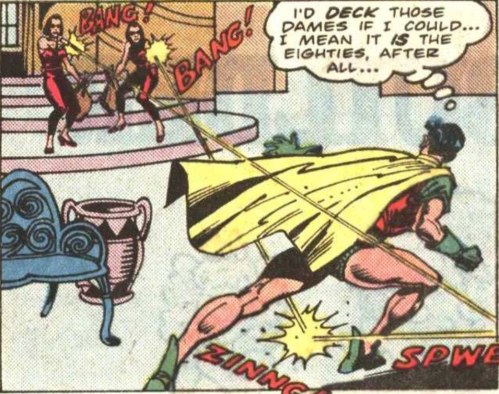