Hey everybody! It’s time for fake ID’s, grammar rodeos, Winnipeg, purple fruit and Marlon Brando’s Island! Did that sentence seem like gibberish? Then read on!

This silly episode starts off when Principal Skinner is preparing for his spring break trip to Hong Kong, when he notices a slight discrepancy that has him leaving the day before the break actually begins. He calls the airline and finds that it would be a lot of money to change it, so he decides to close the school a day early by making all the kids go to “take your kid to work” day. And let me tell you, those days really do seem to be designed to just give teachers a day off while kids have to awkwardly meet their parents’ coworkers and sit around even more bored than usual for a day. And once the kids get home they split up who will go with who, and Lisa ends up having to go to the Plant with Homer, while Bart plans to stay at home and watch cartoons while watching Marge. But Lisa has the last laugh when she points out that since Bart wants to see women in the workplace, he should go be with Patty and Selma at the DMV, which Marge thinks is a great idea. So it’s off to the DMV with Bart.

So Bart goes to the DMV with his horrible aunts, Lisa goes to the Power Plant, and we briefly see that Milhouse got to go to the cracker factory where his dad works, and it’s basically Willy Wonka’s chocolate factory, but for crackers, and looks like a blast. And right off the bat Lisa isn’t really having a lot of fun, since she and Homer don’t typically have that much in common. Although it does lead to the wonderful interaction of:

Lisa: “No thanks. Do you have any fruit?”

Homer: “Uh…this has purple in it. Purple is a fruit.”

Which is just spectacular, and is something that I still quote at a shockingly regular degree. We also get a little foreshadowing when Homer shows off the map of the country that shows every other nuclear power plant in the country that he has for some reason. And even though things were awkward at first, Lisa and Homer start to actually have fun when they start goofing off together. They put on radiation suits and spin around on chairs, and just generally start to have a good, and adorable, time.

But the real plot gets going when we briefly see that Martin has made $600 during his day with his father in the stock market, and when we see what Bart has done at the DMV. While Selma is busy laminating Cleetus’ driver’s license, Bart uses the machine to make his own license, with his age listed as 25. So the next day Bart goes and shows off the fake ID to Nelson and Milhouse, who decide to go do all sorts of fun things that come along with being an adult. Like going to see Naked Lunch at a theater, and trying to drink beer at Moe’s. But when Moe’s just ends up depressing them, they leave, and run into Martin who starts flaunting his money, even though Milhouse tells him that they don’t need another nerd in the group. But the four start spit-balling, and they realize what they have to do for their spring break. They rent a car!

So the four ten-year olds start driving around town, since Bart knows how to drive a car for some reason, and decide that they should go on a road-trip. So Bart creates an air-tight alibi, that all four of them have been selected to go to a National Grammar Rodeo at the Sharaton Hotel in Canada, because apparently there’s only one up there. So the kids tell their parents, except Nelson who just leaves, and they begin their roadtrip. Milhouse finds a AAA travel guide in the glove compartment, and start flipping through it to get ideas. But while that’s going on we get the really cute scene where Homer is bored at work, and calls the house to talk to Lisa, after briefly disappointing Marge who thought he was calling to talk to her. So Lisa comes to work with Homer again, and the two keep having fun and bonding.

Back at the roadtrip, the boys pull their car over when they realize they headed out without a destination, and start debating where to go. And when Milhouse finds an article about the World’s Fair in Knoxville, Tennessee, they quickly agree that that’s the best bet, and head off to Knoxville. We’re then treated to a silly montage of things that they do while driving, like getting ice cream, weighing the car, picking up a creepy drifter, and getting him ice cream too. There’s also a hilarious scene where they pass a disgruntled family who are going on vacation to Cape Canaveral, and Nelson reaches over and smacks the angry father, who decrees that they’re turning around and going back to Winnipeg, which is such a dumb joke, but it makes me laugh so much.

And while all of this is going on, Homer and Lisa are having a lot of fun together. They break into a candy machine, and bribe Smithers into looking the other way, and decide to have a sleep over together when Homer has to work some sort of night shift. There’s also a really sad scene where Lisa just peaces out, and leaves Marge alone with Maggie, but that’s quickly undercut with how adorable it is that Homer and Lisa are having a sleep over. They make a fire in his office and have sleeping bags while playing truth or dare, which ends with Homer getting her to admit that she has a crush on some boy named Langdon Alger. It’s just so cute. 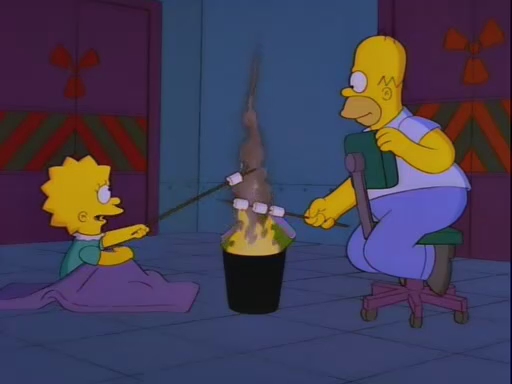 There’s a funny scene in the road-trip plot when the kids end up going through Branson, Missouri, which Bart describe as “Las Vegas if it was run by Ned Flanders,” and they’re forced to stay and watch Andy Williams by Nelson, who is apparently a big fan. But after that detour, they make it to Knoxville, only to find that the Wod Fir has seen better days, since the fair ended more than a decade ago. There’s nothing there except a wig store, and when the kids are forced to buy some wigs, and Martin buys a talking Al Gore doll, they realize they’re out of money. And right as they start to panic, Nelson throws a rock at the giant Sunsphere that was in the fair, and it knocks over and destroys their car, trapping them in Tennessee.

So with no other options left, Bart calls home, and after once again hilariously disappointing Marge, he talks to Lisa. He admits that the Grammar Rodeo was a fake, and explains the situation to her, and makes her promise not to tell the parents. She starts brainstorming, and the best idea she has for getting them all home free would be for Bart to use his fake ID to become a courier. And that works, so Bart goes off on his first courier job, which is to deliver eyeballs to Hong Kong, where he’s spotted by a confused Principal Skinner. But when he gets back to Springfield, he realizes this could take forever, especially since his next job is taking 800 Big Macs to Marlon Brando’s island, so he asks Lisa to come up with something better.

Lisa then goes to work with Homer again, but is clearly upset about something to the point that even Homer notices. So he gets her to break her promise, and she just lets everything lose, telling Homer everything. Which leads to the hilarious scene of Homer putting on his radiation helmet and swearing so much it fogs up the glass shield. But he agrees to help Bart out, and the two decide that they need to order something large enough that they could smuggle Martin, Milhouse, and Nelson inside, and they decide that they need a new computer consol that Homer uses for his job. So they use that map from earlier and call a Nuclear Plant that’s near Knoxville and order a new consol, after Homer sabotages his perfectly fine one. So Bart gets to come home, and the other kids come too, although Bart makes them get crammed in a box they don’t need to be. And when he gets home, Bart keeps up the lie about the Grammar Rodeo, which pisses off Lisa and Homer, but just makes Marge proud, so they keep the lie up. And the episode ends with the hilarious scene of Homer and Marge in bed while Marge gets phone calls from Skinner who asks about Bart being in Hong Kong, the Knoxville police department who want to question Bart about the car accident, and the courier guy who asks if Bart is available to work more, and while she gets increasingly confused Homer just starts to giggle. 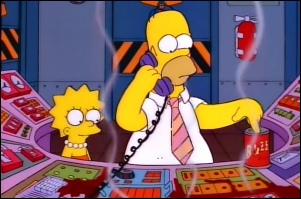 What a fun and silly episode. Both plots are so strong, and work together beautifully. The B plot with Homer and Lisa having fun “working” together is so freaking adorable, and serves as a mini Lisa episode, without having any big conflict between the two, we just get to see this cute father/daughter team bond and have fun with each other, which was really refreshing. And that road-trip plot is just so great. I love those four boys and the weird dynamic they make, and just the idea of four ten-year olds renting a car and driving to a poorly researched destination was so much fun. This is some peak Simpsons here.

Take Away: Plan out your road-trips.

“Bart on the Road,” was written by Richard Appel and directed by Swinton O Scott III, 1996.

Tagged as: Bart on the Road, Lifetime of Simpsons, Season 7, the Simpsons