Welcome to Season Fourteen everyone! And you know what that means, it’s time for some Halloween goodness! You have to love Treehouse of Horror episodes, and this is a pretty fun one. Plus, they come so close to having a wraparound plot, which kind of irritates me […]

Happy Monday and happy Halloween everybody! Plus, welcome to Season 13! We’ve officially been through 12 years of this show. Which is ridiculous to me. But I’ve yammered about that enough, so let’s just dive into a Treehouse of Horror that starts off with a super weird […]

Well folks, we’ve made it through another week, and another season. We’re officially in Season Twelve. So let’s start things off with a Treehouse of Horror episode that didn’t air until after Halloween, and isn’t that great! And after starting off with a weird Munsters parody opening, […] 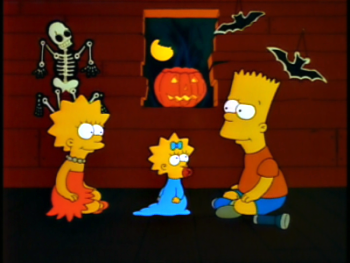 Oh man. Halloween episode! I love these so much. I mentioned in my intro post that the first episode of the Simpsons I ever watched was a Halloween one, and I’ve always had a deep affection for them. I feel like it’s going to be a little hard […]