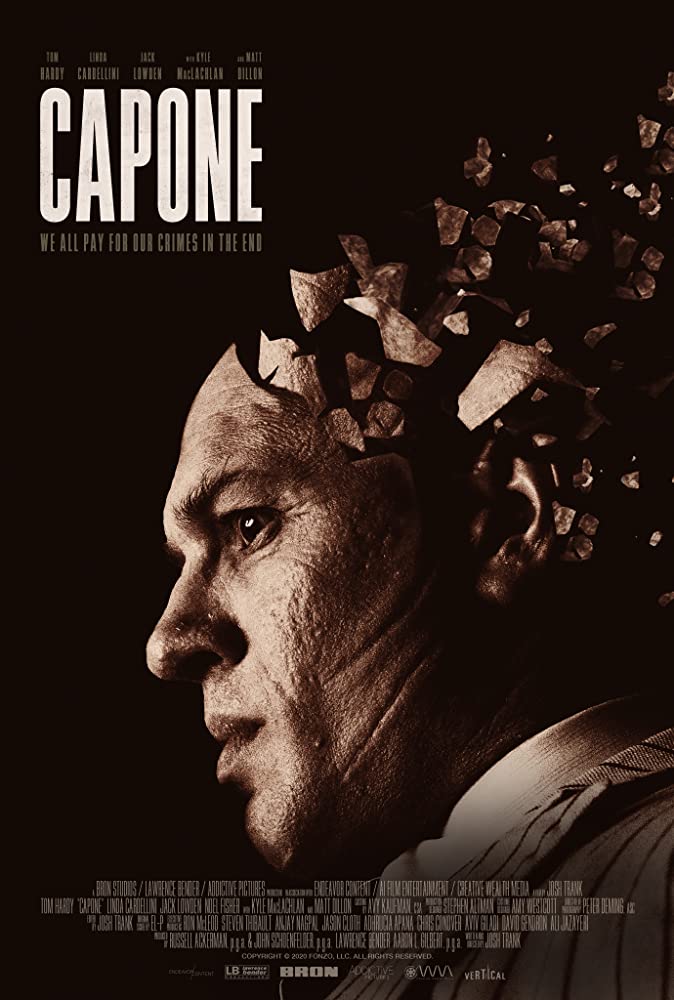 Have you ever heard about the concept of director jail? Basically it’s the idea that if a director proves to be untrustworthy, either by delivering  massive flop or by difficult to work with personally, they kind of lose their personal cache in the industry, and find themselves unable to actually make any more movies, getting a sort of “time-out” until they can maybe score some sort of comeback and get taken seriously again. It happens all the time, and it’s always interesting to see what kind of project a director will take when they find themselves seeking parole from director jail. Which brings us to Capone, the recently released film from director Josh Trank. If you’re unfamiliar with Trank or his films, there’s actually a fascinating article that has been written about him up on Polygon right now that charts his entire career, and while being a really compelling piece of writing it really solidified in my mind that Josh Trank is not the kind of film-maker for me. Which, wasn’t exactly in question. This is only Trank’s third feature film, but his career has been a weird one. Gaining prominence after his found-footage superhero movie Chronicle, which people apparently liked alright, Trank segued this success into getting his hands on a reboot of Fantastic Four, which led to the destruction of his career, and quite possibly the worst superhero movie I’ve ever seen in my life, which I’ve actually talked about before on the site. And, after that hilariously bad movie, Trank kind of vanished. He was taken off a prospective Star Wars movie, and just kind of faded away. Until now. Because he’s back with a vengeance, ready to free himself from director jail with the help of Tom Hardy reaching the logical conclusion of his fascination with gangsters by playing perhaps the most infamous of them all. And yet, I think at the end of the day we all really just need to reject with request for parole.

The film is a look at the final days of Al Capone, one of the most famous gangsters of all time. Not a look at the height of his powers, running Chicago with a bloody fist, nor his time spent in prison after finally getting busted for tax crimes of all things. No, this film takes place entirely in the final years of his life, after he was released from prison and rotted away in Florida, dying of syphilis and dementia. Capone has become a shell of his former self, sitting in his mansion with his long-suffering wife Mae and slowly declining. But, the FBI are convinced that this whole thing is an act, and keep a constant watch on Capone, not really helping with the incredible paranoia that his various conditions are causing. He just kind of shambles around, smoking cigars and losing his mind, assuming that everyone around him is out to get him. And, what’s more, we find that Capone seems to think that he hid a substantial amount of money before getting busted, which is the last thing that can keep him and his family afloat. Unfortunately, his addled mind can’t remember where he hid the money, or if it even exists. So, he just kind of sits around, soiling himself an getting progressively more unhinged as various people come and see him.

For a while his family and fellow gangsters come visit in order to lift his spirits, but Capone continues to diminish and gets more and more violent, leading Mae to declare that no one is allowed to see him. He had been spending a lot of time with a friend named Johnny, having fun drinking together and shooting crocodiles, but we end up realizing that Johnny is a figment of Capone’s imagination, meaning the only person who actually does come and visit is a doctor who seems to just be there in order to get Capone to admit where his money is hidden. And, as Capone continues to fall apart, reaching the point where he can barely speak and mainly just sits around soiling himself, he starts to have vivid fantasies and flashbacks to his life of crime, regretting the carnage he caused, and the people whose lives he destroyed. He also begins to feel immense guilt about the illegitimate son he had who he’s never talked about. And, eventually this decline reaches a fever-pitch when an addled Capone stumbles upon an old Tommy gun and begins firing it on the various people working in his mansion, assuming that they’re all coming to kill him. And, as a diaper-clad Capone mows down the only people close to him, he finally collapses, and falls apart, spending the rest of his life as a shambling mess before finally dying, leading most of his family to abandon his name. 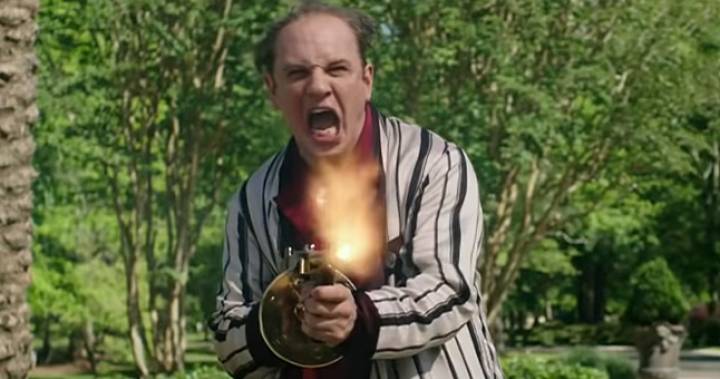 I’m seeing some people reacting pretty positively to this film, largely in part to how ridiculously over the top it is. That image of a diaper-wearing Capone screaming and firing a gold-plated Tommy gun certainly has all the hallmarks of an ironic Twitter meme. And as with a lot of Tom Hardy’s most ludicrous performances, it’s incredibly ridiculous and hammy, which seems to draw in a certain type of person. But, I guess I’m just not one of those types of people. Venom didn’t click with me, and Capone certainly didn’t. I’ve really liked Hardy in things, but this phase of his career that seems dominated by insane choices and barely intelligible accents and voices just doesn’t do much for me. Especially when the world around him isn’t as cartoonish as he is. Capone is structure like a sappy drama about people coping with the mental decline of their elderly relative, and it just really feels out of place when Tom Hardy comes waltzing in with his insane makeup and voice, acting like a cartoon character. Some of the flashback and fantasy sequences are interested, and actually demonstrate some skill, but by and large it’s a dull film that just feels like a bad stage production. And, ultimately, it’s just kind of an ugly little movie that seems like a baffling choice to make.

Al Capone is certainly not a figure to be idolized. He was a vicious murderer who profited off of violence and vice, and ended up dying after an incredibly terrible illness. And yet, people love movies about gangsters. Yeah, there are plenty that become weird little power-trip fantasies where people get to vicariously live the life of a powerful gangster, and there are some films that end up becoming something of morality tales, trying to show you why a life of crime doesn’t pay. Which, seems like maybe the way to go with a movie about Al Capone. But, to instead decide that we’re going to just look at him as his brain falls apart and he hurts those around him, feeling some slight guilt for the crimes he’s committed, but generally just wanting to find money so he can be rich again, certainly was a choice. I just can’t really wrap my mind around why this is the story of Al Capone that needed to be told. It just feels a little gross, seeing a movie about a real person who existed, and just spending the entire time having him shit himself and fall apart, like we’re supposed to feel like he’s getting some sort of comeuppance. The decline of a human being is a terribly tragic, but unavoidable thing. And, there are plenty of movies that look at death and illness in an insightful way. That’s something that can work. But to build an entire movie around watching someone’s painful decline and death, seemingly just because it’s funny, is really uncomfortable. If it works for you, I’m glad. But Capone just really rubbed me the wrong way.

Capone was written and directed by Josh Trank and released by Vertical Entertainment, 2020.