After the last two week’s….unpleasantness, I wasn’t exactly champing at the bit to tackle more Simpsons here on the site. We’ve almost crossed another seasons off the books, but two of the worst episodes I’ve ever seen have certainly taken the wind out of my sails. Which, may have had some effect on my opinions on this movie, or it may have just been a rather solid and sweet little episode that actually made me remember why I liked this show.

The episode begins with Homer having a chat with his mailman, who is begging Homer to actually take in his mail, which has been accumulating in his mailbox for weeks. Homer explains that mail is stupid, and so is the Post Office, which really feels extra shitty in the current moment when Republican negligence is threatening the destruction of the Post Office as we know it. And, after squabbling, Homer relents and bring in his solidified chunk of mail.

He calls the family together to dissect the mail-clump like an owl pellet, and in the process Lisa finds an invitation for her to come to a sleep-over birthday party for a girl named Addy. The family seem confused that Lisa has apparently made a friend they aren’t aware of, and Lisa explains that she’s a friend from the library. They apparently met and boded over a mutual love for some old series of books about horse-girls.

Lisa then starts getting ready for the sleep-over, which is apparently imminent, and stars packing up a bunch of horse stuff, to be on-theme. And, while he’s packing, Bart wanders in and starts giving Lisa shit about liking horses and being so basic. The two begin squabbling and fighting, and in the process Bart ends up knocking over a whole shelf of horse toys, many of which break. Lisa freaks out at Bart at this point, and wishes that they could stop being siblings. And, liking that idea, Lisa officially severs any sort of familial bond between them, no longer viewing Bart as her sibling.

Homer and Marge then head out to take Lisa to Addy’s party, and everyone is shocked to find that it’s a mansion because Addy’s dad is some sort of ketchup magnate. She then begins showing Lisa around her mansion, while Homer and Marge decide to sneak off to some weird sunset booze-cruise since Lisa is occupied for the evening, and Grandpa is taking care of Bart and Maggie.

While Addy shows Lisa around, she shows her something amazing. Addy’s family have a whole bunch of horses. Addy shows Lisa how to ride a horse, and the two go for a trot. However, while on their ride they encounter a trio of mean girls, little tween influencers who immediately start picking on Lisa. She’s incredibly put off by that, but Addy confides that the girls aren’t really as bad as they seem, and tells Lisa that she’ll get to be friends with them during the sleep-over.

But, that doesn’t end up being the case. The girls are mean to Lisa the whole time, and she’s really unsure how to act around them. Especially when it’s time to give gifts, and Lives gives Addy some cheap little plastic horse. They start mocking Lisa for being poor, and she ends up sneaking away to call Homer and Marge to ask them to come pick her up. Unfortunately, there’s terrible reception on the booze cruise, so they don’t understand, and think that she’s having a great time.

Lisa does try to find another adult to help her, but the only adult in the house is a party planner, and the girls treat her just as terribly, so Lisa is adrift. The girls then force Lisa to watch some risque CW-esque show about a bunch of teenagers being obsessed with suicide, which she isn’t allowed to watch. She tries to cover her eyes at some of the darker stuff, but the girls end up recording her doing it, and start mocking her on social media.

Lisa can’t take it anymore, and ends up going and hiding in a bathroom, trying again to get in contact with Homer and Marge. And, while hiding she end up being found by Addy. Lisa talks with her, asking why she’s letting the girls be so mean, and Addy explains that they’re usually mean to her, and she invited Lisa so that they could be mean to her instead, and she could be popular for once.

Lisa’s pretty disgusted by this, and ends up calling Grandpa as a last-ditch effort for help. But, Grandpa is asleep, and Bart ends up answering the phone. Lisa starts crying, and tells him what’s going on, and at first he starts mocking her, telling her he won’t help because she un-brothered him earlier. But, when Bart overhears the girls being mean to Lisa, something inside of him snaps. He calls up an Uber, driven by Principal Skinner, and heads over to save her. Bart arrives while Lisa is hiding, sad and alone, and she wants to run away with him as fast as possible. But, Bart won’t let Lisa leave without a little revenge. Because if she runs now she’ll never stop running, and she needs to learn to stick up for herself. So, the two begin brainstorming, and Lisa ends up deciding that she’s going to sneak into the room where the girls are sleeping, and use some “hoof hardener” to turn their hair into rocks. It works well, but when Lisa goes to take a picture of their brittle hair, we see that Marge has finally seen all the calls, and calls Lisa’s phone.

Things have been weird at the booze-cruise, and it reached a fever pitch when Homer got mad that the band wasn’t hitting on Marge enough. He got in a fight that ended with him dumping all the booze overboard, at which point everyone got ready to beat the shit out of him. But, Homer saved the day by giving a speech about how adults making special plans is stupid, and that they should all just be happy doing nothing at home.

Unfortunately, when Marge calls Lisa it ends up waking the girls up, who realize that Lisa has ruined their hair. They begin chasing Bart and Lisa, who attempt to flee in their Uber, but find that Skinner has left them for a better ride. So, they decide to flee on horses, and we learn that Bart is actually terrified of horses, and that’s why he was so combative earlier.

Lisa talks him through his fear though, and they flee into the night, with Addy and the other girls giving hot pursuit. And, since the mean girls actually know how to ride horses, they quickly catch up and surround Bart and Lisa. The three bad girls then start plotting revenge, while Lisa tries to reach Addy, and get her to help them. And, Lisa ends up winning. Addy helps stop the bad girls while Bart and Lisa flee into the night, pleased with their sibling relationship. And, logically, the episode ends with a Weezer music video. 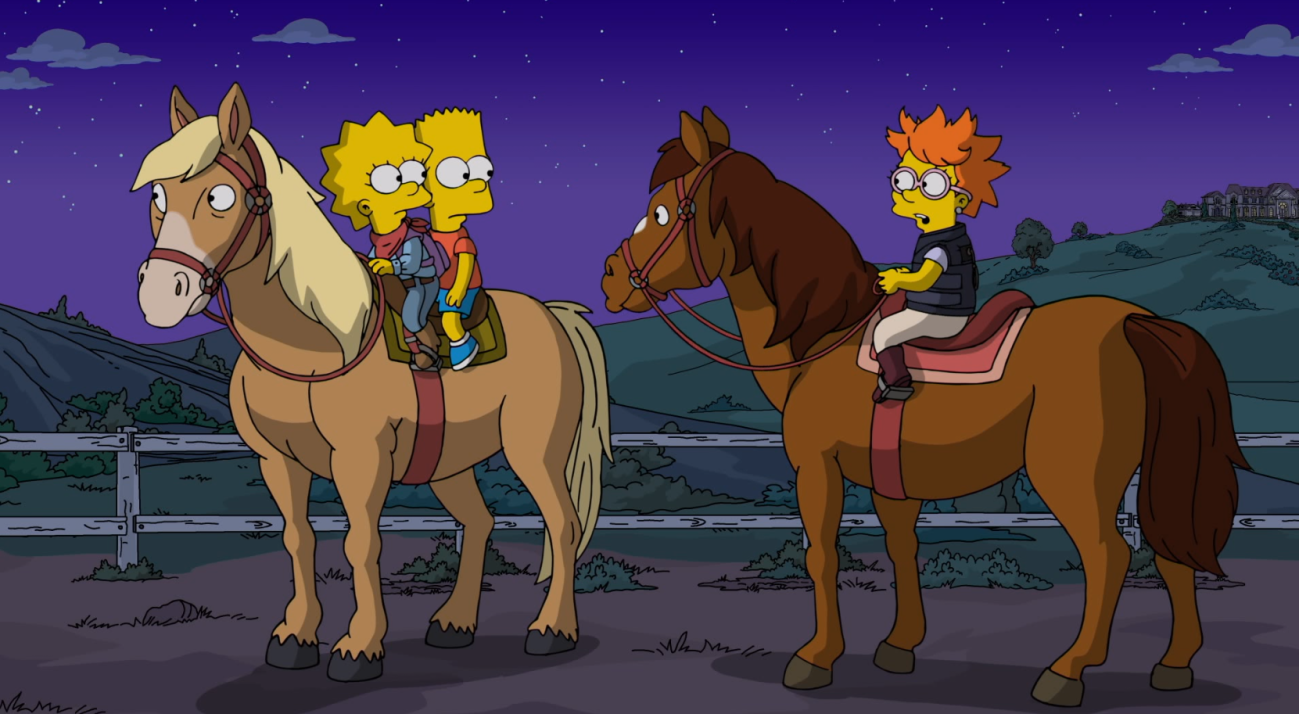 Listen, it’s entirely possible that my affection for this episode is skewed by the absolute frustration that I’ve had with the show for the past two weeks. But, I think even putting aside those extenuating circumstances, this is a really fun little episode. I love Bart and Lisa’s relationship. It’s made for the some of the best and most emotional episodes the show has ever produced. And, this one plays around with a concept we haven’t really seen that much, Bart sticking up for Lisa no matter what. The moment when Bart realizes that despite their little squabble that Lisa is being picked on, and he turns into the goddamn Terminator is pretty amazing. The rest of the stuff, with the mean girls, and especially the Homer/Marge booze cruise, is just kind of fine. But, when the episode gets into that good Bart and Lisa relationship stuff it really sings.

“The Hateful Eight-Year-Olds” was written by Joel H Cohen, directed by Jennifer Moeller, 2020.

Tagged as: 2020, Lifetime of Simpsons, Season 31, THe Hateful Eigh-Year-Olds, the Simpsons