I’m still playing a little bit of catch-up here on the site now that I’m back from my little sojourn, which means we get a double dose of the Simpsons this week. Earlier this week we got to talk about a pretty fun little episode that I found myself quite charmed by. And, we’re ending the week with an episode that I really, really didn’t like. As you can tell from the name alone, this is a weird one. So, I’ll do my best not to devolve into a rant, and try to talk about this episode.

Things begin with the Simpsons attending an essentially empty church service. It’s basically just them, the Flanders’, Sideshow Mel, and a bunch of old people with nothing better to do. Hell, not even the choir shows up. Things seem grim at the First Church of Springfield, and Reverend Lovejoy really doesn’t seem to have any idea on how to fix this situation. He tries to be a little peppy, but that just results in people literally praying to be Raptured.

However, in the middle of Lovejoy’s sermon we cut outside of the church, and follow along a young man carrying a guitar case, paying people’s parking meters. He stops and chats with Chief Wiggum, asking for directions to the local church, making it pretty clear that he’s some sort of travelling preacher. He then shows up at the church right as Lovejoy has finally wrapped things up, and everyone is fleeing for their lives.

The man, whose name is Bode Wright comes strutting into the church while Lovejoy is frantically going through his collection plate earnings, and introduces himself as a theology school graduate who is here responding to a job opening for a youth pastor. Lovejoy is confused by this, but it turns out that Helen has taken it upon herself to try and spice up the church by getting a youth pastor.

Lovejoy isn’t really into hiring this guy, and seems suspicious about him, but Helen just kind of over rules him, and Bode gets hired. And, what’s more, she offers for him to stay at their home for a while. Which, does get the chance for Bode to get tormented by Lovejooy as he harasses him with his model trains, which I guess is fun.

But, it does kind of look like Reverend Lovejoy does need some help, because he’s really just starting to phone it in. We see him try to give the Simpsons some marriage counselling, because why seek out a professional for that sort of thing, and he just kind of brushes it all aside, since he’s apparently heard all of their problems before and has nothing new to provide them.

Things take a bit of a turn though when Lovejoy forces Bode to accompany him to the Retirement Castle where he helps them play bingo. And, while announcing the balls, Lovejoy is suddenly struck with some strange coughing fit, that he fights through instead of asking Bode for help. And, whatever’s the matter with him continues into Sunday, when Lovejoy gets ready for another empty sermon, and just can’t speak at all.

The choir director suggests just ending church early, which everyone is own with, but instead asks Bode to preach instead. So, Bode gets up to the pulpit and begins giving a fairly rambling sermon full of him singing and playing the guitar while cracking extremely mild jokes. And, while Ned certainly seems to despise it, everyone else is into it, especially Lisa for some reason.

And, for some reason this sermon is able to summon people from all over Springfield to come join the church, mid-sermon. Which is insane, especially because it’s all just a very long ramble about doubt and suffering in the world. Which is really when I started to dislike this episode, because it’s just a bunch of empty platitudes that feel like we’re in some sort of paid sponsorship for Christianity.

By the time Bode finally wraps things up we see the whole damn town in the church, and they love it. Ned tries to kiss Lovejoy’s ass a bit, but people literally start cheering for Bode. He even gets to say grace at some bizarre pancake brunch that happens after church with a slew of random parishioners. Which of course culminates in him bonding with Lisa about jazz. People are hanging on his every word, which is primarily just him telling another long story about a Chinese proverb. Lovejoy does try and spice things up with a racist joke, but it doesn’t go over well.

So, the church council decide that it’s time for Lovejoy to move on. They storm into his office and inform him that he’s being fired, and they’re putting Bode in charge, which you’d think would be handled by some sort of higher governing body in the church politics, not just random folks who attend the church, but whatever. Lovejoy is out, and he decides that it’s all Bode’s fault. So, he’s going to drive to Michigan, where Bode last lived, and dig up some dirt on him to ruin his life too.

Which beings Bode’s reign as the leader of the First Church of Springfield. And, he starts things off by doing some couple’s counseling with Homer and Marge, which primarily consists of him passing the buck and having them literally wear each other’s shoes and do all the work by themselves. But, it works. He then sets up his new office, which looks like a stoner college student who did a semester abroad in Tibet.

But, he does get to have a weird hang-out/meditation session with Lisa, which actually does become a little impressive because it shows her essentially reaching nirvana, and is accomplished with some really cool animation. And, by then time she comes back down, she announces that Bode has triggered a religious revival in Springfield, and is a hero. But, the episode ends on a cliffhanger, because this is insanely a two-part episode, with Reverend Lovejoy seemingly finding some horrible dirt on Bode. 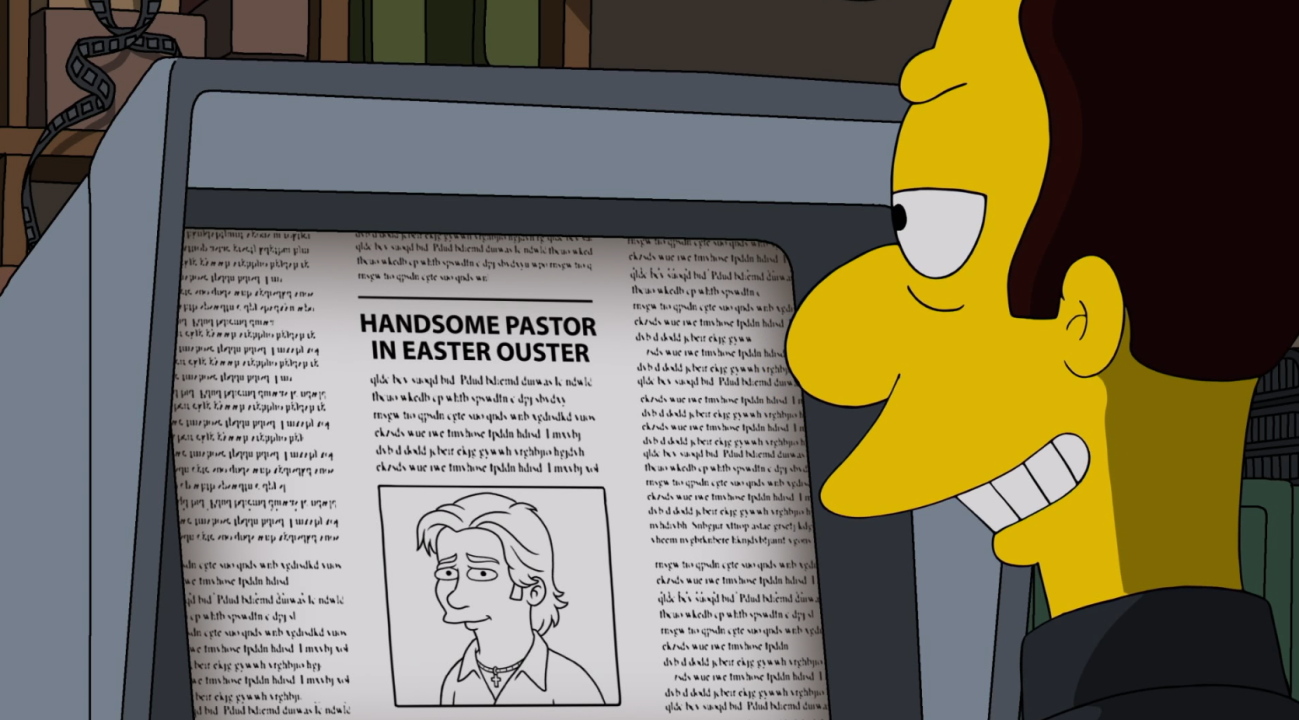 This episode frustrates me to no ends. I try not to look at other people’s reactions to episodes until after I formulate my own thoughts, so I have no idea if I’m in the minority here or not, but this episode really rubs me the wrong way. It reminds me of that torturous Lady Gaga episode, which was essentially just a commercial for Lady Gaga. But, instead it’s just an insane vanity project from Pete Holmes, who I wouldn’t think is famous enough to dictate this sort of thing. He wrote both of these episodes, and stars as Bode, and I just can’t understand why these episodes exist. It’s just a rambling excuse for Holmes to talk about religion endlessly, making an episode that feels like it has no plot, and is only a two-parter because his rambling speeches took up too much of the runtime. It’s all just empty platitudes, and it’s entirely possible that this is just my general distrust of organized religion talking, but it just feels condescending and obnoxious. The Simpsons has always been a slightly conservative show. It likes to poke fun at conservatives, and laud some more liberal ideology, but it’s still a show that airs on Fox, that’s about a family where a man works and the woman stays at home, and where they go to church every Sunday. But, lately it feels like the show has fallen into a trap where the folks behind it, who used to be hip and with it, are now grouchy Boomers complaining about the kids today. They’ve slid further into a weird nostalgic conservatism, and this episode just feels like another symptom of this. Who knows, maybe there’s some amazing reveal in the second episode that will save it, but as of now this is perhaps one of my least favorite episodes of the Simpsons I’ve ever seen.

“Warrin’ Priests : Part One” was written by Pete Holmes and directed by Bob Anderson, 2020.

Tagged as: 2020, Lifetime of Simpsons, Season 31, the Simpsons, Warrin Priests: Part One